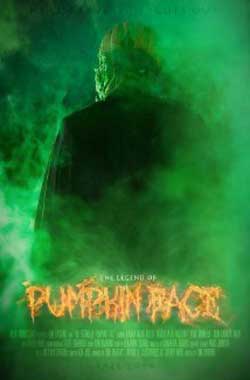 As Halloween nears, a group of people begin to realize that the stories of a pumpkin faced killer are more than just an urban legend.

Perhaps the most appropriate way to introduce this film is to quote their Buzzfeed page, ‘This is what happens when pumpkins decide to carve back. Viewer discretion is advised. Contains images of gore, sexual content, and incredibly awesome scenes.’ Now I love a bit of quirkiness as much as the next guy, and The Legend of Pumpkin Face definitely had some ‘moments’, but mostly I just found it a tad dull.

Horror is perhaps one of the main genres who recycle the same old stories and characters and formulas – because people love the familiar! I’ve lost count how many horror movies start with a bunch of teenagers sat round a fire, musing over some ‘urban legend’ which eventually ends up killing them one by one as the film progresses…and guess what? This is exactly how The Legend of Pumpkin Face begins as well. It’s not necessarily a problem in itself (as there are tons and tons of culprits for this), but there didn’t really appear to be a single unique selling point of this short film. Whilst I get the appeal of the cheap ‘Z movie’ approach, some things don’t turn out bad funny, just bad bad, unfortunately.

I did think that there were some clever cinematography choices here, not giving the viewer a proper look at ‘Pumpkin Face’ so as to add a sense of mystery and tension to the film. However, none of the characters felt likeable or even believable, and the story didn’t really flow. I didn’t like the acting as it just felt awkward, almost like a college film project as opposed to an actual professional creation.

Having a look on IMDb, Tom Barrows (writer & director of The Legend of Pumpkin Face) is still quite new to the industry, especially in the world of horror, so perhaps there lies some explanation. It did look like everyone had a lot of fun making it though, and the special effects had a cool DIY feel to it – like Sam Raimi and The Evil Dead back in 1981.

They’ve put up behind-the-scenes photos on their Facebook page which I always find interesting to look through, as it gives an insight into each step of the journey to achieve the final film we end up seeing!

For those who like independent horror, with all the cheese and cringe that comes with it, then perhaps The Legend of Pumpkin Face was designed for you. Its lack of budget is screamingly obvious and it cannot hide its amateur status, but there is passion present there – no one can deny that! I just found it too farcical to be enjoyable, with not enough focus on the horror or the comedy aspects to it.