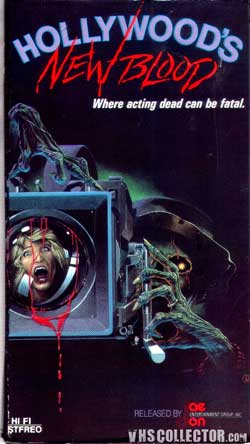 A group of actors on an acting retreat in the middle of the woods are stalked and killed by a trio of homicidal brothers.

I’m always going on and on about all the great slasher flicks that came out of the 1980’s but sometimes I forget that there were a lot of terrible ones too. Hollywood’s New Blood definitely belongs in the bad group as it is quite horrible and has almost no redeeming qualities whatsoever. It’s a real train wreck of a film that has a boring, unoriginal premise, awful acting, and some of the worst death scenes I’ve ever witnessed (thanks to the fact that they are mostly non-existent). I thought that it was quite horrible and after watching it I think that I want my hour and a half back that I wasted watching it. 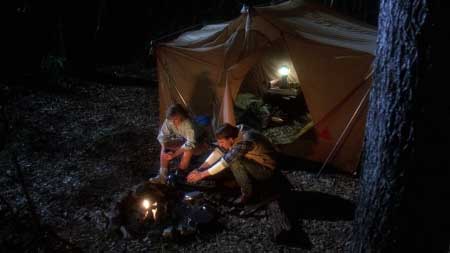 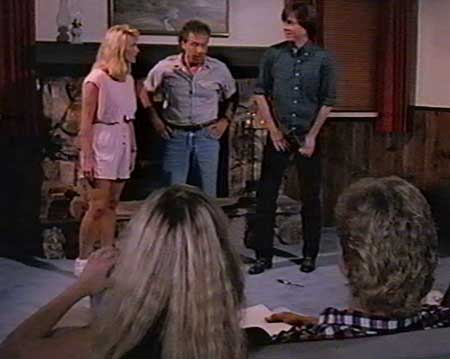 I’ve always heard nothing but bad things about it and after watching it for myself and can say that all the negative reviews that I’ve read about it were spot on. I was always a little curious about it as I didn’t think that it could possibly be as bad as everyone said that it was but now I know for sure that these reviewers were telling the truth. Hollywood’s New Blood has a lot of flaws and it is one of those films that is so bad that you can’t even enjoy it by laughing at it and even making Mystery Science Theater3000-like comments at its expense while you’re watching it doesn’t help. I was bored out of my mind while watching it and couldn’t wait for it to be over. I hate to dog on any slasher flick (especially ones that were made in the 80’s) but I just couldn’t help it this time around.

One of the biggest problems that I had with the movie was the fact that the death scenes sucked out loud. None of them actually took place on screen and we pretty much see someone about to be killed and then it cuts away over and over again. We see the aftermath of a few of the deaths but to be honest they are nothing to write home about. I don’t know if the filmmakers didn’t have money in the budget to actually show anyone getting killed or if their special effects person was just lazy and untalented but there isn’t a decent death scene to be found anywhere in the entire movie. 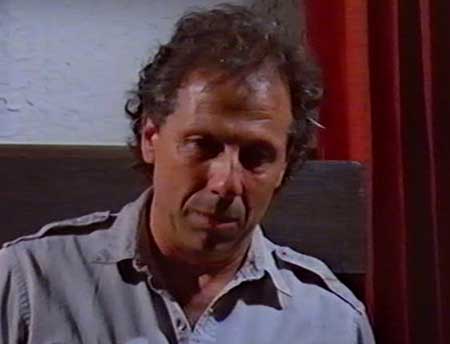 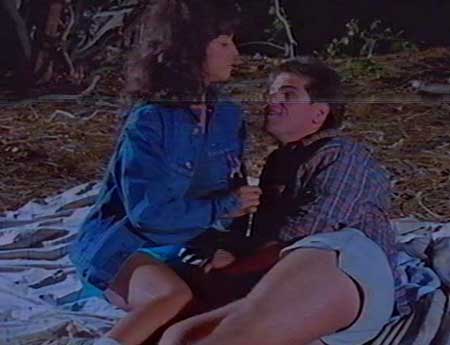 One of the main reasons that I dig old school slashers is because they usually have some awesome death scenes but that wasn’t the case this time around. Besides that the deaths were pretty unoriginal and just involved someone being stabbed with a small knife, which was pretty lame in my opinion. The only one that tries to be different involves someone being stabbed in the face with a skull that has somehow been sharpened (?) and it is one of the most idiotic and silly deaths ever. If you watch this movie expecting one fun and bloody death after the other you are most definitely going to be disappointed.

The acting in Hollywood’s New Blood is some of the worst that I’ve ever seen too. I don’t think that there was a single person in it who could act his or her way out of a wet paper bag and most of the people in the movie seemed to be reading their lines off of a cue card that was placed just right outside of camera range. 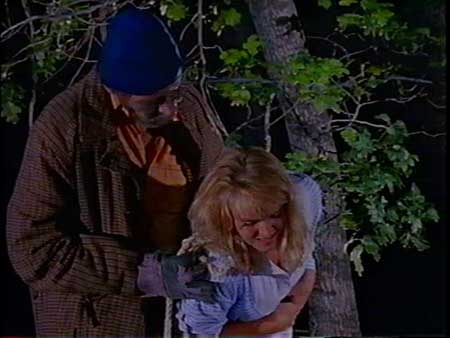 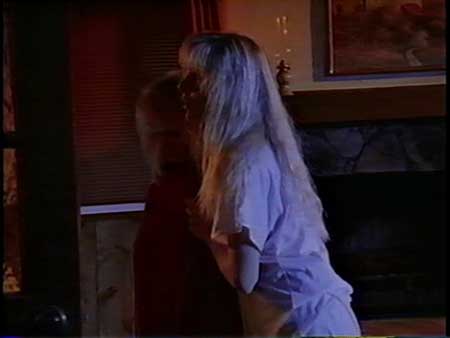 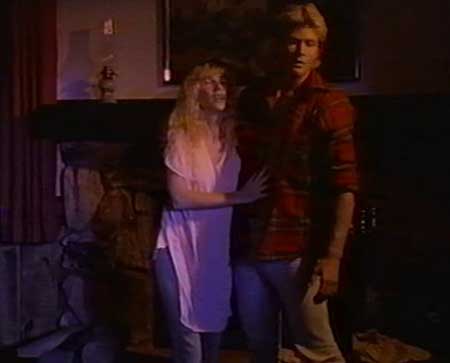 The main characters are lame and unlikable and the three killers are just plain bad in general and are not intimidating whatsoever. I like the fact that they have supposedly been wandering around in the woods for ages since their home was blown up years earlier but for some reason they are wearing what appear to be fairly new and somewhat clean clothes (I guess there is a laundry mat in the middle of the woods that they visit on a regular basis).

Their back story (which involves their house being accidently destroyed by a group of filmmakers who were filming a movie in the area) had promise and I was actually almost into the movie until they popped up on screen for the first time and saw how ridiculous that they looked and acted. Jason Voorhees they aren’t and if I saw one of them coming at me with a knife (especially the one who seems to be the leader) I think I would be more inclined to laugh than anything else.

Overall Hollywood’s New Blood is quite the stinker. There is no blood and guts, no nudity, and has really nothing going for it other than the fact that one or two of the women in it look pretty good in an 80’s sort of way. I wasn’t impressed by it and honestly don’t think that anyone else who watches it will be either. It isn’t the absolute worst slasher flick I’ve ever seen but it’s pretty damn close. Check it out if you don’t have anything better to do but keep in mind that it is quite lousy.