With a teleplay by Richard Christian Matheson and directed by Mikael Salomon, Big Driver will be available on DVD for the suggested retail price of $14.98.

Tess Thorne, a famous writer, faces a long drive home following a book signing. While driving on a lonely New England road, her tire blows out, leaving her stranded. Relieved when another driver stops and offers assistance, Tess quickly discovers her savior is actually a serial killer who repeatedly assaults her. She is determined to find her rapist and seek revenge, as payback is the only thing holding her together. 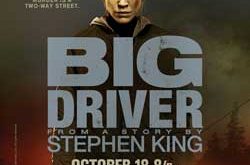