Book Review: Steven Spielberg and DUEL – The Making of a Film Career 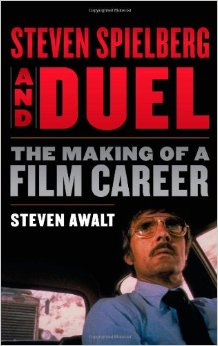 Steven Spielberg’s Duel is a film that was made by Universal Pictures as a “movie of the week”. Shot on a shoestring, Duel premiered on Saturday, November 13, 1971 on ABC-TV.  The film garnered sterling notices from the get-go and had far more admirers than detractors.  It was instrumental in putting Mr. Spielberg on the path to a career in feature filmmaking, something he wanted since he was a child.  A minimalist film about an unassuming salesman menaced and ultimately terrorized by the driver of an oil truck for reasons unknown, Duel would also prove to Hollywood producers David Brown and Richard Zanuck that Mr. Spielberg could make their script of Jaws more than just a simple adventure tale.  Jaws was similar in theme to Duel in that a seemingly unstoppable monster is eventually put down following a relentless chase of cat-and-mouse. 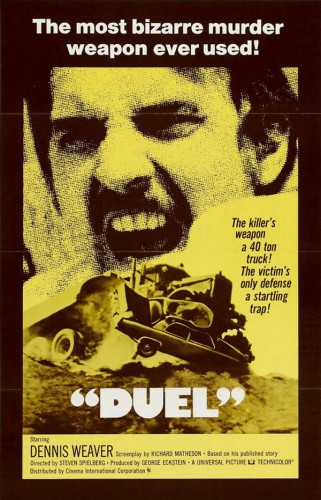 Steven Spielberg and DUEL: The Making of a Film Career is an excellent book now available in hardcover, paperback and for the Kindle from Rowman & Littlefield Publishers which tells you everything you could possibly want to know about Duel and what went into making it.  Painstakingly researched by Spielberg fan Steven Awalt who ran a Spielberg fan site on the Web for nearly ten years, the book starts at the beginning with the author of the short story that the film is based upon.  Richard Matheson, the man responsible for some of the most interesting and frightening short stories of the genre, also contributed to some of the best episodes of television’s The Twilight Zone (1959 – 1964).  He experienced a terrifying, real-life incident that compelled him to write Duel, and Mr. Awalt recounts this fateful incident which occurred on November 22, 1963 of all days.  Published in the April 1971 issue of Playboy magazine, Duel made its way into the hands of Steven Spielberg’s secretary.  Through interviews with the remaining crew members who worked on Duel, Mr. Awalt covers every aspect of the film’s inception and creation.  Duel originated as a TV-movie, and it’s through-the-roof Nielsen ratings and excellent critical reception resulted in the studio giving the director additional money to shoot more footage to increase it from its standard 74-minute running time to the more acceptable 90-minute length it required for release in movie theaters.  The film played theatrically in Europe following its television premiere, however U.S. audiences would not see the longer cut until a brief release took place in the spring of 1983 in selected markets.  It is this 90-minute version of the film that is known the world over, although fans should be given the opportunity to see the original 74-minute cut.

Illustrated with storyboards created by the director as well as publicity photos, Steven Spielberg and DUEL is the definitive word on this terrific thriller that the director originally wanted to make without any dialogue (interestingly, the Twilight Zone episode The Invaders, also by Mr. Matheson, was originally conceived this way).

This book makes an excellent companion piece to the newly released DVD and Blu-ray sets from Universal called Steven Spielberg Director’s Collection. Duel is included in these sets, and the Blu-ray is gorgeous. 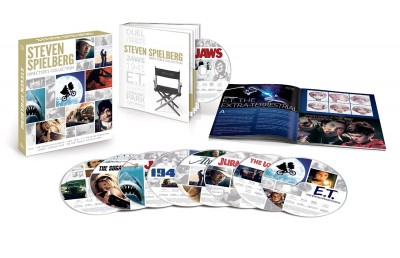 Click here to order the DVD and Blu-ray sets.