For this week, where Halloween and Election Season somewhat fittingly intersect, Knack Factory produced a half-serious, half tongue-in-cheek voter guide. 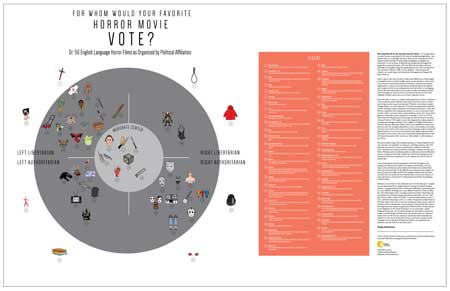 To keep things manageable, we applied two parameters to our process of selection by considering only English language films produced between 1974 and 2014. (If this seems arbitrary, remember that Stephen King only talked about horror films and literature from between 1950 and 1980 in Danse Macabre—then ask yourself whether you would argue with the patriarch-boogeyman of Bangor. We didn’t think so.)

Horror fans to the core, we had to make some difficult cuts. These largely included films from the 70s and 80s, which are the decades in which most of our favorites were produced. We trimmed our initial pool somewhat significantly to create an even distribution of films produced throughout each decade, and did so by omitting those that had similar or overlapping themes. We were particularly sorry to see so many Cronenberg and Carpenter films get cut. They are two of our favorite directors and we had originally included nearly every one of their respective works.

Films that take no stance, or several conflicting stances at once, are plotted in the moderate center. Hellraiser finds itself in the exact center as Supernatural queer police squad commissioner Pinhead—according to essayist Douglas Sparks—at once represents “Christian theology, deviant sadomasochistic sexuality, mystical asceticism, and entrepreneurial spirit.” Films that fall into a quadrant while making their points in a more round-about fashion than others are found closer to the moderate center than those which appear to make their points explicitly. For example, it is the sum of The Texas Chain Saw Massacre’s parts that imply its Left Authoritarian leaning, whereas Friday the 13th makes its point less elegantly by making targets of transgressive teenagers, landing it more rigidly in the Right Authoritarian camp. Outliers are films that simply could not be classified no matter how hard we tried. For example, taking what is now a commonplace worldview, The Omen was critical of the entire structure of popular politics, writing off political power as as a tool of the Antichrist. Our English-only parameter also saved us from some of the more wonderfully inexplicable horror films of the last forty years, which remain our white whales—we’re looking at you, Hausu.