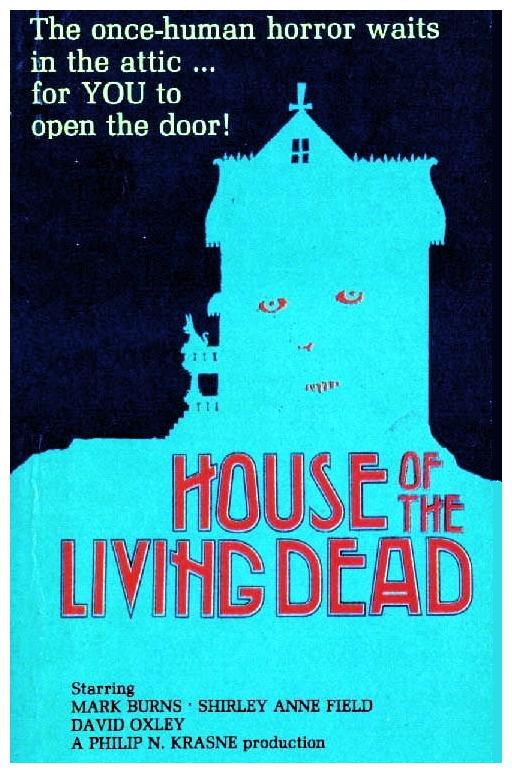 SYNOPSIS:
“A mad scientist (Mark Burns) is conducting hideous occult experiments at the family estate of Brattling Manor, monkeying about with things man was not meant to know, including the transfer and containment of living souls. It’s only a matter of time before he begins to experiment on the souls of human beings – including his own family.” (courtesy IMDB)

REVIEW:
The first graphic novel to feature the famous Hellboy, created by Mike Mignola, was entitled House Of The Living Dead and features the ultimate wrestling match between the Frankenstein monster and the hero with the red right hand. I’m sure you’ll find it difficult to hide your disappointment when I inform you that this week’s subject, House Of The Living Dead (1974) has absolutely nothing to do with Hellboy, but is in fact yet another film with a misleading title. If that wasn’t misdirection enough, with a ‘Living Dead’ title and set on a plantation, you’d expect it to be absolutely chockablock full of zombies, but no, not a zombie to be had! When victims die, they stay dead.

As if to make up for this lack of undead, it was re-released as Doctor Maniac, but Joyce Brothers threatened to sue, so they changed it to Kill Baby Kill, but people thought that was a training video for English nannies, so they just gave up and changed it back to House Of The Living Dead. This gives further credence to my theory that the more titles a film has, the worse it is, but the title’s not important. All you need to know is that there’s mad science involved, mixed with a little voodoo and a family curse. With all that going on, how could you go wrong? Spectacularly, as it turns out, as you’ll no doubt notice while watching Mark Burns, Mark Burns and some people that aren’t Mark Burns, in Ray Austin’s ode to sibling rivalry, House Of The Living Dead! (*zombies not included)

I could try to justify spending ninety minutes of your precious life watching this, but the fact is I can only try to keep your interest piqued, and the most interesting person attached to this week’s debacle is director Ray Austin. Austin started as a stuntman in big-budget Hollywood productions like North By Northwest (1959) and Spartacus (1960), going on to direct dozens of your all-time favourite television shows…and some real stinkers too. House Of The Living Dead represents the fourth and final feature film directed by Austin and, with titles like One Thousand Convicts And A Woman (aka Story Of A Nympho 1971) and Virgin Witch (aka Lesbian Twins 1972), you can understand why producers stopped giving him money. So he went crawling back to video until retiring in 1999 – he’s still alive, which only goes to show the good do indeed die young.

The second most interesting person attached to tonight’s production is South African cinematographer Lionel Friedberg, who went on to become an award-winning documentary filmmaker showing mammals doing what they do on the Discovery Channel, the History Channel and the National Geographic Channel. In 1986 he moved to the USA to produce his films, no doubt finding their mating rituals far more fascinating and mysterious. You’ll be happy to hear Friedberg is still alive and well and heavily involved with animal welfare, vegetarianism, and the fight against apartheid. Unfortunately, the talent in front of the camera is not as impressive.

Mark Burns is challenged by the duel role of brothers Michael and Breck (a strange first name indeed. I can only assume his father sneezed during the christening). Originally Burns wanted to become a priest, but God said ’No’ so he sold his soul to Satan instead to become a diabolical actor, starting with the film Tunes Of Glory (1960) followed by television shows like Lorna Doone, The Saint and The Prisoner. You might be surprised to hear that, despite appearing in such classics as The Charge Of The Light Brigade (1968) and Death In Venice (1971), he considers his dual role of Michael and Breck his real breakthrough, probably because he was awarded Best Actor at the Sitges Film Festival – it must have been a pretty slow year. After appearing in Count Dracula (1977) and The Bitch (1979), his career stagnated during the eighties and nineties, his final film being the star-studded Stardust (2007).

Mary Anne is played by Shirley Anne Field, whose first decent role was in Michael Powell‘s classic psycho-killer movie Peeping Tom (1960), followed by Wild For Kicks (1960) with Ollie Reed – and who hasn’t been? She was then chosen by another old drinking buddy Larry Olivier for a featured role in The Entertainer (1960), followed by Saturday Night And Sunday Morning (1960) and the cult classic These Are The Damned (1963). She took to the stage after Alfie (1966), finally returning to the silver screen two decades later in the highly successful My Beautiful Laundrette (1985), and on television in Lady Chatterly (1993) directed by my old smoking buddy, little Kenny Russell.

Bill Flynn, who plays Simeon, is one of South Africa’s most successful actors ever. Equally at home in comedy or drama, he’s had leading and supporting roles in dozens of films and hundreds of plays and TV shows but, unfortunately, this is his first film so none of that future experience counts in House Of The Living Dead. Nevertheless you can be secure in the knowledge that he went on to win fourteen(!) South African Best Actor awards as well as winning the country’s top screenwriting award for Saturday Night At The Palace (1987). If that wasn’t enough, he’s also the lead singer of two popular bands – The Rock Rebels and Vinnie And The Viscounts – and has released at least nine solo albums ranging from hard rock to comic opera! Whew! Just saying that makes me feel exhausted – or maybe it’s the absinthe – I must look into this further…

The idea of twins of opposite alignment has been around for a very long time, from Apollo and Artemis, or Thor and Loki, to Dennis Quaid and Randy Quaid, but I sincerely believe House Of The Living Dead was the main inspiration behind The Simpsons‘ Treehouse Of House Of Horror story featuring Bart’s deformed twin brother Hugo. But it’s not just the movies, in fact almost everyone on Earth has an evil twin who acts like a jerk (except for me. I’m Geoff Petersen‘s evil twin). If you don’t have one, I’m available for a minimal fee. Weddings, parties, anything, I’ll drink the bar dry and be the obnoxious loudmouth you’ve always wanted to be. Speaking of obnoxious, get lost! Until next week when I return to bend your ear, your mind and my elbow with another freak of nature from the wrong side of tracks for…Horror News! Toodles! 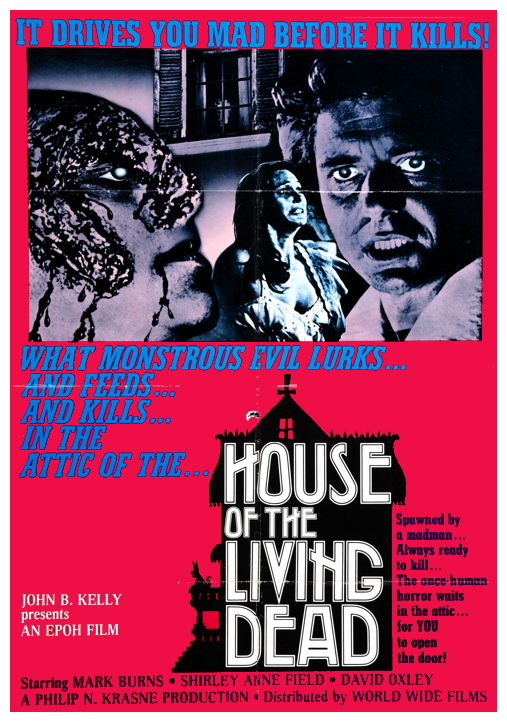