Repeaters: repetition is a nightmare! 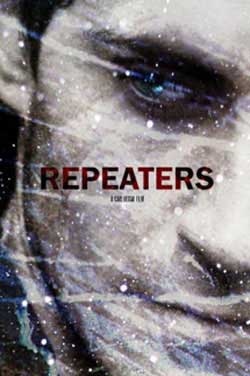 REPEATERS is an aggressive, fast-paced with an important moral question: what would you do if you knew that everyday you started over with a clean slate? Sonia, Kyle and Weeks are three cynical outsiders fed up with the peer groups and the perceived injustices inflicted upon their early adult lives. Forced into mandatory rehab, the trio is given a day pass to attempt to complete step nine on the path to recovery – make direct amends with those they have wronged in the past. Check out trailer
below and enjoy!

The following morning, they begin to notice a strange, eerie repetitiveness to their day. The day’s events play out exactly like their memory of the previous day: people are carrying on the same conversations, and on the television, the morning news repeats the previous day’s broadcast. When the trio reconvene to discuss what happened to them the night before they realize that a shared experience is what is causing the day to repeat. They awake the next morning to find that their fear of reliving a same day over again is confirmed.

Upon acceptance of their predicament, the three begin to behave with more confidence and bravado because surely their misdeeds will be erased if the day continues to repeat itself. Accordingly, they set out pulling pranks and committing petty revenges, but things soon escalate, culminating in the torture and kidnapping of a rival.