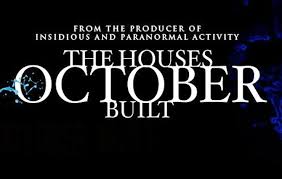 Currently available on VOD, and soon to be seen on selected screens across the country, Writer/Director Bobby Roe’s The Houses October Built is a combination slow burn/found footage movie that surprised me with its atmosphere & overall sense of impending doom. Roe and co-writer/producer/actor Zack Andrews are on the road, currently promoting their latest film and sat down with me to speak about it.

Horrornews.net: I have a problem with found footage films in general at this point in time. Mainly because it seems like there’s about 5 new ones every week, they’re so easy to make. So admittedly, when I sat down to watch your movie, the same bias took over and I just muttered “Here we go again…” to myself in resignation. But I was really surprised at how much I enjoyed this movie. I’m not scared of clowns at all but the ones in here really skeeved me out just a bit! What was your impetus in making this movie?

Bobby Roe: We have always been fans of haunts and the haunt community in general. Over the years, they’ve just become bigger & bigger and over 30 million people will go to haunts across the country this year! There’s not been a movie to really tackle the subject matter effectively, so we thought we’d weave a story around this idea. Additionally, this is a really passionate fan base and scare actors are nothing if not passionate – they really work their asses off to scare people. So incorporating them to (hopefully) tell a story that really hasn’t been seen before, a movie that kind of sticks to the spirit of Halloween, was really important to us. We just wanted to give the people a little bit of a seasonal ride.

HNN: Were there any issues working with any of the haunts? Were there times that you weren’t allowed to shoot any footage?

Zack Andrews: Surprisingly not! It was really easy and people that weren’t interested in it just didn’t do it. But most of the scare actors thought it was cool and the community really embraced us. A lot of the people who work there come from underprivileged backgrounds and haunts are their place to go to have some inexpensive fun. We just heard a story a few days ago about kids who don’t have a lot of friends in school, but when they come to the haunt they find themselves surrounded by people with the same interests and it really brings them together. We actually found most people to be pretty hospitable to us and they all thought that what we trying to do was really cool, so they all wanted to be a part of it.

HNN: What kind of budget did you guys have to work with?

HNN: I knew you weren’t gonna answer that one! I read that you guys didn’t have any kind of studio backing when you started production on this, so how did you raise the money to make it?

BR: Let’s put it this way, what we did was we thought of a story where we could get the most bang for the little bit of money that we had. Having most of the story take place in all of these various haunts, we were able to get some amazing production design – stuff that looks like it might’ve cost $500,000 – $1,000,000, for basically nothing.

HNN: What kind of prep work did you guys have to do before starting production?

ZA: Basically researching haunts across Texas & Louisiana that we thought were interesting. We didn’t want it to be episodic, from the standpoint of going to five haunted houses where you just walk through and see the same old things in each one of them. We knew we had to find things that would be visually stimulating, whether it was zombie stripping or zombie paintball, to kind of mix up the feel of all the places we were going. And we also had a script where we had all the questions we were going to ask the haunt workers, we didn’t know what we going to say all of the time but we knew what we need them to say. A lot of times there were some leading questions but there were a lot of instances where we got some totally unexpected answers. So we would regroup the next day in the RV where Bobby and I would write/rewrite some scenes to piggy back onto what was said the night before.

HNN: How much footage did you shoot in total before the editing phase of production began? I would imagine you guys shot a lot of stuff that didn’t make it to the final cut of the film.

BR: We did, and although a lot was cut for time, hopefully we’ll be able to put a lot of onto the DVD release. We kept things rolling all the time, just like you would do if you were shooting a documentary. When you’re shooting footage in the midst of 1000 Halloween haunt goers, anything can happen! You don’t really wanna turn the camera off, so you get what you’re supposed to get and then you leave the camera rolling to see what happens next. We easily have over 100 hours of footage, some of it just runs its course and some of it will have that gem, back in the dark, that just came out of nowhere. Just sifting through a lot of that footage was an ordeal, but I’m hoping that we can include a lot of the gems in the DVD/Bluray release.

ZA: I think it’s a scripted POV style documentary. The words found footage have that stigma – you even said that when you heard them, you were turned off. So I call it a documentary that’s told POV style. We never wanted the movie to be one where someone found the tapes, that kind of style. We wanted a style that we felt would serve the story best, so I like the way you just said that, that was a good description. 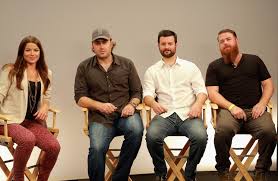 BR: It’s just a good Halloween movie! It’s something you’re supposed to enjoy for a few months out of the year, much like a Christmas movie. There really aren’t too many Halloween movies out this year, so we hope people will give us a chance and allow us to entertain them for a little while during Halloween season.

HNN: How long did it take to get to the finished product from start to finish?

ZA: About five years. From conceptually trying to figure out just what it was we wanted to do to going out and shooting the first round of footage. About five years plus two or three months.

HNN: That’s dedication! Where there moments when you thought it wasn’t gonna get finished?

ZA: It was definitely a roller coaster at times, but we never really lost our faith. We kept pushing forward and when we had a step back we just thought about how we would pull ourselves up out of the mud. We just figured out ways we could keep the ball rolling.

BR: It was never our intention to do something that seems to have been done a thousand times over already by the time we finished it, that was the only real problem for me. The deluge of found footage movies didn’t exist when we started making this, and now it seems like we’re just jumping on the bandwagon – but we really aren’t. At the time we began working on this, I thought we were a little ahead of the curve, and hopefully we still are in terms of subject matter. That’s the only thing that kind of leaves a bad taste in my mouth.

HNN: There’s a lot of Blair Witch Project (1999) in this movie, and a bit of a movie from the 70’s called Race With The Devil (1975). What were your influences when you thought the project up?

BR: Race With The Devil, is that the RV movie? 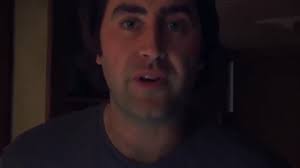 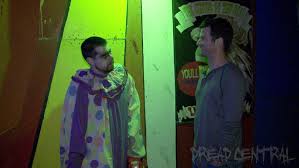 BR: I actually met Peter Fonda at a party not too long ago and we talked about that for a little while! Yeah, there are pieces of that and a bit of Cannibal Holocaust (1980) as well. You see, Blair Witch was fake from frame one – we all knew that everything about is was staged. Cleverly staged for sure, but staged nevertheless. Cannibal Holocaust was fictionalized for sure, but they used real places, real locations, real natives and just that idea of plunging into the heart of darkness and seeing what comes out is what I think we were after. We wanted to focus on realism and while Blair Witch didn’t do that, we all thought that Cannibal Holocaust did.

HNN: Have you guys ever heard of a attraction here in NYC called Blackout?

BR: There’s one in LA as well isn’t there?

HNN: I’m not too sure but it stands to reason that there is. Have you ever been there?

BR: Some people are afraid of clowns. Some people are afraid of spiders. As far as I know, the idea behind Blackout is sensory deprivation, so while you’re experiencing Blackout – those things that you’re really afraid of might actually be in there with you – and that’s really really scary. When you take away someone’s senses, you make them vulnerable. We love the idea of what Blackout represents, but to be honest with you, it’s really just a smart, cheap version of a haunted house where they pull in a lot of money and they don’t have to shell out for expensive animatronics. Some haunts spend upwards of $100,000 on one good animatronic! So using the concept of Blackout is a simple, primal way of scaring people, and that’s something we really enjoy.

HNN: I was curious because I have a couple of friends that have gone through it and it seems so extreme to me. Plastic bags put over your head, water being poured over you, being fondled by strangers…

ZA: We went to one of the most extreme haunts we’ve ever experienced a couple of nights ago, called The New Mexico Slaughterhouse. They’re in line with that as well.

HNN: Personally, I don’t see how anyone can derive pleasure from something like that. Why do you think people subject themselves to such experiences?

ZA: I think it’s a question of finding out how far you can be pushed. We actually did some research and found out that the brain releases the same chemicals when you’re watching a sex scene as when you’re being frightened. There’s something about being vulnerable that just touches people in the right spot, so I think that people just want that chemical to be released. Think about it, why would you willingly want to go someplace that you know is going to frighten the hell out of you? It’s because you want the rush of adrenaline and other chemicals that accompany the extreme fright. It’s not for everybody but for the ones that love that kind of thing…

HNN: Do you guys have a follow up project waiting in the wings?

ZA: It’s been a crazy five years but now our agents are beginning to send us things that are a little further along in development, so we wanna find something that we’re passionate about. It’d be kind of nice to be able to piggy back on someone else’s ides and bring our particular skill sets to it and see what happens.