An elite security team assigned the task of protecting the last known woman who can become pregnant, find themselves caught in an endless claustrophobic underground tunnel system. The team soon learns – the real horror is not the unstoppable force chasing them, but the ever growing smaller tunnel itself.

Who wants to watch a movie where a scantily clad woman crawls around in a tunnel for the entire length of the film? I do! I do! Thus is the case with the recently release sci-fi/horror film CRAWL OR DIE. This is a film I have had to sit on for a bit before writing my review. If I wrote it right after the end credits rolled, I think this would have been an entirely different review. The more I think about it, replaying several moments over in my mind, I’m realizing it had far more to offer than I had originally thought. It isn’t without faults but it’s an interesting picture. It bears a striking resemblance to Ridley Scott’s seminal 1979 film ALIEN but it respectfully nods to it without being a complete rip-off (though some may argue differently). 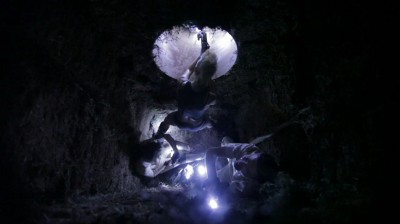 The world has become a bit of a wasteland, decimated by a deadly virus infecting the entire population. Humankind is in danger and there is only one woman left alive in the world with the ability to conceive a child. The government has assembled the best damn team they could possibly find and send them to protect the young girl and are to escort her to Earth 2 (a recently discovered new planet being prepped to maintain humankind and free of the virus).Most of the plan goes off without a hitch, that is until they reach the new planet when they quickly discover another life form exists, one that’s hunting them down. Their only means of escape is to crawl through the tunnel system and find a way out. It’s a race against time, trying to avoid this creature who will stop at nothing when it comes to tearing them apart.

The use of tight spaces and the constant sense of claustrophobia drives the film into memory. We’ve seen pictures before that deliver moments, but never like this and never throughout the course of the film. CRAWL OR DIE has a real professional glean to it and it looks like they really managed to get the most bang for their buck. The cast is solid but it’s Nicole Alonso as our heroine who stands out. She’s beautiful and ballsy, a badass chick with a killer look taking no prisoners. Any film that chooses to use practical effects above CGI is OK in my book. 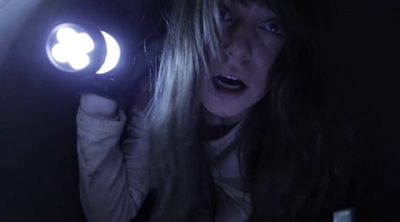 There were a few issues I had with the film, most notably was the lack of any real character development. I never felt a connection to any of the characters nor do you get to know much about them. As brilliant as the idea was, the movie tends to drag at times, maybe another pass in the editing room could have benefited it. Because of all the rapid cuts during the action scenes, it was sometimes difficult to make out exactly what was happening. Moments like those tend to turn me off and it happens in film far too often.

Director Oklahoma Ward is most certainly on the right path. He wasn’t afraid to pursue his vision and he goes for it, full force. Not everything worked but much of it does. He seems to have a pretty good grasp of what he wants and from what I have heard, this is just the beginning. So when it comes time for a sequel, maybe the things I had issue with in this film may be rectified in the new one. There’s also talk of an alternate version of this film, more of a director’s cut, and I’m curious to see how it differs (besides the fact you never see the creature in that version). CRAWL OR DIE is a good film with the potential of becoming something more. If Ward accepts his missteps with this film and builds upon them in the next, the series could end up being something really interesting. *** (out of 5)