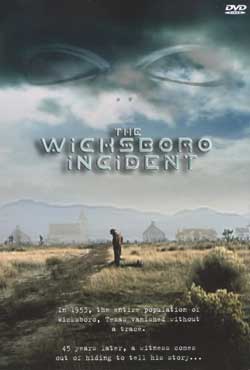 A documentary team and a retired government engineer go to the site of what was once Wicksboro, Texas to investigate a population which completely vanished in the 1950’s. They believe alien invaders were responsible for the mass disappearance, and set out to prove it on film.

THE WICKSBORO INCIDENT opens flashing a few courier-fonted title screens and a close-up interview with a retired electrical engineer named Lloyd. Lloyd explains the research he was performing while residing in Wicksboro, Texas … before he had to go into hiding. He tells the camera that, while experimenting with radar, he discovered a strange, eerie noise accompanying the images of certain people. “There are people living among us who don’t belong,” he says. Not long after this discovery, he claims to have experienced a twenty-second flash of light, unbearable noise, and severe heat (he has the wrist watch burn to prove it). After this unexplainable phenomena he leaves his laboratory to find that the people of the town around him, Wicksboro, Texas, have all vanished. Every single one of them.

He believes now, fifty years later, that alien beings were responsible for the disappearance. They’re an advanced race of invaders, he says, from another solar system … and they’re hostile. Quite hostile.

Fast forward fifty years. He’s joined by a crew of filmmakers who want to go back to what was once Wicksboro, Texas and figure this whole mystery out. What they discover, though, is far more terrifying than any of them had imagined.

“Don’t let him see you with that camera!”

THE BLAIR WITCH PROJECT, anyone? Pretty much. Instead of a local urban legend, though, it’s aliens. I guess this is a direct-to-video cash-in … Running around in the dark, cursing a lot out of pure confusion and terror? I’ve seen all that before.

But a lot of the conspiracy theory rhetoric and logic which dominates the first half of the film is fun. “Male sterility has been on the rise in the last few years!” But it’s all pretty silly, and interspersed with entirely too much stock footage and doctored photographs. The film could have been about a half hour shorter (and it only runs a little over seventy minutes).

The staged interviews are completely ridiculous … most notably those with Robert Patton, the FBI agent who manages the Extraterrestrial Investigations Department–he could be one of them … oh no!!! No!!!

I guess that’s all kind of enjoyable, in an unintentional sort of way.

Also on the enjoyability note–and intentionally, not unintentionally–the actor who plays Lloyd, Bobby Harwell, is fantastic. And, at least in his opening ten-minute “interview,” he’s really credible seeming. Unfortunately, all gestures at realism deteriorate after that.
Don’t believe me? Take a look at the scene where Lloyd and the crew is standing on a street corner with a little microwave scanner calling out which people walking by are disguised as aliens.
Ha!
The second half of THE WICKSBORO PROJECT–I mean–INCIDENT degenerates into senseless inanity. Aliens are real! The government knows! And, boy, are they pissed off! That climax could be fun if it didn’t look like someone gave a drunk person a camcorder and asked them to train for a marathon … and if it didn’t last for close to forty-five minutes!

The ultra-BLAIR WITCH-esque ending will have you rolling your eyes, too.

THE WICKSBORO INCIDENT is, for the most part, a chore to sit through. It’s slow, overlong, totally unbelievable, and ridiculous. Unbelievable and ridiculous would be fine … if its whole point wasn’t to be taken as credible. Avoid this one, unless you love found footage movies, UFO conspiracies, and the unexplained. People be advised: you are better-off tuning into COAST TO COAST AM for this film’s intended experience.
I want to believe.