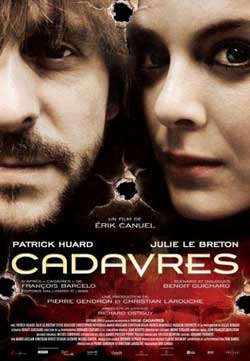 One Halloween, the alcoholic mother of good-for-nothing Raymond suddenly dies, and he throws her body in a ditch. Repenting, he calls his sister Angelie, an actress who he has not seen for ten years, to help find the corpse. But the corpse they bring back in the ruined family home is not that of their mother. The brother and the sister start a sinister adventure involving two gangsters in dire straits, two chilling dealers, a dishonest artist agent, a terribly stupid cop, and a horde of pigs.

Cadavres (or Cadavres: Un Genre de Love Story) is a French-Canadian film from 2009 directed by Eric Canuel (see also: Good Cop, Bad Cop and Le Dernier Tunnel). To try and nail down what genre this movie falls into is a near Sisyphean task; it’s as quirky and comical as it is dark, and as perverse as it is suspenseful. There’s a little bit of crime, a little bit of ghost story, a little bit of dark comedy, and a little bit of drama, all rolled into one crazy package. And it all starts with a guy throwing his dead mother’s body into the gutter… 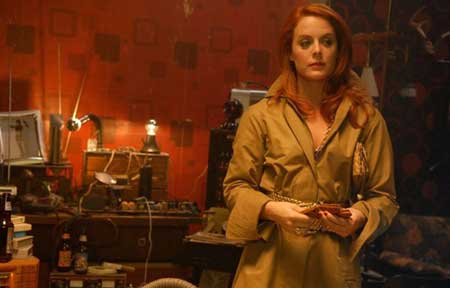 Well, that doesn’t quite explain the whole story. The guy (Ray, out protagonist, played perfectly by Patrick Huard) is driving his mother (played by Sylvie Boucher) home when she suddenly pulls a gun from her purse and threatens suicide. He takes it away from her and holds it on his lap, but she begs him to kill her, putting her mouth around the barrel in a scene that looks a lot like something else and alludes to a certain proclivity that their family may or may not partake in. He decides it’s for the best and pulls the trigger, then dumps her body out the car. Then he runs out of gas and has to call his sister, Angie (also played perfectly by Julie LeBreton).

Furious at her brother, and partially not believing him, Angie demands that they go get the body. So they find it, wrap it up, and bring it home. Problem is, the body is not their mother’s, it is some biker. So they bury him in the basement and decide to go look again in the morning. While Angie showers, Ray sabotages her car. And then things start getting really weird. Like, Singapore Sling weird. And that’s a compliment. 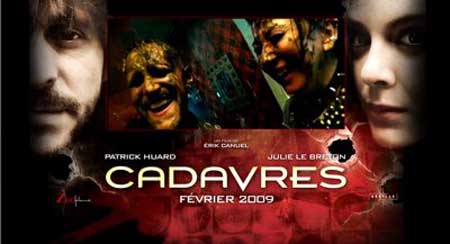 First, there’s the underlying hint at incest, first between the mother and Ray, then between Angie and Ray. There are hints that maybe something had happened in the past. Then there’s Ray’s mom’s room, the walls covered in painting of creepy naked men (her past partners, according to Ray). One of them has a peephole, through which Ray watches his sister and touches himself before being interrupted by his mother’s ghost and a flashback to him spinning on his penis like a top for a girl named Lucette. Oh, it just so happens, too, that Angie is a famous television actress, star of a crime drama called Cadavres, the only show that Ray seems to ever watch.

Cadavres (the movie, not the fictional tv show) is nearly two hours long, but it hardly feels like it thanks to the parade of random visitors to the house, already distracting and interrupting Ray and Angie from the tasks at hand. There are a couple of gutter punks who saw them bring the biker’s body to the house and offer an exchange of the body they found for what is on the body Ray and Angie found. There are the hundreds of small pigs that come along after a truck tips over, and then the cop who comes looking for the pigs but quickly recognizes Angie and pitches his own ideas for tv shows she should star in. There are the crime bosses who come looking for the punks and bring their own rug full of corpse in exchange for info on the punks. Eventually, there is also someone looking for Angie.

The action of Cadavres is crazy and frenetic, but not at all thrown together as substitute for substance and story as it may sound by my brief, spoiler-free descriptions. Throughout all of the quirky scenarios, we watch the relationship between Ray and his sister develop (no, not like that, sicko…well, maybe a little). We learn more about the family through their interactions, as well as through Rays’ interactions with his mother’s ghost. And when everything builds, and we reach the climax of the movie, we find out that all of the surprises haven’t just been sprinkled throughout the movies, but that we are in for a grand finale as well. 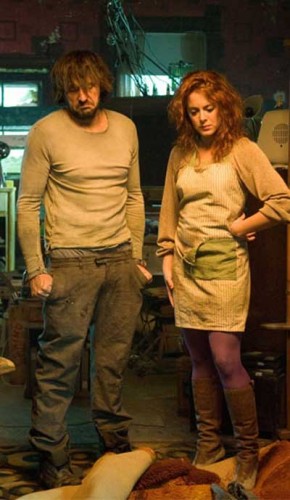 I’d honestly recommend this movie to people across the genre board. It’s as much for fans of Snatch as it is for fans of Amelie, as fun for gore fans as it might be for fans of David Lynch’s films. Whether you prefer art films or movies like Black Sheep (either one, really) or Body Melt, you’ll be able to appreciate Cadavres. The acting is all great, the story is smart and clever and witty, and it looks awesome. It is an amazing dark comedy by a director I was not familiar with previously, but now find myself researching to see if more of his work is just like this. Because if it is, I will be spending some time tracking down more of his movies. Watch this, you won’t be disappointed. 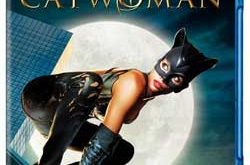 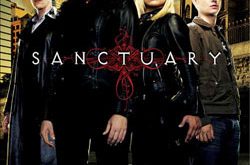