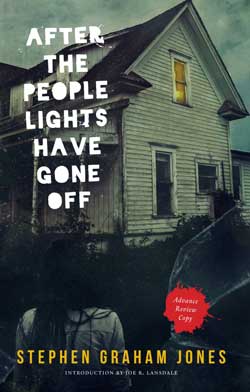 If you’re a fan of horror fiction, and you aren’t familiar with the work of Stephen Graham Jones (which you should be, since I interviewed him here back in April of 2013), now’s the time to get started. He’s got fifteen novels (including Demon Theory, The Last Final Girl, and The Least of My Scars), five story collections (Zombie Sharks with Metal Teeth being one of my favorites, both in content and in title), and over 200 short stories published in various places, from internet publications to magazines to collections. Come the end of September, 2014, his newest collection, After the People Lights Have Gone Off, will be available through the Curbside Splendor imprint, Dark House Press. If you are already a fan of his work, you won’t be disappointed with this new collection; if you’re not familiar, this might just be the perfect introduction to the mind and the writing of Stephen Graham Jones.

After the People Lights Have Gone Off is a collection of sixteen short stories, including two brand new ones, as well as an introduction by Joe Lansdale (author of the Hap and Leonard books as well as the novella, Bubba Ho-Tep). The cover is done by George Cotronis (another familiar name), and each story is also accompanied by artwork by Luke Spooner, signifying what I hope is a tradition in the Dark House Press books (you may remember that each story in The New Black was also accompanied by art, which brings a little extra to the reader’s experience with the book).

Enough about the layout, let’s get to the stories. And man, are there some good ones. All of them, as you may imagine are dark, but the subject matter ranges everywhere from a haunted house to aliens to werewolves to a Stephen King story to the fragile innocence of children. The first story, “Thirteen,” starts with an urban legend about a kid who was killed in the local theater, and how he “reappears,” much like Candyman, if you follow through with a certain ritual. Everyone in town knows the story, but that doesn’t necessarily keep them from tempting tradition. The collection moves from old time city feel to rural setting with the next offering, “Brushdogs.” A father and son go out hunting, and once they split up, the father notices something isn’t right. It has an eerie similarity to the Bogliano film, Here Comes the Devil, with a different but equally creepy twist. Horror stories involving kids almost always are creepy, aren’t they?

In fact, there are quite a few stories dealing with children in this collection. “The Spider Box” shows a guy discovering the peculiar properties of a specifically dimensioned box, and decides years later to see what it might do for his deceased family members. In “Snow Monsters,” a man is faced with a very difficult decision when a stranger appears in his car and gives him bad news relating to his son, then offers a deal. Two lovers at a rest stop have an argument in “This is Love,” and when one goes looking for his partner’s lost wallet, he instead finds a trapped child in the woods and maybe a sort of rift in time.

The other theme that finds its way into Jones’ collection is that of ghosts, hauntings, and the paranormal, and these often appear in unique forms. From the thrift store sweatshirt in “The Black Sleeve of Destiny” that transports objects from here to somewhere else, to “Xebico,” where something as simple as opening night of a play becomes something far more ominous when historical details are discovered (this is one of my favorites in the collection, actually, as it has hints of The Fog and In the Mouth of Madness in it). There’s also “Uncle,” where a man’s deceased wife continues getting packages delivered to her house long after she is gone, packages that contain objects that the husband can’t help but wonder about. But it’s the title story, “After the People Lights Have Gone Off,” that really takes the haunted house genre in a new direction. In it, we see a married couple building a new house, and when they decide to stay the night before it’s finished, there is an accident and the wife is paralyzed. At first, they write it off as coincidence, but as time goes by, the husband starts realizing that they are not alone in there. Some of the creepiest imagery I’ve read in quite a while is contained in these pages.

Really, every story in here is great. “Solve For X” leans toward the torturous side of horror as a woman is carved up and shown math equations that start to mean more as time goes on. “The Dead Are Not” is a creepy one about a man noticing the same strangers at multiple funerals, strangers that don’t seem quite right. “Second Chances” dips its toes into the sci-fi pool a bit as a doctor experiments with a butterfly that soon becomes more than a butterfly. In “The Spindly Man,” a stranger invites himself in to a reading group and forces the participants to look deeper into themselves. “Doc’s Story” is a nice, quaint werewolf story with a warm sense of nostalgia as well as a touch of mystery. And “Welcome to the Reptile House” allows a little bit of humor to flow as we watch a man practice tattooing on dead bodies in a morgue, until it turns out that one of them isn’t.

Stephen Graham Jones, whether in his longer novels or his shortest stories, always manages to find just the right voice to make you feel like you’re in there with the characters, tracing your lycanthrope roots or learning about the calamities of human life from someone who may not be human. He’s not only a master of the language, but he’s a master of setting and tone as well. And most importantly, he knows how to tell a story. Man, does he ever. After the People Lights Have Gone Off is just one of many examples, and I can’t stress enough how good it is without giving away spoiler after spoiler. Just go find your own copy and see for yourself, okay? 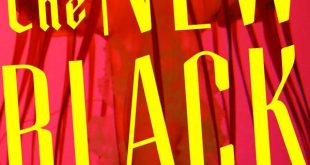 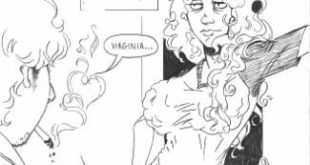 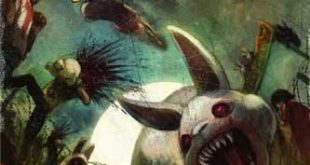