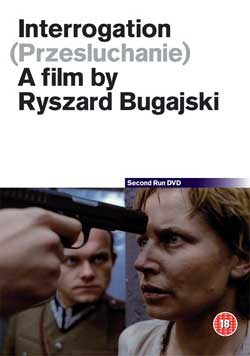 Tonia goes out drinking. She wakes up in prison, not having a clue why she’s there. She is tortured to encourage her to confess to a crime she is not aware of.

Polish director Ryszard Bugajski’s 1989 film, Interrogation (or Przesluchanie), is not so much a horror movie as it is one great big metaphor. It was originally filmed in 1982 (when most of the country was under martial law), but the Stalinist controlled government was so upset with the movie’s anti-Communist messages that it effectively banned it before it was even released. And so, Interrogation did not even see the light of day for seven years, not until Poland pulled away from the Soviet Union’s control in 1989 for the first time since 1945 (and just two years later, the Soviet Union collapsed – and for this history refresher, you are welcome). If this scenario isn’t enough to land Interrogation with a subversive/cult status tag, I don’t know what is. 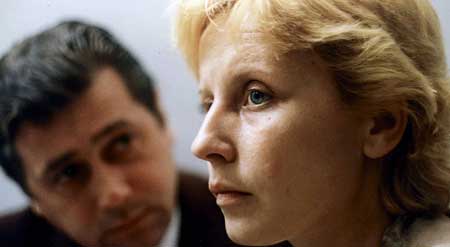 We open innocently enough – at a party for some troops (a banner in the back reads “34th Anniversary of Great October”), a chorus of girls sing songs while people smoke, drink, dance, and party. One girl in particular, Antonina “Tonia” Dziwisz (played by Krystyna Janda), notices a man flirting with a woman in the audience. The problem is, that man is her husband, and when she leaves the stage and heads back to the dressing room, she is very upset. He tries to brush it aside, but she tells him to leave. A couple of male fans come to her and offer to take her out and buy her a drink, which turns into a few drinks, which turns into a blackout. Next thing she knows, Tonia is being searched and thrown into a crowded cell. Why, you may ask? Well, that is just the question she will be asking throughout this movie. 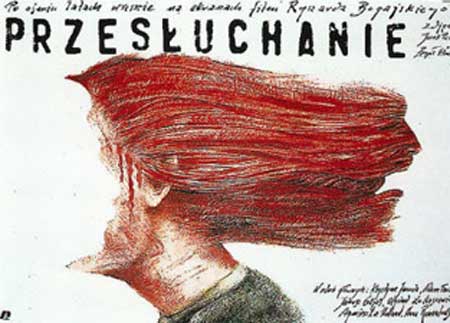 Interrogation is kind of like Oldboy as written by Franz Kafka, but with K replaced by D and without so much sweet, sweet revenge, and with a little touch of women in prison added in (but don’t expect to see a Pam Grier or Dyanne Thorne in here). Tonia is brought before a well-dressed man in an office where she is asked many questions. The questions quickly become personal and sexual in nature, and when Tonia refuses to divulge details of her past loves, the man begins reading off a series of facts about her that she can’t understand how he would know. Eventually, a pre-written (not by her) confession is presented in front of her, and she is asked to sign it. 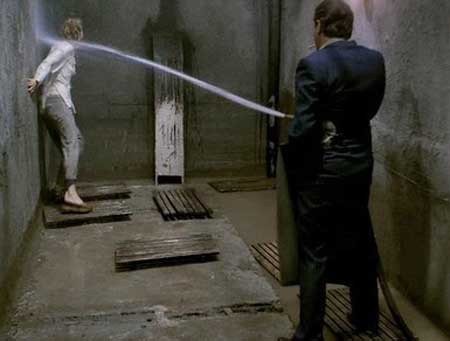 This scenario comprises much of the movie, with punishment for Tonia’s refusal to obey gradually becoming more vicious, more violent, and more personal. She is forced to live in fear in a small cell with multiple other women, all there for similar unknown reasons (one of whom, Witkowska, is played by Agnieska Holland, director of some episodes of The Wire, The Killing, and most recently, part of the Rosemary’s Baby miniseries). Now and then, she is dragged back in to the office to answer questions. When she does not, she is tortured, beaten, and eventually put in “the baths,” where she is chained into a tiny cell and flooded with water. The officials in charge say they know “the truth,” and they even allege that others in Tonia’s cell are ratting her out, in essence plotting all prisoners against each other.

There are no jump scares in Interrogation, no killers in masks, no gore scenes or even titillating moments. But the movie is horrifying in its own right; this isn’t so much fiction as it is a fictionalized account of what has happened in so many different places under so many corrupt governments. It’s slow paced throughout, letting every slap, every tear, every second of lost sanity sink in before moving forward to the nest moment; you get enough time to let really sink in the fact that they may be killing prisoners who refuse to talk before we move on to the exciting, then horrifying, visit to the prison by Tonia’s husband. You slowly learn why, exactly, Tonia is being held, and you have enough time to be horrified over the pettiness of the allegations before the next horror comes along.

Interrogation is not a terribly exciting movie, but it is a very surreal commentary on a time that is more horrifying than some kids stuck in a cabin, or a ghost in the attic. It is well filmed, well acted, well written. I’m not familiar with a lot of Polish movies, but the ones I’ve seen have all had these traits in common, so there must be something good in the water there in whatever the Eastern European equivalent of Hollywood is. If you’re expecting an action packed jailbreak movie, or a fugitive on the run style, you’re looking in the wrong place. But if you want a well shot, thought-provoking tale that still manages to build tension without explosions or knife-wielding night stalkers, might I recommend Interrogation?