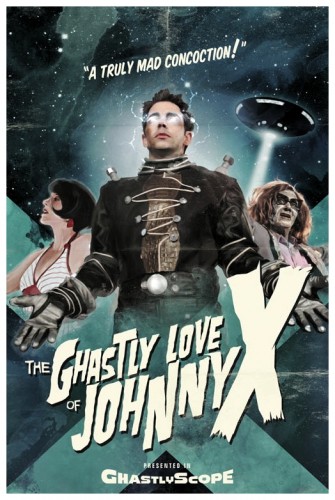 “A truly mad concoction, blending fifties juvenile delinquents, sci-fi melodrama, song-and-dance, and a touch of horror, everything in just the right combination to create an engaging big screen spectacle! This curious and curiously entertaining story involves one Jonathan Xavier and his devoted misfit gang who, incidentally, have been exiled to Earth from the far reaches of outer space. Johnny’s former girlfriend Bliss has left him and stolen his Resurrection Suit, a cosmic, mind-bending uniform that gives the owner power over others. Along the way, there will be several highly stylized musical numbers, lots of genuinely humorous dialogue, and a wacky plot-twist or two, all beautifully captured on the very last of Kodak’s black-and-white Plus-X film stock.” (courtesy IMDB)

This week I discuss a movie that holds the esteemed honour of being the lowest grossing theatrical release of 2012. Could it be John Carter Of Mars (2012), a movie so bad Disney wrote it off as a US$200 million train-wreck? No, that still took US$280 million at the box-office. How about Cloud Atlas (2012) starring Tom Hanks and Halle Berry? That only cost US$100 million and, though it confused mainstream audiences on a global scale, they forked over US$66 million to see it anyway. No. The lowest grossing movie of that year was The Ghastly Love Of Johnny X (2012), a US$2 million monochromatic musical mind-bender, with a total box-office take of US$117. It was actually US$116.15 but the director Paul Bunnell insists it was a full US$117 and he was short-changed. Trust me, in this industry, 85 cents really does matter. 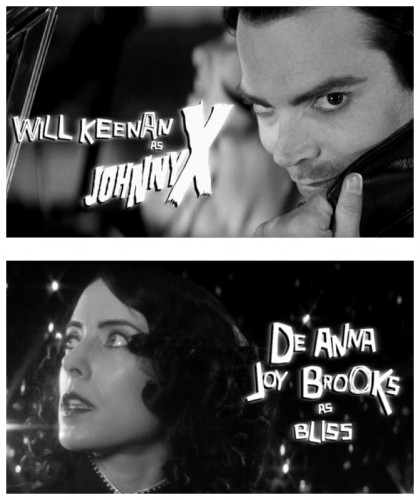 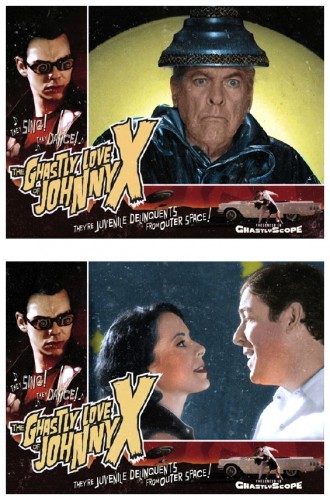 Here’s a filmmaker who had a dream, a vision, and refused to let it die, no matter how much it begged. Instead he nursed it back to health and, although cruelly deformed, it developed into a surprisingly able-bodied movie. Teenagers From Outer Space The Musical…I mean, The Ghastly Love Of Johnny X is a mad concoction of fifties science fiction melodrama, juvenile delinquents, singing, dancing and, if that isn’t edgy enough for you, along comes a rock’n’roll zombie to push it over that edge. It’s about these mischievous teen aliens who come to Earth looking for their hero, the ultimate rebel, and try to appear menacing while singing upbeat ditties. It worked in West Side Story (1961), I can’t imagine why this wasn’t a hit. I could tell you the entire plot but you might think I’d been drinking – and you’d be absolutely spot-on. You’d also think that such a project would only attract a bunch of no-name actors, right? Not so spot-on or, indeed, spot-off, which I think is a cleaning fluid.

Johnny X is played by Will Keenan, who has starred in at least a dozen independent cult movies, like Tromeo And Juliet (1996), Hoofboy (1998), Terror Firmer (1999), The Toxic Avenger IV (2000), The Duke Of Goo (2004), Shooting Vegetarians (2005) and Politics Of Love (2011). In 2004 Keenan starred in a controversial episode of Law And Order SVU as a fictional billionaire not entirely unlike Michael Jackson, who is accused of child molestation, not entirely unlike Michael Jackson. Mickey O’Flynn The Man With The Quim…I mean Grin, is played by former musician and current actor Creed Bratton. His first claim to fame was in the sixties as lead guitarist for a band known as The Grass Roots, which sold more than twenty million albums worldwide. 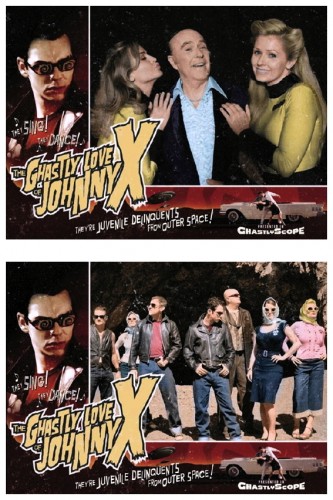 After an argument with the band’s manager, Bratton turned to acting, appearing in such films as Heart Like A Wheel (1983), Mask (1985) and Labour Pains (2009). He’s more famous nowadays for playing a fictional character not entirely unlike himself in the American version of The Office, which is not entirely unlike the British version of The Office. Mickey’s disreputable manager, King Clayton, is played by Reggie Bannister, best known for playing the shotgun-toting ice-cream salesman in the Phantasm (1979) series of films. Phantasm was renamed The Never Dead in Australia in order to avoid confusion with the P*rn film Fantasm (1976) starring John Holmes and Candy Samples…hmmm, Candy…anyway, Bannister has appeared in dozens of horror films and worked with such notables as Bruce Campbell, Andy Griffith and Ossie Davis, but the last time I saw him was in One For The Road (2011), one of two hundred films and TV shows based on the constant background static known as Stephen King. 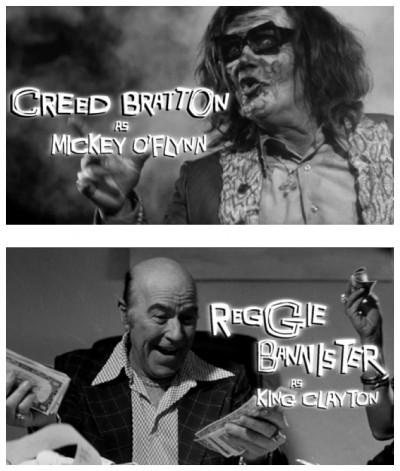 The alien Grand Inquisitor who sends Johnny and his droogs to Earth is played by veteran actor Kevin McCarthy, who is most famous for starring in the seminal pod-people picture Invasion Of The Body Snatchers (1956). After guest-starring in a couple of hundred different television shows, he re-appeared on the big screen in the remake of Invasion Of The Body Snatchers (1978), still trying to warn people of the aliens’ imminent take-over. Along with Dick Miller and Robert Picardo, McCarthy was often cast by director Joe Dante in such films as Piranha (1978), The Howling (1981), Twilight Zone The Movie (1983), Inner Space (1987), Matinee (1993) and Looney Tunes Back In Action (2003). Sadly, Kevin McCarthy passed away in 2010 and never had a chance to witness his own performance in tonight’s film, on advice from his manager. And his doctor. And his lawyer. 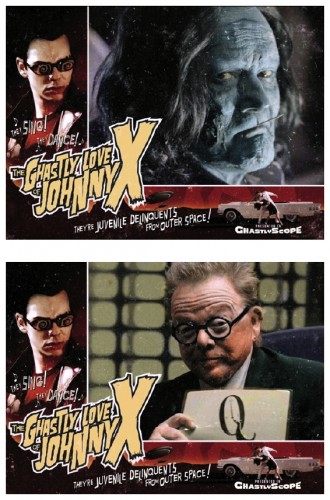 Even the diminutive Paul Williams is back on the big screen! I’m not saying he’s short but, when I first saw him in The Loved One (1965) he was playing a 13-year-old boy – he was 25 years old at the time. Rival songwriter Randy Newman told me he was so jealous of Paul’s popularity he wrote Short People out of musical spite, but the reference went right over his head. Paul attempted to make up for his shortcomings by becoming a successful songwriter for The Carpenters, Barbra Streisand and Kermit The Frog. Paul enjoyed working with The Muppets, probably because he was on their level, appearing on their variety show and composing the theme for their first film, The Rainbow Connection. Blots on his ledger include the theme for The Love Boat, and appearing in Smokey And The Bandit parts one, two and three (1977, 1980, 1983)! It would be remiss of me not to mention his performance as the soulless music mogul Swan in Brian DePalma’s Phantom Of The Paradise (1974), a seventies combination of Faust (1926), A Star Is Born (1937), The Picture Of Dorian Gray (1945) and, of course, Lassie Come Home (1943)…I mean, Phantom Of The Opera (1925). 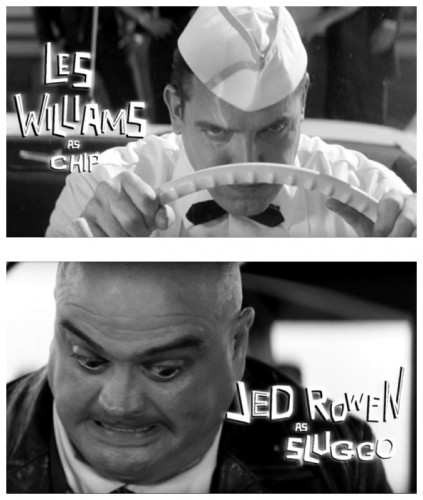 Francisco Bulgarelli‘s cinematography is a real triumph, recreating the bizarre beauty of low-budget fifties films better than any movie since Tim Burton‘s Ed Wood (1994) and there’s a good reason for that. He used discontinued 35mm Plus-X film stock from Kodak, which has since gone the way of the dinosaur, the dodo and Polaroid. Manufactured since 1938, the last rolls of Plus-X were not wasted, and made Johnny X significant enough for the Library Of Congress to buy a copy. I suggest you follow their fine example by purchasing your own copy of the DVD from the official website at www.johnnyxmovie.com – there’s commentaries, deleted scenes, a featurette, and a free plastic case with a full-colour paper sleeve insert! 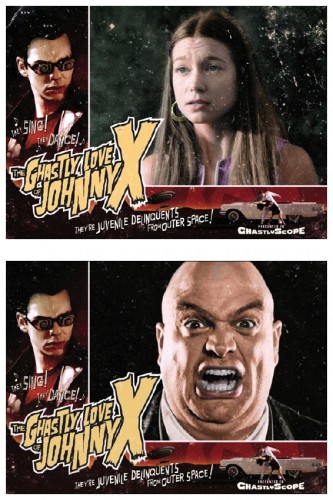 No doubt you’ll agree that a bad movie can be good fun, otherwise you wouldn’t be here, and this is a very bad movie that’s very good fun. Or bad fun, depending on your inclination. I read dozens of positive reviews, which only goes to show that there are far too many people out there being paid to be critics that aren’t critical enough. Johnny X recalls the monochromatic work of David Lynch but, in Lynch’s case, the surrealism is inexplicably unsettling. Here, it’s inexplicably amusing, and we are offered a version of fifties America that seems deliberately littered with anachronisms, like fifties fashions, sixties cars, a seventies rock star who’s a member of the eighties Rock’n’Roll Hall Of Fame, and is photographed by a camera that is clearly from this century. 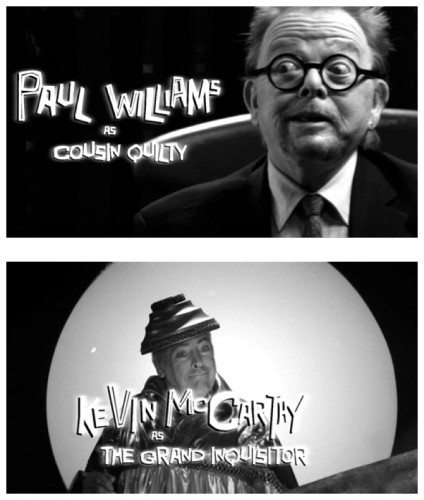 The lowest grossing film of 2012 and the last movie ever shot on Plus-X gives you two good reasons to seek it out. I trust my opinion has provided a third. I would have paid $117 just to see it, but I’m a skeleton on community TV who writes for Horror News, I don’t make that kind of money. I do make a kind of money, in my basement, but none of the shops around here accept Nigel-bucks. That’s another story for another time. I’ll now make my farewells, but it’s terribly important that you join me for next week’s edition, because an old fortune teller told me that if you don’t read all my reviews from now on, the entire world will come to a nasty end. Normally I’m highly skeptical of such claims, but she was just so certain, I feel we’d best not take the risk. So enjoy your week, sleep well, and remember, the survival of the entire world depends on you. Toodles! 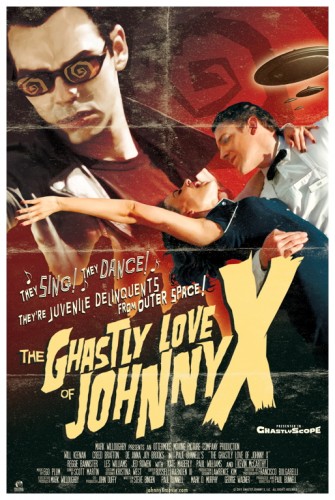