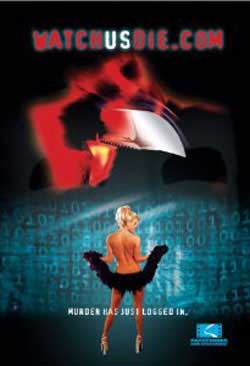 Murder has just logged in. If you saw what you thought was a murder on the Internet, what would you do? Set in a voyeur site called WatchUsDorm.com, viewers are given the chance to watch the everyday lives of eight beautiful women living in the house. These girls are live, 24 hours a day, seven days a week. But soon, a killer is on the loose, and suddenly the name of the site switches to WatchUsDie.com. Who do you call? What do you do?

Erin Cottrell (later starring in Disney’s miniseries of Little House On The Prairie) stars as one of the beautiful women whose lives are broadcast via the world wide web. Out in 2001, this little gem of a horror movie delivers all the goods one expects.

Peter Vita plays Manny Falconer, owner of the website WatchUsDorm.com. At the start of the movie we are introduced to all of the girls and the layout of the house as he invites a camera crew inside to film a segment for their newscast. As each girl appears the screen freezes and a quick bio appears on the screen. This quick set-up allows the movie to get right into the action. And it isn’t long before the first girl “falls” down a flight a stairs. Was her death an accident? No one knows for sure but Manny isn’t complaining. The hits to the website jump and as more and more of the girls fall victim to the killer, the traffic to the site keeps increasing.

Enter Jennifer Cooper who plays Brenna Sterling, a journalist with dreams of writing a book about what it’s like to live 24/7 on the web. She comes to the house as the new girl, secretly trying to get info from the girls about their lives. But it isn’t long before she finds herself part of the nightmare.

To keep the girls safe, the house has a state of the art alarm system and even a lockdown feature that doesn’t allow anyone in or out when activated. As the body count rises and the girls decide to revolt, Manny locks the house down, essentially trapping everyone inside. But who is the killer?

This movie was well done on several levels, including the directing and writing. The women in the film offer great eye candy for the 18-34 male demographic the movie was aimed for, but the director wisely doesn’t overdo it, keeping the nudity to a minimum. Second are the “voyeurs,” or subscribers, to the site. They range from the greasy perv, the businessman, a group of teenagers and even a little old lady who likes to keep track “of her little girls.” What they add to the film are great lines of commentary as they try to figure out if what they are watching is indeed real. Once they realize the killings are real, it’s great to watch their reactions. One even has a great line as he watches the girls react on screen, one that is a standard for all horror movie audiences. “The last thing you want to do is split up, morons!”

I would recommend seeing this movie as it has everything a good b-movie horror should. The filmmakers keep it simple, and that is its greatest strength. It never pretends to be more than it is. They even play a game of naked Clue for crying out loud (similar to the strip Monopoly played in the original Friday the 13th). Given all of the “reality” shows out there nowadays and the comfort level they have attained with the general audience, one has to wonder what would really happen if the events portrayed in this movie actually happened.