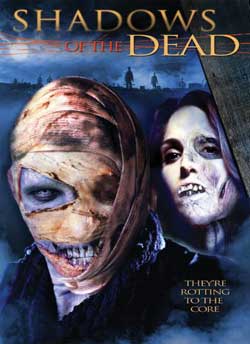 A couple’s weekend getaway turns into a nightmare after they are stranded in the woods and discover what they assume to be a dead body. The assumption is wrong and John and his girlfriend Jennifer are infected with a deadly disease that will soon ravage their bodies. With no place to go, and no one to turn to, they are forced to find shelter in a deserted cabin. This is where they’ll find safety, but this is also where they’ll experience a slow and torturous death. They must come to terms with their inevitable deaths, the temptation to kill others to sustain their own lives, and the consequences of murder. They will cling to one another’s love and support, but in the end…. all great love stories end tragically.

You know a long and tortuous ride lies before you when the film opens up with credits reading “Nobody Cares Productions.”  Shadows of Death creeps—and not in the good way.  It starts painstakingly slowly, progresses slowly, and ends in a rather predictable manner.  Obviously extraordinarily low-budget, this film fails to compensate for its lack of sponsorship in any redeeming way.  The nonsensical situation, lousy dialogue, and barely hearable audio drag it down into the depths of failed horror.  However, though difficult to endure, there exists an undeniable Gothic essence to the film—reminiscent of original Goth man Edgar Allen Poe.  The gradual descent into insanity, the lost love that decays (literally), and tragic ending all play out akin to a Poe classic.

It opens with a seemingly mummified man; he writes in a journal at a desk, his face covered in bandages.  A voice narrates, his voice, beginning the telling of his story, of his eventual demise.  Switch to a scene showing an average-looking couple displaying typical and utterly irritating bickering resonant of long-term couples.  En route to a cabin for a weekend getaway (already setting a precedent for disaster), they incur a flat tire, rendering them stuck in the perpetually foggy woods with no AAA or cell phone service (for reasons unexplained).  Jennifer, Jonathan’s girlfriend, notices what appears to be a corpse suddenly materialize before their car.  She thinks it would be a brilliant idea for Jonathan to investigate said corpse…of course if one were stranded and lost in the thicket of the woods and bodies just started appearing, one would naturally seek to leave the safety of her or his vehicle. 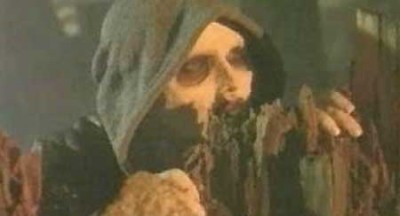 Jonathan, a sucker for Jennifer’s idiotic ideas, caves in to her pleading and investigates not only the lifeless body (which suddenly disappears just as it had manifested), but also the outer woods.  He returns with a haphazardly-done bite mark on his neck.  We never see what bites Jonathan, or how.  Even Jonathan cannot explain to Jennifer what happened—much of the movie operates similarly.

Though the movie never quite explains if they found their cabin or an abandoned one, the couple do find shelter and contemplate either going to a hospital or the police.  In the spirit of the great American debacle, Jonathan fights going to the hospital due to his fear of hospitals and the outrageous charges that accompany them.  They opt out of reporting to the police in fear of police blaming them (although the power of today’s forensics could quickly refute any solid suspicions).  However, when Jonathan fails to feel his pulse or heartbeat, he then reluctantly agrees to visit the doctor.  After the doctor, obviously perturbed by Jonathan’s missing pulse, leaves the room and riles up the staff, Jonathan decides to bolt and return to the cabin where he slowly and literally starts to decompose.  Why they do not attempt to repair their car and return home is an inexplicable mystery.

The plot continues in its nonsensical fashion.  The couple continues to wear the same clothes and stay in the abandoned cabin.  Jennifer wraps Jonathan’s rotting flesh and feeds him from whatever grocery store or unexplained food source nearby.  In a terribly done scene, Jonathan, succumbing to his maddening cravings for human flesh, attacks and bites Jennifer, ultimately infecting her.  Seriously, if Jonathan hadn’t admitted in the narration to biting her, then the audience wouldn’t have known it had happened.  Films can and have been successful with a low budget, but it takes a whole lot more finesse than what Shadows of Death could muster.  Its execution of effects and events result rather pathetically, which doesn’t help its painful slow pace. 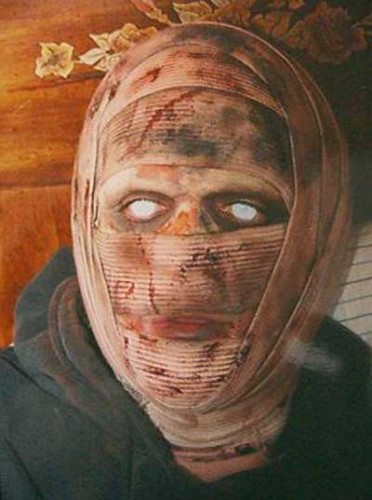 The couple deteriorate together, unfolding like the chronicles of a dying love between two people.  Again, due to its nonexistent budget, we don’t see the physical deterioration, just Jonathan’s bandaged face and now translucent blue eyes that poke through his mummy rags, as well as Jennifer’s poorly-done zombie makeup that never changes.  If you enjoy a good Gothic Poe story, then you may find some smidgen of decency in this film.  Otherwise, the slow pace and countless other issues will madden you like the intensifying insanity growing in Jonathan’s rotten head.