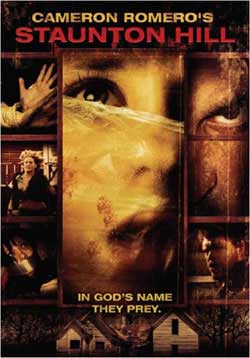 When a group of hikers heads into the mountains of Virginia for some weekend R & R, their pleasant trek goes off the rails when they run into the Stauntons, a deranged family who will do anything to get the interlopers off their land. Now the friends are in a desperate fight for their lives in the isolated back country.

G. Cameron Romero’s Staunton Hill is a new spinoff of the traditional tales of a group of young adult hitchhikers/travelers getting mixed up with the back roads/deranged country folk. The hitchhikers of Staunton Hill find out that being lead off the beaten path leads to their worst nightmare, being lead to a family who has strong religious beliefs and upholds their secret business of slaughtering for body organs to be sold.

Staunton Hill takes off in the season of fall in the late 1960’s. A group of five hitchhikers are traveling down the road, in hopes of getting to the Washington D.C. rallies. Cole(David Rountree) and Jordan(Cristen Coppen) lead the pack, as Boone(Kiko Ellsworth), Raina(Christine Carlo), and Trish(Paula Rhodes) follow. They come upon Burgh’s gas station, and see a male trying to get his truck tended to. The owner of station is very backwoods and ignorant, not liking the sights of a black male (Boone) in the group. Quintin(Charlie Bodin), the owner of the truck, defends the group and offers to give the hitchhikers a ride in his truck. The offer plus some Canadian beer to enjoy is way to enticing towards the group of hitchhikers, and they take off in the truck.

Trish sits in the front with Quintin, and the rest sit in the back enjoying some rest from walking. Unfortunately, this doesn’t last long as Quintin’s truck breaks down once more. Quintin swears to the hitchhikers that there has to be some kind of settlement behind the woods, and the group follows him beyond the trees to a farmhouse. After exploring and nobody seems to answer the doors, the group goes to camp in the barn.

What the hitchhikers don’t know is that there is the Staunton family composed of Momma Geraldine (Sherry Weston), Louise(Kathy Lamkin), and Buddy(B. J. Hendricks) lurking around the seemingly abandoned farmhouse. Momma is wheelchair bound, and Buddy is Louise’s son that is all she has left from the other brother leaving for new business ventures. The Staunton’s pride themselves on religious upbringing, and are a very close knit family unit, being loyal to every order that is given.

The Staunton’s and hitchhikers cross paths, when Cole comes out to talk to Buddy. Buddy is alarmed by Cole, and immediately attacks him with the shovel. Louise comes out, and apologizes to everyone for Buddy’s behavior and invites them to some freshly prepared breakfast. While Buddy is preparing breakfast, Quintin keeps egging Buddy on calling him dumb and stupid. Jordan and Cole try to patch up things with Buddy, and Buddy gives Jordan a baby doll, deeming her a friend. After breakfast, the group splits up trying to decide what to do next.

Trish goes up to the farmhouse, and asks Louise if she may use the bathroom. Louise directs her to bathroom in the little house behind the barn, which is a path to her demise. While Trish explores the little house, she is disgusted by various tools for animal slaughter in a dark, dirty room. She quickly finds out that these tools are not just for animals, as Buddy comes in and systematically slices up Trish into specific pieces needed for the body organ selling process. The rest of the group comes back to the farmhouse and splits up once more.

Boone and Raina, a couple whom has been together for six plus years, walk along the farmhouse lands seeing the pigs. They are hunted down by Louise, and see the carcass of Trish being devoured by pigs. Boone is put through torture, being tied to a chair and having to watch his girlfriend be systematically cut to pieces by Buddy. Cole and Jordan finally find out what is happening, and are caught by Louise. Cole is quickly hunted down, and Jordan makes a run for it. The rest of the film is Jordan’s escape from the Staunton’s farmhouse, and the race to save her life.

Staunton Hill is a horror/thriller that has a story twist that involves Quintin’s involvement with the hitchhikers/Staunton family, which is uncovered towards the ending of the movie. There is plenty of torture related violence involving animal-like slaughter of humans, and painful to watch Boone’s love of his life being killed before his very eyes. The storyline was also very realistic, in that we all have a phobia of what may live within the outskirts of city life, as brought up in classic horror movie tales like Texas Chainsaw Massacre. The only thing that bothered me was the costume choices, being that the movie was supposedly taking place in the 1960’s, but the clothes they were wearing looked very modern 21st century to me.

G. Cameron Romero’s Staunton Hill is a new tale of torture and demise taking place on a farmhouse in the outskirts of civilization. This tale of human suffering is a quick reminder for travelers to stay on the road, and do not ever let a stranger tell you otherwise.