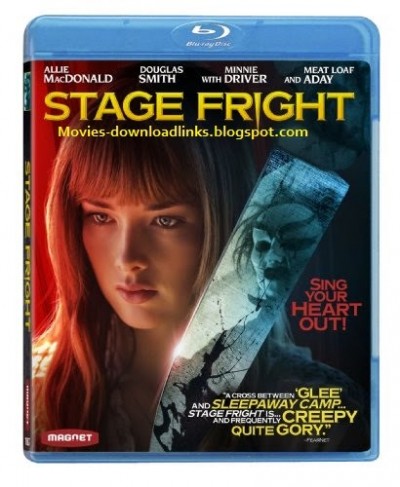 Synopsis: A musical theater troupe is stalked by a deranged killer, all to music!

When I first heard of Jerome Sable’s Stage Fright (2014), my initial reaction was that it was a remake of Michele Soavi’s superb 1987 directorial debut of the same name. After all, the genre has been overrun of late with remakes and reimaginings to keep up with the demands of home video and video-on-demand. More horror product and an insistence on constant one-upmanship between production companies leave little room for risk (i.e. originality) when a tried-and-true theme can be fully exploited to the max. An obvious play on words, Stage Fright is an unusual concoction that attempts, quite willingly though not altogether successfully, to meld the musical and horror genres together in what has been described pretty much by everyone who has written about it as a cross between television’s Glee series and genre favorite Sleepaway Camp (1984). In typical horror tradition, the film begins with the death of a revered figure. Kylie Swanson (Minnie Driver – her last name sounds like “swan song” – get it?!) is an opera diva who is murdered by her illicit lover who dons a rather frightening mask.

Flash forward years later to a young girl, Camilla (Allie MacDonald) and her brother, Buddy (Douglas Smith) slaving over the kitchen of the Center Stage summer camp. Camilla has aspirations to follow in the footsteps of her revered opera singer mother who was killed, whereas Buddy is more realistic and wants them to partner and have their own gig with a restaurant. Former Broadway producer Roger (Meat Loaf, of all people) is the overseer of the summer camp and dreams of making it back to Broadway. Camilla, decidedly not the restaurant type, sneaks into an audition of The Haunting of the Opera (her mother’s last role, believe it or not) to the chagrin of stuck-up peers but to the delight of the lecherous director who tries to get into her pants with the usual promises of fame and fortune. As the cast and crew work to bring Haunting to the stage, the body count begins to slowly mount.

While the song and dance numbers are to be admired from a technical standpoint, the film itself, which runs 90 minutes, feels much longer. For one thing, the songs go on a bit too long, and there is an overall lack of cinematic style that is (ironically) apparent in the types of genre favorites this film is attempting to poke fun at, and even these jokes hit the nail a little too hard on the head. To any seasoned genre fan, the identity of the deranged, masked killer becomes obvious prior to the expected reveal. There is good supporting work from those who round out the cast, and Meat Loaf is always a hoot as the man calling the shots.

The Blu-ray boasts a beautiful aural and visual experience. The extras consist of:

1. a feature-length audio commentary track with writer, director, and co-composer (what doesn’t this man do??), Jerome Sable, and co-composer Eli Batalion. Their banter is humorous and fun and makes you feel like you’re watching the film with friends.
2. A making-of featurette that runs about 9 minutes.
3. A short look at a character when ended up on the cutting room floor, called humorously enough In Memory of a Fallen Camper.
4. Deleted scenes
5. Production design drawings
6. An interview with Jerome Sable and Eli Batalion that runs just under 20 minutes

The Legend of Beaver Dam is an extra that is reportedly on just the Best Buy version of the movie, however it can also be seen here online.