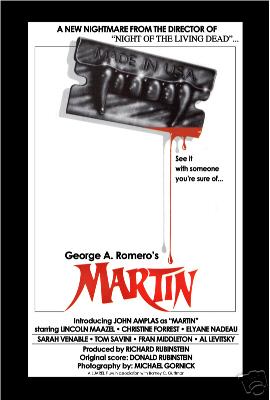 George Romero is best known to horror film fans for his Living Dead films. My personal favorite, and what I consider to be his best film, is Martin (1976), a highly under-rated film shot just prior to what is perhaps his most beloved film, Dawn of the Dead (1978). The title character is portrayed with understated grace by actor John Amplas as a young man whose uncle is convinced that he is a vampire.

The film will be screened at the beautiful Nitehawk Cinema in Brooklyn, NY on Monday, August 4, 2014. Actor John Amplas will be on hand to discuss the film with Fangoria’s Sam Zimmerman and answer questions following the 9:30 pm screening.