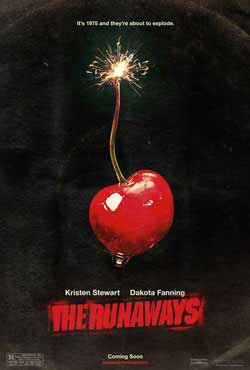 Based on the novel Neon Angel: The Cherie Currie Story, “The Runaways” tells the true story of how five girls who dreamed of being rock stars were put together by a record producer to form what he believed would be a band as big as The Beatles. Unfortunately substance abuse, in fighting, jealousy, and personal problems get in the way and eventually lead to the band’s downfall.

I really enjoyed “The Runaways.” It was well-written, the acting ruled, and it was just a very interesting story. Every once in a while it’s nice to take a break from blood-soaked horror films and watch something else, and I was very happy I got a chance to check out this movie. I’d seen the trailer for it and few months ago and heard a lot of buzz about it, and I am happy to say that it lives up to the hype.

I was so into the movie that it almost seemed over way too soon. It kept me interested from beginning to end and after watching it it made me want to go read Currie’s book. I knew who The Runaways were and was familiar with their music, but before I saw this movie I didn’t really know a whole lot about how they came together and what led to them hooking up. The movie not only does a great job of showing their humble beginnings (as well as their eventual break-up), but also lets the viewer see some of the struggles that they initially faced (mostly due to the fact that they were an all girl band in an industry dominated by men) before they were taken seriously by the general public. I was highly enthralled by their story and I think that a lot of other viewers will be as well.

In my opinion the acting was phenomenal. I wouldn’t be surprised if Dakota Fanning (who plays Cherie Currie) and Kristen Stewart (who masterfully portrays Joan Jett) were both up for Oscars for their roles. Fanning does a great job of playing a shy, quiet, unsure of herself person who transforms into a hard-drinking, drug addicted rock star who never quite overcomes her naivety. Stewart likewise knocks it out of the park with her performance and I honestly don’t think that the filmmakers could have gotten anyone better (other than Joan Jett herself) for the role. Michael Shannnon was equally impressive as the flamboyant and out-there Kim Fowley, and he owned most of the scenes that he was in (plus he’s from Lexington, KY, which is where I lived several years ago). I also thought that it was quite impressive that Stewart and the others learned to play their instruments and actually performed the songs themselves (now that is dedication to a role in my opinion). Supposedly Joan Jett was quite impressed with Stewart’s singing when she heard it, which was something I found to be pretty cool.

I had trouble finding anything negative to say about “The Runaways,” but there was just one tiny detail that bugged me. The film just basically focuses on Cherie Currie and Joan Jett, and the rest of the band members are pretty much ignored. I love Lita Ford (when I was a kid I had a huge poster of her on my bedroom wall and knew that I was going to marry her one day) so it was a bit of a let down that her character only has a few lines during the entire movie. Likewise with the other two members as they were just sort of there and weren’t given hardly any attention. From what little screen time she had Scout Taylor-Compton (who played Lita) does a decent job and I wish we could have seen more of her.

I was blown away by “The Runaways.” I thought that it was an excellent film and is one of the best movies of its kind to come along in quite a while. I think that fans of the band will love it, as well as those people who are not really that familiar with their musical career. If you aren’t quite in the mood for a horror flick and want to watch something else I highly recommend giving this film a try. I really dug it and was highly impressed with it personally. Check it out, but be warned that you will have “Cherry Bomb” stuck in your head for several days after you watch it.