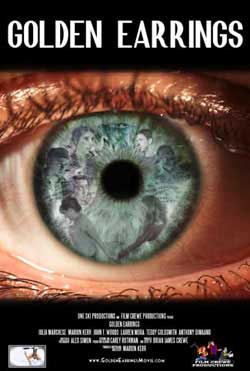 Ronnie and Sara are roommates as well as best friends (though it seems that Ronnie wants to take their relationship to the next level). Sara leaves one night to go see her mother (and sort of boyfriend) for the weekend, leaving Ronnie lonely and depressed. She gets even more depressed after getting a cryptic message from the Ouija board and then when Sara seems to just disappear off the face of the earth. As the police search for her Ronnie becomes convinced that Sara is dead and starts seeing what she believes is her ghost. Is Sara really dead and haunting her best friend or is it all in Ronnie’s head?

I wasn’t real familiar with “Golden Earrings” so I went into it not really knowing what to expect. While it isn’t really a horror film (it is more of a mystery/suspense) I still really liked it and thought that it was an excellent, well-written movie that had a great cast, and interesting premise, and a nice little twist toward the end. It held my attention from beginning to end and I had a blast trying to figure out what had happened to Sara and just what it was Ronnie had done that made her feel so guilty.

In addition to having an original, intriguing plot I just dug the overall vibe of the movie. It doesn’t take itself too seriously and as a result there is some genuinely funny dialogue (I love the whole exchange about the pizza, Ronnie’s response after Jack’s rant about how they shouldn’t play with the Ouija board, and the biggest majority of Fay’s lines). The dialogue is well-written and realistic, and reminded me of a Speed Freak Productions’ film (which is a huge compliment considering that I love Speed Freak). Don’t get me wrong, things get serious and some people die, but I like the fact that there was some light comedy relief as well.

The cast was exceptional and was one of the main reasons that I enjoyed “Golden Earrings” so much. Writer/director Marion Kerr shines as Sara, and I also think that Julia Marchese deserves a nod for her performance as Ronnie (especially toward the end when things really start to fall apart for her and she starts to lose it). I thought that everyone in the movie was incredibly likable and immensely talented to boot. Even though I liked all the characters the one that was without a doubt my favorite was Fay (Lauren Mora). I found Fay to just be a great character who has some of the best lines in the movie. Laruen Mora is very talented and I think that she rocked every scene that she was in (especially the one where she is yelling at Ronnie about being selfish). All in all, this movie boasts a wonderful cast and I see big things in the future for each and every one of them.

The only downside to the movie (and it is a minor one) is that there are some scenes where nothing really happens that go on a little too long. For example, there are several scenes where Ronnie is sitting around watching videos or listening to tapes as she obsesses about Sara that are just too long in my opinion. I think that these scenes could have been cut down a little bit as it would’ve help the movie flow just a little bit better. Then again, as I said I really don’t think that this is a huge problem and it may not even bother anyone else who watches it but I just felt that I needed to mention it. 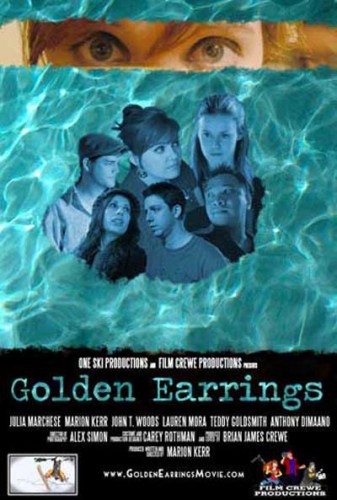 I really enjoyed “Golden Earrings.” I thought that it was original, interesting, and had a great twist at the end that I never saw coming. I think that a lot of viewers will like it as much as I did, so if you get a chance to see it I highly recommend that you check it out. I thought that it pretty much ruled, and I look forward to seeing more movies from these guys soon. 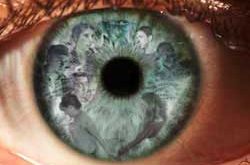