HorrorNews: Tiffany Scandal is a writer, as we know, but what else? What do you want all the readers to learn about you from this interview?

Tiffany Scandal: I’m a good for nothing broad who dabbles with too much creative shit for her own good. Hahaha. I’ve done model and photography work for Suicide Girls since 2007. I also paint, having had some of my more recent work exhibited in a tribute to Twin Peaks art show. From time to time, you can catch me cursing at a sewing machine, but that’s more for personal projects. I also live with three black cats and regularly conjure up dark forces to do my bidding. 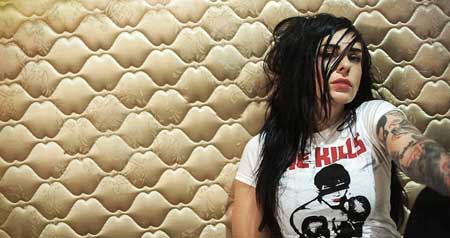 HN: There’s No Happy Ending is your first book, a part of the Eraserhead Press New Bizarro Author Series. Tell us a little about that book, what it’s about, and how it came to be.

TS: There’s No Happy Ending is an apocalyptic story where two lovers are separated on their wedding day, and battle through incredible odds to find one another before the world completely rots away. It’s gruesome, it’s gory, and it’s kind of funny at times.  It was the third manuscript I completed in a four or five month period. My first story (The Hipbreakers, RIP) was an attempt to see if I had the attention span to complete anything longer than a 2k (word) story. The final draft clocked in somewhere around 21K, I was pretty proud of myself.

I went to my first BizarroCon in 2012 and met a f*ck-ton of amazing people. There, Kevin Shamel told me he was interested in working with me to potentially release something through NBAS. After the con, Eraserhead Press held an event called Pitch-A-Palooza. It was crazy. For a whole month, anyone invited to the event could pitch however many times they wanted and await the critiques of peers. There was also an elimination process, so sh*t was real intense. Whatever stories didn’t get cut by the end of the event would be considered by the Eraserhead Press staff for future publication. I think I pitched about seven books, and three were accepted. At that point, Kevin gave me the greenlight to start writing. I wrote a draft for a book with the working title of Rock, Paper, Damnit.

Because we had so much time until the next batch of NBAS books would be sent to the printer, Kevin encouraged me to write out one of my other accepted pitches so that we could select the stronger of the two to print. Thus, the birth of There’s No Happy Ending. I was sitting and drinking with a bunch of the local bizarros and there was talk about how there aren’t enough love stories in Bizarro fiction. Never having attempted to write a love story before, I figured I’d give it a shot. But I couldn’t write happy, fluffy, flowery, barf-in-your-mouth love.

The words that came out were dark, heart-wrenching. I found myself plotting how to further torture my characters, how to make whatever reward lay on the horizon be truly deserved. I apologized to Kevin when I handed over the draft, acknowledged that both stories were on complete opposite ends of the spectrum (RPD was pretty much a weird comedy). He left the choosing in my hands. Knowing how easy it can be to sell comedy (because, seriously, who hates laughing), I opted for a bleak debut, knowing that it would be easier to follow up with something light-hearted. Around the time I was due to turn in a final draft for There’s No Happy Ending, Kevin retired from his editing gig at Eraserhead, and Spike Marlowe stepped in his place. She had read the drafts I had exchanged with Kevin, so she knew what she was in for. I still felt kind of bad when I submitted my final draft and she said that my ending was a total punch to the gut. We bounced a few revisions back and forth, and then we were off to the printer! 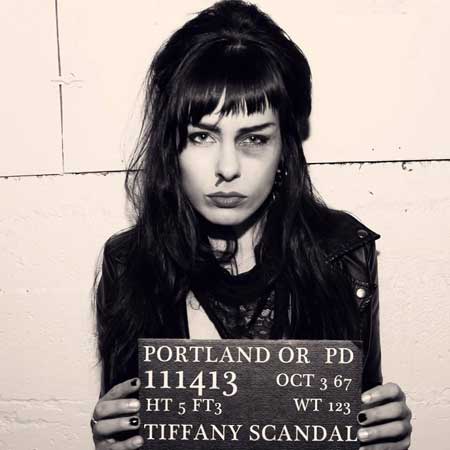 HN: Who are some writers that inspire you, whether peers and friends or historical legends of writing?

HN: The book (There’s No Happy Ending) had an underlying “punk” feel to it, much like Repo Man and Return of the Living Dead (among others) do. That will serve as my lead in to the obligatory question about music and movies: What are some of both that you think everyone should check out in order to become smarter people? Are there any that are especially influential to you as an artist?

TS: F*ck yeah. Thanks for catching that! I grew up obsessing over the Riot Grrrl movement. I loved (and still do) bands like Bikini Kill, L7, Babes In Toyland, Lunachicks. I also listened to a lot of Minor Threat, Subhumans, Black Flag, and Misfits. Currently, I regularly rotate through a lot of Chelsea Wolfe, Sisters of Mercy, Siouxsie and the Banshees, PJ Harvey, A Place To Bury Strangers, Nick Cave and the Bad Seeds, Placebo, True Widow, Explosions in the Sky, and This Will Destroy You. The last two are amongst my favorites to listen to while I’m writing.

As far as movies go, I’m a huge David Lynch fan. From visuals, to weird story lines, I gobble up pretty much everything he does like a sugar starved child in a candy store. I also really love the works of Ingmar Bergman, Alejandro Jodorowsky, Jim Jarmusch. I’m also heavily inspired by films that are ultra violent and gross. So, 70’s revenge flicks, b-rated horror, etc.

HN: Okay, There’s No Happy Ending finds its way into the right hands and gets made into a movie. In your perfect world, who directs it and why? Who stars in it?

TS: Oh, man. Don Coscarelli, for sure. There’s No Happy Ending definitely has some Phantasm, John Dies At The End, and Bubba Ho-Tep elements to it. As far as stars go, I’d be all about Shannyn Sossamon playing Isobel and Zak Smith playing Dresden. Sossamon can have that sweet look, but she could also be that badass punk chick that would totally save someone from being trampled on in a pit. Plus, I would totally pay to see her get stab-crazy on a mutant while wearing a wedding dress. Smith is just a badass. He’s got the look and attitude that fits Dresden.

HN: So, what is next? Is there a new novel in the works? Stories featured in other collections or anthologies? Promote away! Where can we find more Tiffany Scandal work?

TS: Oh, man. I don’t even know where to start! I have three novels outlined. I’m nervous to start any of them because the way NBAS works, it is highly advised that we spend an entire year promoting our first novel, so pitching something new, whether to Eraserhead or elsewhere is kind of a no-no. BUT, I’ll tell you one is in a similar vein to There’s No Happy Ending, one is a super gross/violent horror novel, and one is a crime novel. 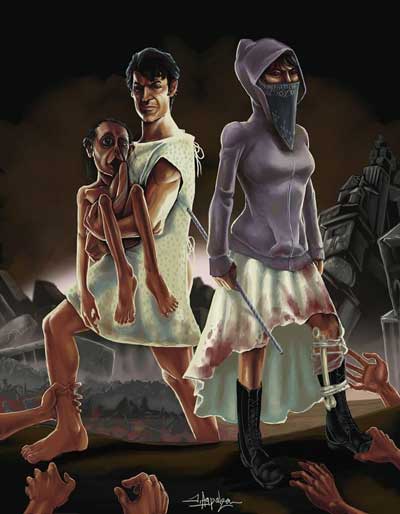 As far as stories accessible in the near future, I have a story in the forthcoming anthologies Strange Sex 2 (StrangeHouse Books) and Wishing Weird (Fireside Press). I’m also working with an editor from PDX Magazine to publish a piece I recently read in public at an event called LitHop (choose your own adventure literary pub crawl). I’m also working on two new chapbooks. One will be included in a box set of collected words by badass women authors, a project spearheaded by Constance Ann Fitzgerald, and will include authors/artists such as CV Hunt, Laura Lee Bahr, Spike Marlowe, Devora Gray, Violet LeVoit, Stacey Rios, Chrissy Horchheimer, and Rae Alexandra. The other chapbook is a collaborative project with my partner in crime, and pretty much everything else, Michael Kazepis. I’m ALSO (yes, god, I know) sorting out details on an internship with Living Dead Magazine. Once it’s all said and done, I should be blogging on a fairly regular basis on their website.

And kind of related, I’m slated to have an interview and photo spread in the next Füchsin Magazine, which should be available sometime in August. Careful with this one though, there might be boobs . . . and not just my own.

To keep up with Tiffany, check out her website at tiffanyscandalsucks.com/.