Home | CRAZY BITCHES Gets Itself A Nice Little Trailer

CRAZY BITCHES Gets Itself A Nice Little Trailer

A trailer for a new horror comedy going by the name CRAZY BITCHES made an appearance today and it actually looks kind of fun. Coming to us from writer/director Jane Clark it’s gearing up for a festival run and what better way to get the fans stirred up than a tight little trailer featuring some hot chicks so, here ya go:

Guinevere Turner, Cathy DeBuono, Candis Cayne and Mary Wells all star in a tale that goes like this:

With its remote setting in the mountains, the Benton Estate is known for being the perfect spot for a relaxing getaway—as long as you don’t mind the possibility that it’s haunted by the souls of murdered teenage girls. When seven former sorority sisters rent the property and invite their best gay, BJ, to join them for a vacation, true-crime fanboy BJ tells them the vacation rental’s history of horror upfront. Undeterred, the women settle in, excited for wine, a little nookie with the locals, and gossip with old gal pals.

And they have a lot to gossip about! New mom Alice is shocked to find out how many of her friends know about her cheating husband. Dorri, the most grounded of the bunch, is hiding a life-changing secret. Taylor, a redheaded virgin, is being chased by the lithe and sporty Cassie, who is being secretly chased by Minnie. And Princess and Belinda are just there to be, well, crazy bitches. When someone starts picking them off one by one, with methods that play on each person’s vanity, accusations start flying and the darkness in the house changes all of them. 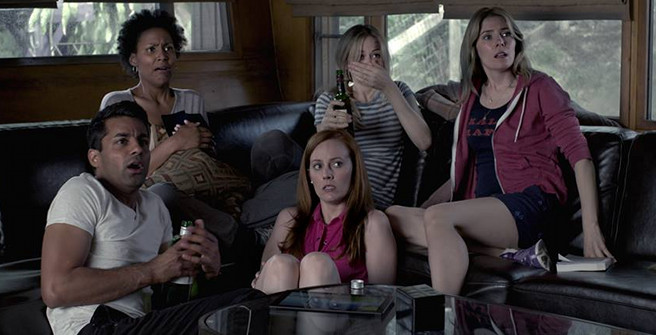