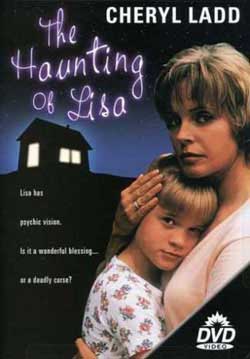 A young and innocent girl named Lisa receives mysterious visions about the murder of a young child. When the visions become increasingly more intense, Lisa’s parents ask for the help of a priest to figure out what is going on. Are Lisa’s visions real? What are they trying to say? Soon, these visions set in motion a search for the killer who may also be responsible for other deaths and who may need to kill Lisa to avoid being caught.

Starring: Cheryl Ladd, Duncan Regehr, Aemelia Robinson, Don Allison, and Kate Lynch
Many films explore the sensitivity to paranormal happenings during a human’s childhood years. One of the most interesting aspects is a child’s ability to communicate with spirits from the other side. It can be both a frightening and enlightening experience, as a child’s ability to see spirits can be written off as an overactive imagination. In Don McBrearty’s “The Haunting of Lisa,” a young girl must work hard to convince adults that the spirit that is trying to communicate with her can help solve a mystery that has plagued a small town for years.

“The Haunting of Lisa” begins with a brief introduction to the main characters Ellen(Cheryl Ladd) and her daughter, Lisa(Aemelia Robinson). Since Lisa had a half day at school, Ellen drops her off as she heads back into work. While playing on the playground equipment, she hears strange noises coming from the tool shed. As curiosity sets in, she explores the tool shed and encounters a spirit of a young woman wearing all white. At this same time, a body of a dead girl is found on the other side of the park. When Ellen ruses to the park, she finds Lisa in the shed in tears begging for help finding a forgotten child.

When Lisa keeps going on and on about what the spirit had said, including what the spirit said about the killer killed the new death and the forgotten child, Chief Mitch Graham(Duncan Regehr) intervenes and offers to take the mother and daughter home. Another officer, Bob Marsden(Wayne Northrop) who is clearly attracted to Ellen, asks to accompany them but Chief Graham refuses letting them be with Bob. After identifying the body, the cops find handcuffs on the victim, which strangely enough have the police department stamp on them. 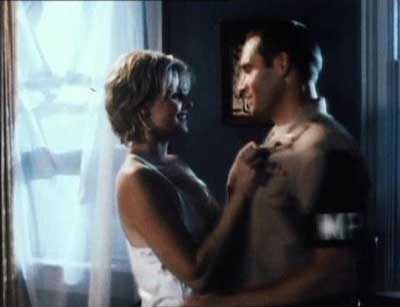 Lisa keeps begging Ellen to check out the tool shed, and when Ellen obliges, she finds a decomposed body underneath the floor. Ellen is shocked that what Lisa had been saying was true, but tries her hardest to protect Lisa by keeping her out of the investigation. When both bodies are that of little girls, a pattern starts to show up, and the handcuffs found on the new death are sent to FBI headquarters to hopefully gain answers on the mystery. Lisa keeps having visions of the girl that died in the past, and tells her mother, in which Ellen gets more concerned with Lisa’s abilities to communicate with the dead. Ellen must battle secrets from her past, along with secrets that are revealed in her present to help solve the mystery of a child murderer within their community.

“The Haunting of Lisa” had many twist and turns that keeps the viewer indulged in the movie, even though it lacked blood and gore that would make it appealing to horror fans. There were moments of disorientation throughout the viewing, with scenes involving the camera spinning around causing dizziness within the viewer. The spirit that communicates with Lisa is a hologram of a lady dressed in white, as she glowed like an angel. Ladd and Robinson did an excellent portrayal of a mother and daughter caught in a murder mystery that has been plaguing the town for ages.

Don McBrearty’s “The Haunting of Lisa” tells the tale of a child with the ability to speak with the dead to help solve a mystery that a police department could not accomplish on its own. I enjoyed the film, as it had me guessing to whom the killer could be, and what the mysterious lady in white had to do with the new and old deceased girls. “The Haunting of Lisa” is a must see for fans of paranormal horror films.

Tags The Haunting of Lisa