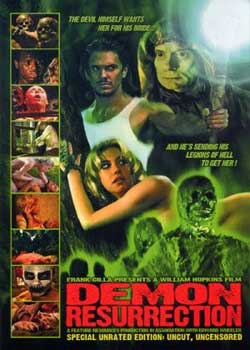 A cult leader summons undead servants to retrieve what is his from a reformed cult member.

What makes a bad horror movie enjoyable? There are so many things, I know. And every lowbrow’s taste is unique. But I find the best bad horror films are unified by their sense of daring. They’re made by people unafraid to “push it,” to go over the top. They’re made by people who recognize they pander to a niche audience—and thus flaunt—embrace their film’s inherent absurdity. This is where mainstream films are afraid to go, and, I think, why a lot of us like watching underground flicks. 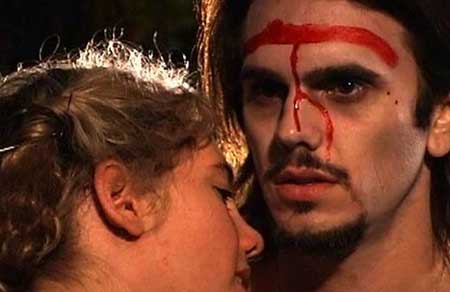 William Hopkins’s DEMON RESURRECTION succeeds in “pushing it,” transcending its budget, titillating—grossing out to admirable degrees. It embraces its absurdity, assuming a dead-serious attitude all the while. It laughs in the face of being considered ridiculous. Even if it’s a hybrid rip-off of EVIL DEAD, NIGHT OF THE LIVING DEAD, and maybe ROSEMARY’S BABY, DEMON RESURRECTION is vastly superior to the average no-budget direct-to-video trash fest.

As the credits roll over shots of skeletons being excavated from an archaeological dig, we’re led to believe our story will follow the girl dusting the sand off them. Not the case—maybe it’s her archaeologist boyfriend who we then meet. Ah, nope. He gets bashed over the head with a shovel by some creepy old man. And it’s not any creepy old man. It’s Toth, a nefarious cult leader. 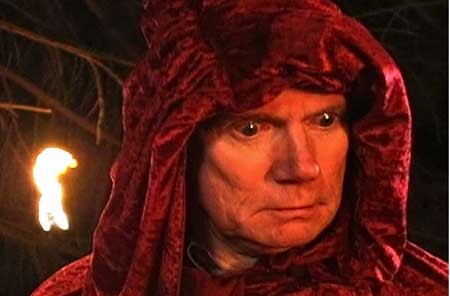 We then find a group of friends about to hold an intervention for their friend, Grace. They fear she is addicted to drugs, as her behavior of late has been anything but normal and healthy. Unbeknownst to any of Grace’s friends she lives with a boyfriend, John, who looks exactly like James Franco. He has some serious lusty memories of her as he sits in a . . . tree. Awkward.

John assures everyone Grace’s problem is not drugs. Well, what is her problem then? It is, in fact, the strange cult she joined. You see, John is an occult expert, and he’d been researching the one headed by Toth (the guy with the shovel) . . . which Grace became attracted to and joined. John, though, told her she had to get out, and, eventually, she obeyed. But she was in there long enough to be impregnated by some demonic force. 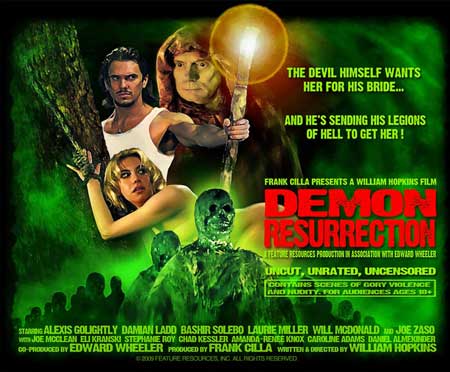 She’s left the cult, but Toth isn’t done with her. He summons those bodies from the archeological dig (the ones from the opening credits) to life . . . and they go on a mission to retrieve Grace. Did I mention they’ll stop at nothing?!

DEMON RESURRECTION takes a little while to get going. It becomes clear from the beginning, you will have some asinine—and poorly delivered—dialogue to endure. Some? Okay, lots, but once it does pick up, you go immediately to trash heaven. It really starts to get good in a fabulously trippy scene where Toth performs a ritual, animating the dead. The colors, man. The colors. Greens and reds all aglow over these corpses—in a nice and drawn out scene that really burns itself into your mind. 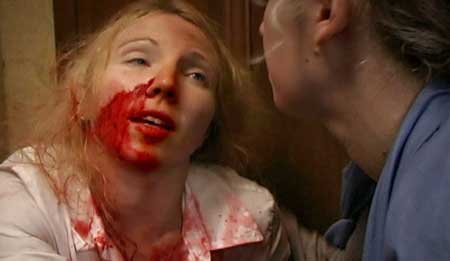 The animated corpses, I must add, are NOT CGI. They are body suits and have a great comic book look to them. Remember the Grantham corpse from the FATHER’S DAY sequence of CREEPSHOW? They look like that. Great monster, huh? Their violent hijinks, I will add, is absolutely disgusting, too. They’re menacing things, so menacing, in fact, that when one of their slimy hands grabs you, you’ll pee yourself! Tear off that hand? They’ll just impale you in the neck with their ulna. And they never resist stopping to snack on a human, pulling out their intestines—FEASTING. Yecch. The baby alien from ALIEN even makes a cameo . . . except it doesn’t burst out of the chest if ya know what I mean. 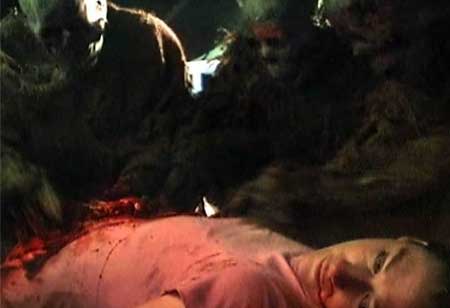 DEMON RESURRECTION proves, sometimes all you need is people being terrorized in cartoonish and inventive ways by the undead. That’s all the movie has to offer. And that’s fine. Just fine. The budget definitely went to the gore on this one, you can tell. But this might be one of the most exciting trashy direct-to-video flicks you see. It wears its love of EVIL DEAD and others on its sleeve. Its acting is bad. Its non-gore effects (like the magick spell “poofs”) are beyond bad. But this is a clunker worth seeing. It has the ingredients of a future cult classic. It could very well be this generation’s DEMON WIND.