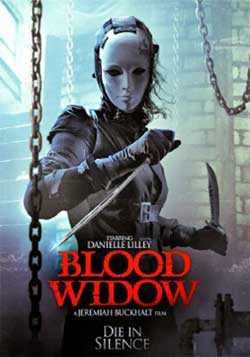 Laurie and Hugh are a successful young couple who have just closed on a weekend home away from the city. Unbeknownst to them, the neighboring property contains the crumbling remains of a boarding school that was shuttered in the wake of an unspeakable massacre. The sole survivor of that massacre still resides in the ruins of the school, hiding from the world and wanting only to be left alone. When Laurie and Hugh’s friends explore the property, they have no idea that they disturbed an emotionally-broken killing machine: The Blood Widow.

Like a mixed bag of tricks and treats, Blood Widow has its pluses and minuses. Its introduction unweaves typically like the dozens of slasher films exposed to American audiences. A curious wanderer’s morbid curiosity propels his untimely and often grotesque demise. With the initiation death completed by the dubiously deviant masked crusader, the film shifts to a scene of pretty and obnoxious millennials gathering for a night of generation Y debauchery. As the film progresses, the crusader picks off each typecast character one by one, until all hope for salvation diminishes.

From beginning to end, the camera angles and overall aesthetic of the film lay somewhere in-between big-budget and camcorder (the kind brought to you by The Blair Witch Project) quality, which interestingly gives it a rawer feeling than the intentionally shaky films of Paranormal Activity and District 9. With the exception of the experimental techno dance beats blasting during the party sequences, silence in the background dominates most of the film, intensifying this rawness. At first, this low-quality camera filming combined with the silence creates the impression of a big anticipated bore. However, as the strange story unfolds, so does the pace and depravity.

As previously mentioned, most of the characters portray typecast or stereotypical roles. On top of this trite variable, the cast overplays their roles which result in a forced execution. Laurie, the main protagonist, immediately defines herself as the uptight girlfriend (strategically clad in a torso revealing shirt with shorts barely covering the bottoms of her butt cheeks), while Hugh reveals himself as the deceitful and inconsiderate immature boyfriend. Then we have whorish and air-headed Amber, obnoxious, empty-headed Marco, socially awkward Kenneth, and over-the-top hippie Harmony (of course that is her name) cover the rest of the bases. Though initially, Laurie’s character starts as irritating, stuffy, and seemingly slutty, she does serve as the most developed and dynamic character (whereas the others, with the exception of Hugh, play static roles). Perhaps this aids Laurie in outliving her comrades.

To add to these cliché features, the group (minus Laurie and Hugh) decides to assemble and investigate the creepy abandoned house next door…as if this brilliant idea ever ended well. Predictably, they conjure unusual ways of disrespecting and trashing the place, basically, asking for a swift disembowelment. It arrives later, when Harmony outdoes the stupidity of all involved by choosing the abandoned house as the perfect location to peacefully trip on acid. Alone. The depth of this moronic action knows no limit. While Harmony trips in front of her Buddha statue in her woven shawl while waving her hands and fingers in front of her and giggling like a maniacal child, the “Blood Widow” silently enters like a twisted ninja in her porcelain and insanely eerie mask. Seriously, if the makers of this film did one task correctly, they choose an excellent mask. Simply staring into its featureless stoicism will give one nightmares.

What happens next, anyone can predict. Harmony, in her acid-induced ecstasy, reaches out to touch the masked sleuth, only to receive an intestinal rip where her insides spill like soggy sausage for her to gawk at. The sleuth then picks up Harmony’s Buddha and ironically smashes Harmony’s head in with it—killed by a universal symbol of peace. At this point, the gore starts its gradual and intense progression to an eventual shockingly horrific summit, disgustingly savory all the while. The makers cruelly feed the audience hope that Laurie will survive. In her gallant bravado, she takes an ax and hysterically screams to the villainess, “Come on you crazy bitch!” But, unfortunately for Laurie, due to a hesitation of action, the Blood Widow bludgeons her to death with the handle of an ax, an uncomfortably long scene featuring close-ups of bloodied Laurie bouncing off the floor like a basketball. Once satiated of her bloodlust, she stops and walks panting out of the basement. Cut to the end credits, and the audiences remain stunned and speechless at the merciless carnage graphically exposed and kept to the very conclusion.

Overall, this movie had great ideas, but its execution lacked. The holes in the plot, overacting, and cliché instances drag it down. However, one of the best aspects of this movie is its originality in depicting the first female masked homicidal maniac killer. This speaks volumes. Her finesse, sadism, and ability to exude creepiness all amount to an effective villain. In one scene, the director emulates the staple “snuff film.” The Blood Widow bonds Laurie up with chains and then erotically peels off her pants with a bloodied knife. She then starts to flog Laurie’s juicy thighs with a barbed whip, and while one watches, one cannot help but sense undertones of lesbian BDSM fetishism—working to the advantage of the movie and accenting its undeniable originality. It bends gender roles, personally, a favorite approach. In summation, The Blood Widow represents the millennial slasher film.