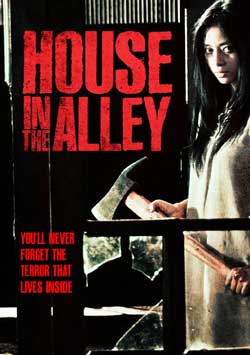 Until they lose their baby to a miscarriage, a young couple were happily settling into their new life in their spacious home. After the tragedy, Thao is inconsolable and won’t let her baby’s body leave the house. Normal life eludes her as terrifying visions undermine her sanity. Her husband, Thanh, experiences strange phenomena around their home and when his wife turns on him, he must race to uncover the secrets of the house in the alley before they lose their sanity and their lives

“House in the Alley” is a Japanese horror film / ghost story that’s about as slow moving as two snails trying to race each other stuck in a slick of molasses. If that’s not bad enough there’s ZERO special effects and I mean NONE. I can sum this movie up in five words: It was a snore fest. 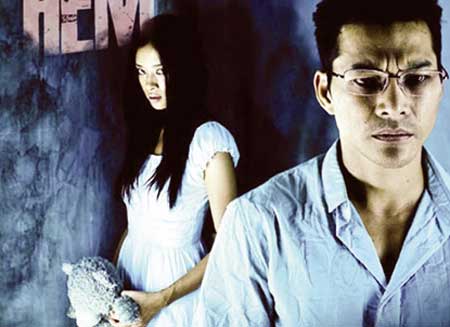 A horror film with dopey red handprints on the walls, no special effects and, well, nothing?? You lost me. This is an open statement to indie / low budget filmmakers – Stop making horror movies that wind up focusing more on human characters and less on the paranormal. If you don’t have the vision or budget than don’t do it. The result of such is stagnant and boring as is “House in the Alley.”

Here’s the crappy plot – Uuggh….I’m falling asleep just writing this…A couple get pregnant, go into labor and unfortunately the baby is dead inside the womb. The baby has to be cut out of her but guess what folks, the couple don’t bury the people like normal folks, they keep it in an eensy, weensy, tiny baby coffin in their bedroom and ya wanna know something else? Wifey isn’t in the mood for sex after this. No shit! 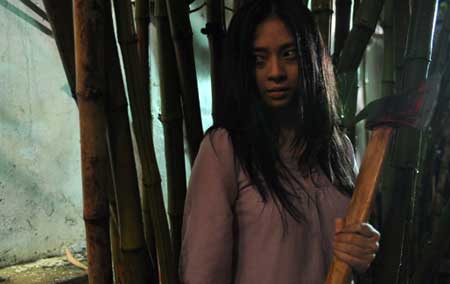 OK, first off, don’t blame her. She had a still birth and second of all her husband is just annoying! What really torqued me was, the husband, Thanh has to call his wife “honey” at least 100 times during the course of the flick, in fact, if you did a drinking game with “House in the Alley” you’d be drunk by the 24 minute mark.

As the plot thickens, if that’s even possible, Thanh, the husband begins hearing weird childlike sounds around the house. Wife Thao just sleeps a lot and basically gets nudged by Thanh when he’s either trying to wake her up or get sex, neither of which is clear. All the while the corpse of their dead, stillborn baby rests in a baby coffin in their bedroom at the foot of their bed on some pedestal. Creepy? Hell yes. Wrong? On every conceivable level. Scary? Nope, well in real life yes but this is a poorly made B-movie. 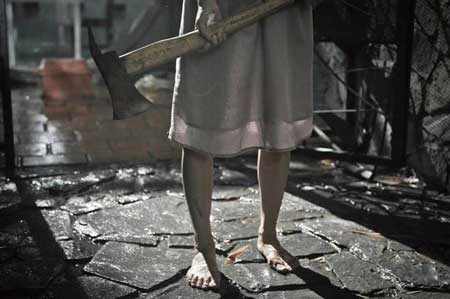 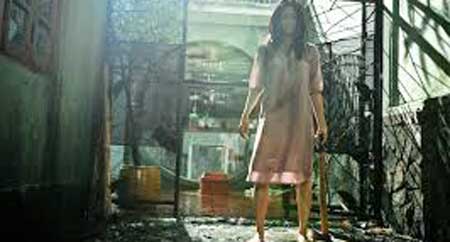 So let’s get complicated. While all this going on Thanh is getting harassed by his mom whom owns the manufacturing plant that he runs. He’s got labor relation problems, a worker’s stike going on, etc. Why we need to know this I can’t figure out. Mom’s a bitch, I get that. This whole other under story should have been left out.

The obvious happens where Thao, the dead baby’s mom goes crazy and attacks Thanh. In her own words, she loves him but hates him. Thanh retaliates and sets the baby coffin on fire. Now there’s more to this movie than this but that’s all I’ll tell you, I won’t ruin the horrid ending to this equally boring, horrid flick. Here’s my pet peeve with indie and B-movies trying to be something they’re not – STOP! Know what you are, embrace, and tell the story. I hate it when this genre tries to pass itself off as something else, you bore me, you waste my time.

Here’s what I want – Give me what I’m tuning for – blood, gore, sex and boobs. I’m happy, you have a great review. When you try and go Sundance film festival when clearly you are not, you lose me and that’s what happened with this film. It was a huge lack of scares, bad storytelling, no special effects and a loss of identity – What are you trying to be here, an indie, a low budget or a legit movie? 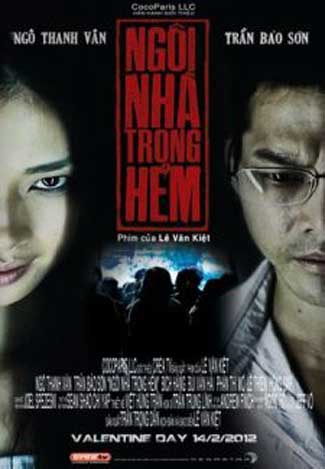 What film makers need to understand is this – hook us in early, keep us on said hook and reel us in at the end. That’s it, so simple and yet I watch movies like “House in the Alley” that just doesn’t get it. The eerie ghostly kid sounds were so far from scary it was unbelievable. And no special FX when it comes to showing the ghosts of the kids, really? The ghost kids were human for Christ’s sake. The special FX budget was null. At one point Thanh chases down the sounds tracing them to the roof of his house but falls to the ground and goes gimp which he milks for the rest of movie. It became a running joke with me to the end.

Can you guess if I’m giving it a good review? If you said NO, you’re correct! There’s nothing creepy or scary about “The House in the Alley.” There’s nothing shocking or otherwise. Avoid this movie at all costs. Do not rent it, do not buy it.