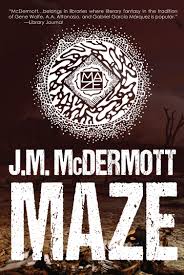 MazeI know only one prayer.

Whatever gods are in this maze, may you suffer as we have suffered. May our prayers leave you ill and dying, as you have left us.

I like bizarre, complicated stories. The kind that warp and wrap themselves into intricate designs of opaque obscurity and leave you scratching your head and rereading the same paragraph thirteen times to be sure what you think happened really did just happen and not the other thing that you suspect may have occurred and holy f*ck what is the deal with that guy who just did the thing he shouldn’t be able to do? When I’m in the right mood, I get a kick out of those and I was certainly in the mood when I picked up Maze.

Maze isn’t so much a single, cohesive story as it is four separate stories of the lives of people who live within the titular structure. Some, like Maia Station and Joseph were born on other worlds and in other times, ripped from their homes into a terrifying and violent new existence. Others, like Wang Xin and Jenny Station were born there. Each story overlaps and interweaves, while revolving around the compromises they must make to survive among rampaging Trolls, Minotaurs, Harpies, Stone Cows, Cavemen and the ravages of nature without being able to take advantage of the conveniences we take for granted. Sacrifices of body, hope, fate and faith will be required of all.

I’ve complained before about the dearth of imagination put into much science fiction and fantasy, but there is no problem with that here. McDermott takes both tropes and myths we think we are familiar with and spins them into new yarn. This world and the creatures that inhabit it feel wholly new and vibrant, in their own brutal way. J.M. then uses our expectations of these myths and tropes as misdirection to get us looking up when he pulls the cloth from beneath our feet. It’s a nice trick and it’s used to marvelous effect in bending minds.

At the same time, everything seems very organic. The society we experience exists and operates the way it does as a direct result of the way the world is constructed. They are people adapting to their surroundings and it fits seamlessly. The world building is outstanding here.

Similarly, the arcs and conflicts of the characters were quite engaging. A woman struggling to survive, alone, in an alien world. A man trying desperately to hunt down and save someone he doomed to this existence by his own sad attempts to end his isolation. Another man pushing to reconcile the world he exists within and the one expects. A young woman struggling between the expectations of society and her own needs. None of these are simple problems, none result in simple solutions and no one get the happily ever after treatment.

However, there were some problems with readability. The writing style is very clunky and uncomfortable, especially when it comes to dialogue. Take this bit of dialogue as an example: “Joseph, I have to tell you this, Joseph, and I want you to not forget this. You have your children and had your great love. I have had none. I am in love with this woman.” It is technically grammatically correct, but hits the tongue all wrong. I get the strong feeling that this was a stylistic choice, and I respect that, but it pulled me out of the narrative and kept me from being able to settle into the story. That could very well be an experience killer for many people. It certainly made the whole less enjoyable for me.

By and large, I was left with a story full of interesting ideas, an intriguing central philosophy and complicated characters facing complicated situations that was nearly destroyed by the way it was told. If you can power through the style choice, there is plenty to love here, but it asks quite a bit in return.

buy it directly from Apex here.