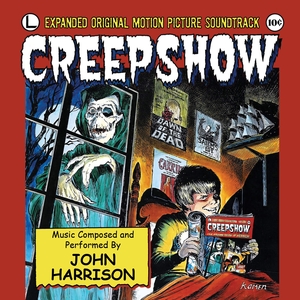 One of my favorite horror film scores is to the first George A. Romero film that I ever saw, his 1982 cotton candy comic book film Creepshow. I always loved the music to this film and it was available for years on both LP and later on CD in a significantly truncated version that played very well as a listening experience but was woefully lacking as a representation of the film’s score since many cues were missing. Plus, we all wanted the “Don’t Let Go” tune that Ed Harris dances to! Well, our prayers have been answered. From the press release:

La-La Land Records and Taurus Entertainment present the restored, remixed and expanded re-issue of composer John Harrison’s (EFFECTS, DAY OF THE DEAD) iconic original score to the 1982 horror classic CREEPSHOW, starring Hal Holbrook, Adrienne Barbeau and Leslie Nielsen, written by Stephen King and directed by George A. Romero. Long out-of-print and one of La-La Land’s earliest, best-selling releases, CREEPSHOW returns in an all-new limited edition supervised by the composer, re-sequenced in film order and remixed from original 24 track elements. One of the most beloved and influential horror scores of 80’s horror, Mr. Harrison’s CREEPSHOW now sounds better than ever! Complimenting this assembly are exciting BONUS TRACKS, showcasing several never-before-released and long-sought-after library cues featured in the film, including the song “Don’t Let Go” from the movie’s “Father’s Day” segment. Produced by John Harrison and Ford A. Thaxton, and mastered by James Nelson, this limited edition of 3000 Units includes new and exclusive, in-depth liner notes from film music writer Jeff Bond, composer John Harrison and director George A. Romero. Delightfully creepy art design from Mark Banning ties all the macabre fun together.