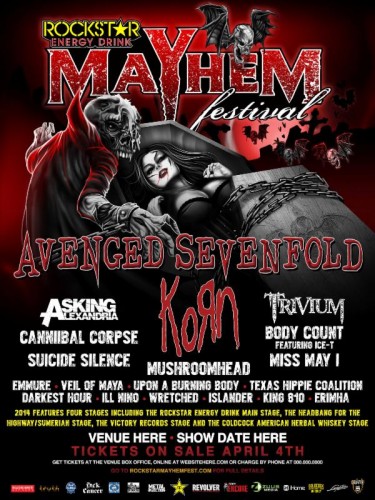 The world’s biggest heavy music touring festival, the ROCKSTAR ENERGY DRINK MAYHEM FESTIVAL in its seventh annual sojourn, is pleased to announce the official 2014 artist line-up with the boldest, largest, loudest and most diverse lineup to date! Not only will this year’s festival include the massive ROCKSTAR ENERGY DRINK MAIN STAGE and COLDCOCK AMERICAN HERBAL WHISKEY STAGE, but will also present two additional stages- the SUMERIAN RECORDS/HEADBANG FOR THE HIGHWAY STAGE, and the VICTORY RECORDS STAGE.

“We are very excited that in the seventh year of the festival we can bring our biggest lineup ever to heavy music fans across North America. With such a diverse lineup of great bands and festival attractions, 2014 will give fans an awesome day of Metal and Mayhem.” – John Reese and Kevin Lyman, Festival Producers

Horrornews.net covering Rockstar Energy Drink Mayhem Fest again this year.   I can’t wait to bring the Heavy Metal to all of our HNN fans.  I’ll be there banging my head! More details around the corner.