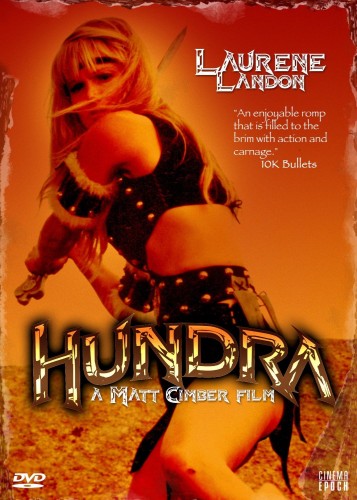 Hundra, the 1983 Matt Cimber-lensed action adventure cult film starring actress Laurene Landon, is  available again on DVD, this time via Cinema Epoch.  You can see the teaser trailer for the film here.

Originally an Italian-Spanish co-production, Hundra has garnered a devoted fan following over the last 30 years.  Dvdtalk.com referred to the film as a “genial, rollicking, comic book sword and sandals fantasy”.  The film was never granted a theatrical release in the United States, which is curious because sword and scorcery films were all the rage during the early 1980’s.  Hundra has been compared to Red Sonja, a film that followed it two years later (there are rumors that Red Sonja is being shopped around for a remake), and even the television series Xena.