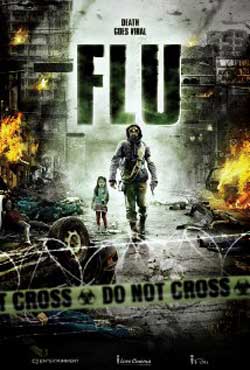 The citizens of Bundang, South Korea struggle to survive when a deadly flu outbreak takes place in their city.

I didn’t know a whole lot about Flu before I saw it and to be honest I really wasn’t expecting much. I just assumed that it was going to be yet another movie about a killer virus running rampant and killing off hordes of people along the same lines as Outbreak or Contagion. To my surprise though I ended up really enjoying it and thought that it was one of the best movies I’ve seen so far this year. It is action-packed, suspenseful, has some great characters, and is just an all around kick ass movie in general. I’ve always been a big fan of South Korean horror films and I can honestly say that this one is probably the best one that I have seen in the last two years or so. As a matter of fact I dug it so much it now has a place of my list of favorite South Korean horror flicks of all time. 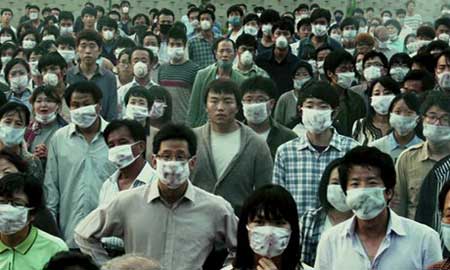 There are many things to like about this movie and I’m not even sure where to start. At the top of my list would have to be the characters, especially Kang Ji-koo (played perfectly by Hyuk Jang) who is the hero of the movie. This guy is pretty much the South Korean version of Peter Parker/Spider-Man as he is a nice, caring, likeable guy who has absolutely no problem with putting himself in danger to save complete strangers (something he does over and over again during the course of the film). I couldn’t help but root for him and his selfless actions, and I think that most viewers will feel the same way. I also loved his love interest Kim In-hae (Soo Ae) and her adorable daughter Mir as well and wanted them to be among the living once the end credits started to roll. Do they survive? You’ll have to watch for yourself to find out. 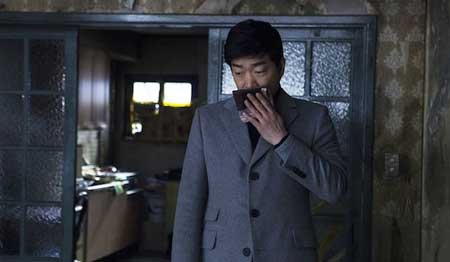 I also liked the fact that the flu wasn’t the only thing that the characters had to worry about. Once the outbreak starts wiping people out the government and CDC step in to get things under control. Of course they end up making a bad situation even worse in the long run and before you know it all of the citizens are herded into what could only be considered a concentration camp so that the infection doesn’t spread outside of Bundang. Things continue to get progressively worse from there as the unfortunate people put under quarantine basically become mistreated prisoners held against their will as the government and CDC scramble to come up with a solution to the problem (and at one point they actually decide that it is better to kill the infected as opposed to treating them). It sort of made me wonder if what happens in the movie would actually take place in real life if such an outbreak occurred and if so I hope I am one of the lucky ones who succumbs to the deadly flu early on since in reality these folks were much more fortunate in the long run as they weren’t forced to endure some of the atrocities that the survivors had to face later on in the movie. 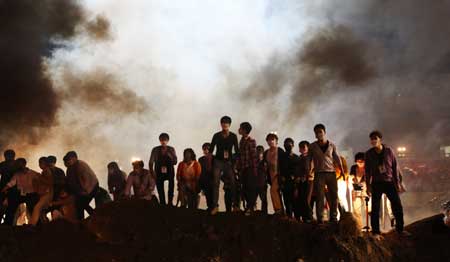 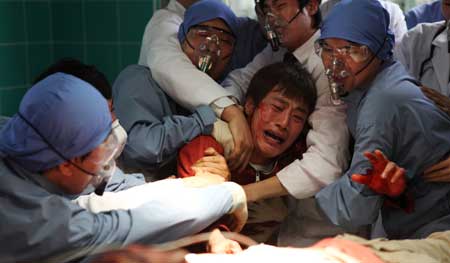 I really dug the weird tone of the movie too. At first it has an almost light-hearted, comedic feel too it (the interactions with Kang Ji-koo and his coworker are priceless) and then things get pretty damn serious pretty damn quick once the flu starts killing people off. From there the tone is dark as hell and there are a lot of very disturbing scenes that take place (the one with the crane dropping all the dead bodies into the fiery pit comes to mind). The last forty-five minutes of the film has a very ominous feel to it and there were a couple of moments where I was sitting on the edge of my seat due to the tense scenes that were that were taking place. If you are in the mood for a fun disaster movie that keeps you on your toes and gets your heart pumping then you’ve come to the right place. 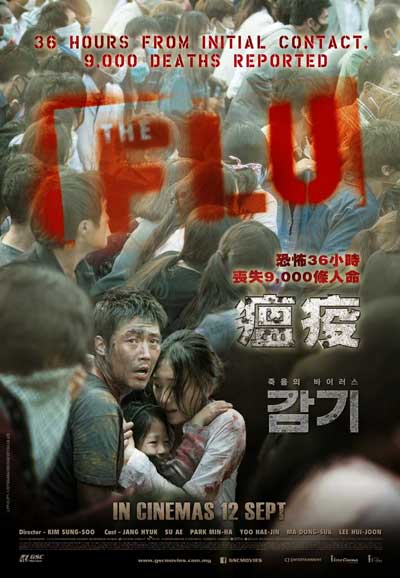 I was pleasantly surprised by Flu and thought that it was awesome. There isn’t a single thing bad thing that I can say about it, and if you know me that is really saying something. This movie is a fun rollercoaster ride full of some pretty intense action, characters that you genuinely care about, and a message to boot, and I loved every minute of it. Check it out as soon as you can as you are guaranteed to have a great time with it. Highly recommended!