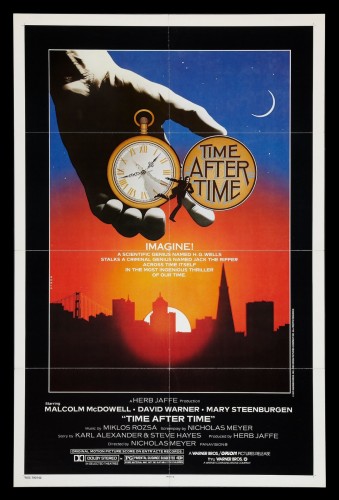 Can it really be 35 years since Nicholas Meyer’s fun-filled Time After Time (1979) was released? I missed the film during its original theatrical exhibition, but caught up with it on cable in the summer of 1983 on a trip to Florida. Based upon the first part of Mr. Meyer’s college friend Karl Alexander’s then-incomplete novel of the same name, Mr. Meyer optioned the book and adapted it into a screenplay.

To celebrate the film’s 35th anniversary, the Landmark Theater in Los Angeles, which is located at 10850 West Pico at Westwood Blvd., will screen the film on Wednesday, March 12, 2014 at 07:00 pm. Actor Malcolm McDowell will also appear in person to answer questions about the film following the screening.

London in 1893 is home to a killer with a macabre nickname… and also to a visionary genius who would write The Time Machine. But what if H.G. Wells’ invention wasn’t fiction? And what if Jack the Ripper escaped capture fleeing his own time to take refuge in ours—with Wells himself in pursuit? From writer/director Nicholas Meyer, Time After Time is a marvelous entertainment of shivery suspense and sly social comment. In modern-day San Francisco, the Ripper (David Warner, Tron, The Omen) finds our violent age to his liking. Wells (Malcolm McDowell, A Clockwork Orange) dislikes the brave new world of fast food and television, far from the utopia he envisioned. But he is cheered by the emancipation of women, particularly one irresistible banker (Mary Steenburgen). For mystery, romance and excitement, Time After Time is time well spent.