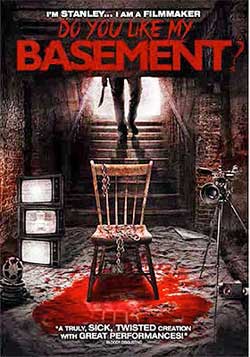 A psychopath named Stanley (who believes that he is a filmmaker) grabs a video camera, subdues a couple and takes over their house, and then proceeds to invite wannabe actors to the house to audition for a movie he is making. What they don’t know is that the movie is a snuff film and they are the stars.

I had never heard of Do You Like My Basement? Before I received my copy to screen and didn’t know a thing about it. After looking at the synopsis on the DVD I thought that it sounded awesome and was certain that it was going to kick all sorts of ass. I mean come on, how can a movie with such a premise going for it not rule? Sadly enough it didn’t. What could have been an excellent film turned out to be nothing more than pretty much the exact same scene over and over again and I was more than a little disappointed all around by the time everything was said and done. Why wasn’t it very good, you may be wondering? I honestly don’t even know where to begin. 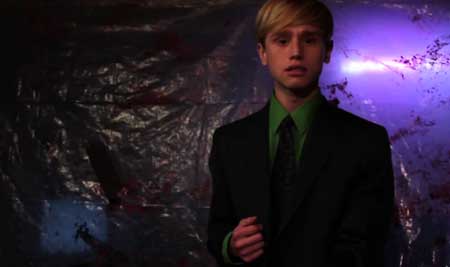 Without a doubt the biggest weakness of the movie is the fact that it was redundant as Hell. The entire thing goes exactly like this: Stanley looks at his computer at people interested in auditioning for the film and we get a brief back story on the person before they meet with him. He asks a series of asinine questions and then he uses a taser on them/knocks them out/ties them up and then films them. Repeat ad nauseam. It gets very old very early on and by the time he had auditioned the second character I’d already had enough and had to fight the urge to skip to the next scene to see if anything interesting was going to happen (which doesn’t). Essentially the same scene takes place repeatedly during the course of the movie (just the characters are different and believe it or not one of them even comes back at one point to do another audition because his first one didn’t go so well so we are subjected to him answering questions again toward the end). Maybe I am just dumb and didn’t get it, but I thought that these scenes were monotonous and more than a little pointless for the most part (plus the majority of them went on entirely too long for my liking). 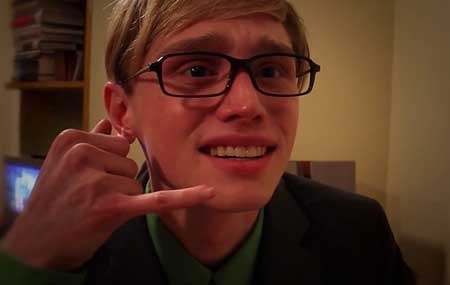 Another issue that I had was the fact that no one really dies until the very end. If you are like me and after reading over the synopsis assumed that this movie was going to be chock full of one gruesome death after the other you would be very wrong. Instead of killing the actors after he interviews them Stanley just keeps them locked up somewhere (in the basement, I suppose?) and doesn’t bother with them anymore until the film’s conclusion (but I will have to admit their deaths-which occur all at once-is pretty cool). Maybe I just misread it but I was under the impression that he was going to audition these people, take them out in a creative and violent way and then move onto his next victim but that isn’t what happens. I mean sure it would royally suck to be held captive by this guy for an undetermined amount of time before he decides to kill you (like one poor bastard who finds himself chained to a bed at one point) but I think it would have been a lot more effective if he just got rid of these people on a permanent basis after interviewing them as opposed to just keeping them around for no obvious reason. 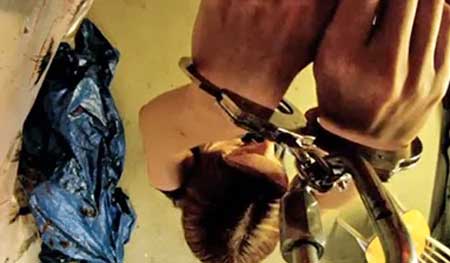 I also had a lot of difficulty liking any of the characters. Most of them are either annoying or just completely stupid in general and I really didn’t care if they lived or died. I don’t know if writer/director Roger Sewhcomar was trying to make a point by showing how stupid people can be when it comes to the possibility of gaining wealth and fame but the characters that appear in this movie are some of the dumbest in the history of film (one girl lets him handcuff her even though she mentioned beforehand that she is a little weirded out by him, a mother lets her teenage daughter go to the basement with him and was actually going to leave for an hour while she is being interviewed, one guy who seems to be uncomfortable with the whole setup to begin with and is allowed to leave ends up coming back, etc).

Stanley got on my nerves more than he scared me (though he does have a cool voice that kind of sounds like Jeremy Irons ) and I thought that the creepiest character in the movie was Chad (there is just something very odd about him that makes him very serial killer-like) even though he is one of the victims! I mean really folks, would you go to a strange house to meet a strange guy all by yourself and then go down in the basement with him even though you already suspected that he wasn’t all there? Yeah, I wouldn’t either. Apparently the characters in this movie have never seen a horror flick (even though one of them claims to be a huge horror fan and claims that she loves Halloween). 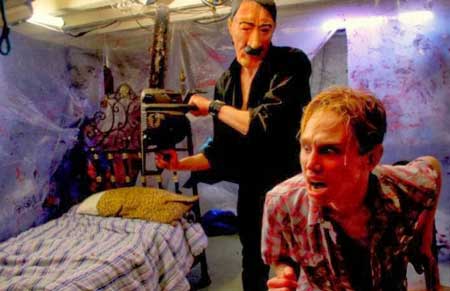 Do You Like My Basement? Could have ruled but it ends up falling flat on its face for a number of reasons (two of those being that most of it is so dark you can’t see what is happening and the fact that the vast majority of it is shot from Stanley’s viewpoint as he is filming people). I wanted to like it because I thought that it sounded like it had potential to really rock but I was more than a little let down by it in the end. It isn’t quite sure what it wants to be as it is a dark comedy one moment and a horror flick the next, but if you ask me it doesn’t succeed at either one. I didn’t have a very good time with this film but other people might, so check it out at your discretion as it may be right up your alley.