Book Review: The Little Boy Inside and Other Stories – Author Glenn Gray 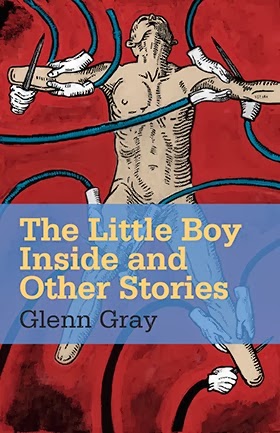 The Little Boy Inside and Other Stories – by Glenn Gray
Concord ePress, 2013

Hello, my name is Sean, and I sometimes suffer from what I have decided to call extreme hypochondria. It’s not a constant, and it’s not something that affects my daily life, but it is there nonetheless. It’s not that I always think I’m sick; on the contrary, I’ve had a cough for what seems like months and I’m not one bit worried about it, and I can’t even remember the last time I went to the doctor. But it’s the weird, little things that get me.

I might wake up in the middle of the night with no covers on and be cold. Do I think I am cold because I have no covers? No, I quickly deduce that I am moments away from dying. Or I’ll feel a slight twinge in my side, which obviously means that one or more of my vital organs is melting. And don’t even talk to me about eyeballs. Do you, too, find yourself suffering from bizarre, irrational horrors involving the unknown aspects of your body? Then Glenn Gray’s The Little Boy Inside and Other Stories is the perfect book for you. It will leave you unsettled and disturbed, in the best way possible.

David James Keaton (author of Fish Bites Cop!) called it “Cronenboiled,” and the seventeen short stories that make up Glenn Gray’s first book fit that description to a tee. A little bit David Cronenberg (think especially along the lines of Rabid and The Brood), a little bit crime, and a lot of horror. And the best part is that these nasty, disturbing stories come from actual medical knowledge; Glenn Gray, when he’s not writing stories about homemade eye drops or mutant-like body-builders who are literally over-flowing with juice, is a practicing physician who specializes in radiology. Makes you wonder how much of this fiction is based in fact.

Gray pokes at the unknown workings going on inside of our bodies early and often and with a very sharp instrument, but he never forgets to bring the humanity along with his absurdity. In the titular story (“The Little Boy Inside”), a single man who just pushed away what might be true love out of paranoia coughs up a tiny little boy.

In “Stuck,” a doctor who is not only in a failing marriage, but also an affair on the side, wakes up to find the toenails of his right foot have grown overnight and have essentially trapped him in bed. In “Expulsion,” a man with nearly unbearable cramps poops out what looks like a mutated tapeworm. He keeps it alive to show a colleague and get an opinion, but while he waits realizes that might not be all that is inside him. “Disintegration” keeps along the same lines, but adds the creepy-crawly factor in as a man staying in a cabin realizes he’s been bit by some kind of unfamiliar bug around the same time that his body starts slowly falling apart. Each one of these stories puts you right there, trying to anticipate what is going on, trying to figure out what you would do in a similar situation.

But don’t think that all of the stories are like that. Oh, no, Dr. Gray has plenty of other horrors in store for us throughout the book. When not horrifying us with what can only be described as on the body horrors, he’s grabbing our attention in some other manner. There are a handful of stories dealing with bodybuilders, the stereotypical meatheads you see at the gym or at the beach because they insist that we all see them and their muscles wherever they go. Gray seems to have a specific loathing for them and all of the unnatural chemicals and concoctions they put into their bodies, and so has designated a special circle of hell to their stories in this collection.

Whether they are exploding with roid rage (“Mr. Universe) or spurting synthetic solutions out of their pores (“Bigorexia”), in these stories they pay for the horrible things they do to each other.

The most intense, and probably most shocking, stories in The Little Boy Inside… are the ones that feel the most real, like they could have been lifted straight out of Gray’s own journal and given a couple tweaks in order to classify them as “fiction.” “Diary of a Scutmonkey” is literally set up like the diary of a recently graduated med student who is just beginning his first internship. Each entry details a day in the life of an intern at a busy hospital, sometimes giving fun stories of advice from veteran doctors, other times delving into the horrors of the sick and the trials and tribulations of the lowly non-resident. Let’s just say, there are equal parts funny and grotesque in these entries. Similarly, but devoid of much of the humor, is “Cannulation,” in which we follow a doctor who is volunteering his services in the Amazon region, not always with the cooperation of the native peoples.

Glenn Gray is a force to be reckoned with. With The Little Boy Inside and Other Stories, he manages to jump across genres with ease, combining crime and horror with his own extensive medical knowledge and experience to create something that doesn’t quite fall into one specific mold, but rather overlaps many at once with each story. Alongside many of the stories are illustrations by Stephen Fredette that visualize some of the horrors you’ll experience as you turn the pages. Unless you don’t like to read, or you’re a sensitive bodybuilder, I can’t imagine you not finding both joy and horror from this book. I’d put it on the must read list of 2013 releases.

Book Review: The Little Boy Inside and Other Stories – Author Glenn Gray