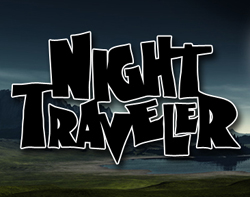 Night Traveler is an adventure series by Lunar Moth Entertainment that has now become an animated film. Originally proposed as a comic book in a single issue, the story took on a different form and became much larger in scope.  The website describes the film as follows:

“Night Traveler: Prophecy of the Elder follows musician Jake Whitman on a journey of discovery and adventure. After being fired from his only steady gig, Jake is lured down a dark dirt road by a ghostly apparition, causing him to wreck his motorcycle. Rescued by an elderly Native American, Jake is introduced to the origin of dreams, where four challenges will stand between destiny and destruction….”