Independent filmmaker P.J. Starks (who directed on co-wrote Hallows Eve: Slaughter on Second Street) presents the third annual Unscripted Indie Film Festival on January 4, 2014. On this date 2 teams will compete to make short films that will then be voted on by audience members on February 22. Horrornews.net’s very own Todd Martin was one of the two winners (with his short script “Lucky”) along with writer/actress Meadow Kristine Farley’s short script. These two films will be the movies that the two teams will bring to life on January 4th. 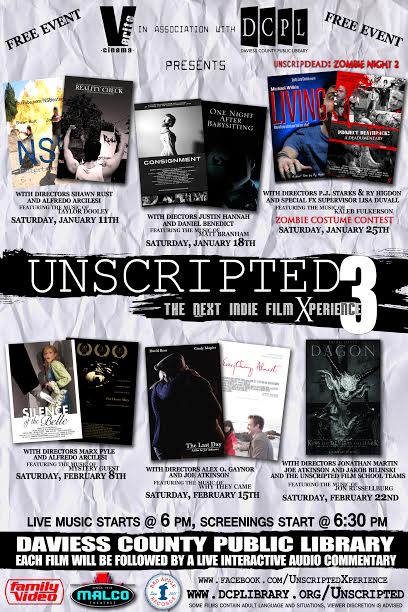 The Unscripted Indie Film Series has a rich and exciting history, and when asked about it Starks shared this information:

“The genesis of Unscripted began from my love of DVD special features, audio commentaries in particular. I wanted to marry that concept with the typical film screening. Bring and audience and the filmmaker together and have the Director discuss all the facets of making his film with them in a live interactive audio commentary experience. I found a home for the series at the Daviess County Public Library and with the help of Jim Blanton and his team, Series One became a big success along with the help of our sponsors Malco Theaters and Family Video. Naturally there needed to be more and we put together a Series 2 and now Series 3 is coming up. It has become so much more than just a film screening. We now have live music and Unscripdead: Zombie Night’s with Zombie Costume Contests.

The grand prize for Best Zombie is a special print of the Scream Factory artwork for their release of Day of the Dead, autographed by the artist Nathan Thomas Milliner (HorrorHound Magazine, Scream Factory!) The series offers all genres, but we’ve got some great horror/sci-fi fare this time around with Project Deathpack: A Deadumentary, One Night After Babysitting, Kiss The Devil in the Dark and For Clearer Skies. I wanted to create a unique indie film going experience and through the generosity and passion of a few I achieved that goal. I couldn’t be more excited to see what the future holds for Unscripted..” 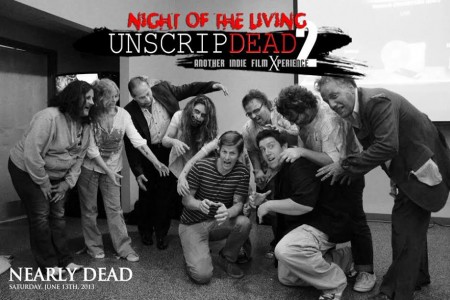 In addition to the film contest the Unscripted Series has also held a zombie costume contest in the past that was featured on a local television channel in March of 2013.
If you are interested in attending the event to watch the two sets of teams create these short films the event is going to be held on January 4th 2014 starting at 6:00 PM Central Time at the Davies County Public Library (one of the requirements of the scripts that were submitted was that they had to take place in a library). Todd Martin will be there that day and it should be an all around awesome time to see filmmakers in action and get to meet a ton of interesting people who have a love for independent film.
If you want more info you can check out www.facebook.com/UnscriptedXperience or www.dcplibrary.org/unscripted.“
Share