Can it really be twenty-nine years since I began reading Tim Lucas’ ruminations on cinema and its representation on home video? While we currently read reviews of DVDs and Blu-ray, we all pretty much take for granted how the reviewer rates both films and their presentation on these respective formats. Those of us like myself who have been following home video since its inception probably remember a very thin magazine publication entitled Video Times which debuted on newsstands in the fall of 1984. Tim Lucas was the author and he not only reviewed the films in question but how they were presented on home video. This was revolutionary and eventually gave way to Video Watchdog, which premiered in digest format in 1990 and is still going strong today. 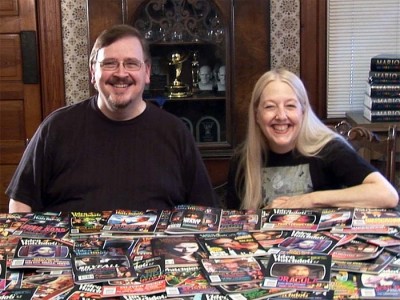 Recognizing that print media (i.e. magazines) seems to becoming an endangered species, video watchdog is now also published in digital format and can be downloaded from its website. The current issue is number 175. In an effort to get all of the previous back issues scanned into this format, Mr. Lucas and his wife Donna have started a Kickstarter campaign to raise capital for this purpose.

Click here to read more about it and contribute your support!