SUSPIRIA Gets the Synapse Films Treatment as it Heads to Bluray 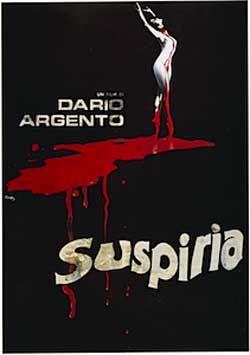 Synapse Films, Inc. has acquired the North American home-video rights to Dario Argento’s 1977 classic horror film SUSPIRIA, with an original soundtrack by European prog-rockers Goblin. Described as “one of the scariest films of all time” by Entertainment Weekly, SUSPIRIA stars the beautiful Jessica Harper (Brian De Palma’s PHANTOM OF THE PARADISE, Woody Allen’s STARDUST MEMORIES) as a young girl caught up in a coven of witches controlling a German dance academy, with a guest appearance by Udo Kier (Lars von Trier’s NYMPH( )MANIAC, Andy Warhol’s FRANKENSTEIN and DRACULA).

“I’ve been involved in the restoration and release of many films in my career, but SUSPIRIA has always eluded me, until now,” says Donald May, Jr., President of Synapse Films. “It’s one of my favorite horror films and I’m ecstatic that my business partner, Jerry Chandler, was able to negotiate with the rights holders to release this film. This is going to be an amazing project
for us.”

Synapse Films, Inc. will work closely with Technicolor Rome and Technicolor Los Angeles to create an all-new high-definition 2K scan from the original negative for a possible 2014-15 video release. “It’s important to spend as much time as possible to create the definitive high-definition home video version for the fans,” May explains. “We’re going to take our time with this one.”

Synapse Films, Inc. is currently planning the extensive work on SUSPIRIA in conjunction with Technicolor, utilizing both their Rome and Hollywood facilities. The film scanning will be coordinated and supervised by Technicolor Hollywood’s Director of Restoration Services, Tom Burton, whose film restoration credits include Ridley Scott’s BLADE RUNNER, Georges Méliès’ A TRIP TO THE MOON, and Blake Edwards’ BREAKFAST AT TIFFANY’S.

Final specifications, retail pricing, and extras for the Synapse Films release of SUSPIRIA will be announced closer to the as yet to be determined release date.