On Tuesday October 29th 2013 I was given the Halloween treat of a lifetime. The amazing Robert Kurtzman was kind enough to invite me over to his studio in Crestline Ohio for one of the coolest events I have ever had the honor to attend.

First, a little back story as this year Robert kicked off what is hopefully going to be a Halloween tradition here in Northeast Ohio, Robert Kurtzman’s Mad FX Lab. Robert actually moved a building, not a trailer, not a garage but a whole damn building onto the lot of his Precinct 13 studio and then turned that building into one the best haunted attractions that this horror fan has ever seen. On this same property is also where Robert runs his Kurtzman Institute of Art where students come from across the US to learn from Kurtzman and his band of world-class FX artists the likes of Al Tuskes and David (House) Greathouse. Yeah, they’re not messing around!

The purpose for my trip over was to chronicle a VIP event that was taking place to benefit the fore mentioned KURTZMAN INSTITUE of ART. The small town of Crestline Ohio is about a 2-hour drive from my home and my wife Shari and I set out in the late afternoon to travel the sparse rolling countryside of Northeastern Ohio to meet a horror icon, actually several horror icons one of those being Robert Kurtzman and the other being the one and only Robert Englund. 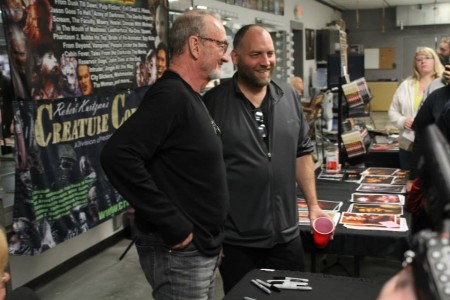 Yes, that’s right Freddy Kruger himself was set to invade small town Ohio and there was no way this horror fan was letting this one get by. Along for the ride was the very talented and long time friend Patrick Desmond who I can always count on to step up to the plate when a quality cameraman/director/interviewer is needed. He brought along Alice Roques from ROCKREVOLT magazine to handle the on camera stuff and what a wonderful natural talent she is. You’ll see for yourself when you watch our interview with Robert here in a minute.

First though, some more about the event as Kurtzman and Co. put on a first class Halloween spectacular that I dare any haunted venue to attempt to top. What made it even more special was the light hearted, friendly, family environment that greeted you from the moment you exited your car. This is small town America and everyone from the Fire Chief to the local supermarket had a hand in making this night what it was. Kurtzman’s studio could double as a museum of horror coolness. Posters, busts, props, masks, original artwork – this stuff is everywhere and Robert opened the entire place up for all in attendance to share in. This alone would have kept me busy for hours but alas there was so much more to be taken in. As attendees stood in line waiting for their chance to talk with Kurtzman and Englund a non-stop assault of oddities roamed the hall, ghastly creations dreamed up by the students at the Kurtzman School. Get a load of this dude. 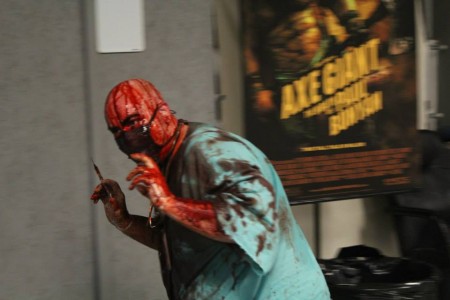 Now check this out, everyone who attended got a free autograph from all the celebrity guests, a free picture with Robert Englund as well as a fully catered meal AND a free trip through the haunted attraction, THE MAD FX LAB. Are you kidding me? Who does that? Usually there are extra charges for any and everything, not here. You had a ticket to get in; you were good to go, damn, what a notion.

Englund was animated, gracious and made every guest in attendance feel like he was there to only meet them, it made for a bit of a wait but I think if you ask anyone who was there if they minded you would be met with a chorus of HELL NO!

As if all that wasn’t enough both Robert Englund and Robert Kurtzman agreed to give us even more of their time and sit down for a little one on one with our own Alice Roques. Tonight I have the Robert Englund chat for you. I’ll have the Kurtzman interview for you in the very near future.

All photos courtesy of PATRICK DESMOND.