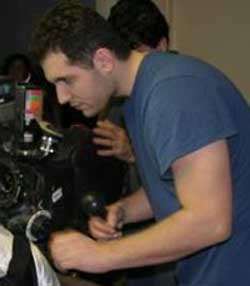 Today exclusively for “HNN” I got to speak with the the genius behind “All Hallows Eve”! He is such an interesting guy to talk to since not only did he direct his film but also did all the special effects and even wrote it. He actually found a way to put all of his short film revolved around a bloodthirsty clown into one brilliant film. After reading this article and watching the film you have to have mad respect for this guy. Ready to get into the Halloween spirit?

What gives you inspiration?

Damien Leone – I think when I watch a really bad film that was made on a huge budget it inspires me to work harder regardless of my limitations.

How much went into this film on your behalf?

Damien Leone – A lot! I was a writer, director, special make-up fx artist, prop builder, etc. The budget was extremely low so we couldn’t afford a big crew but whatever crew I did have wore many hats and did such an exceptional job. We’ve become quite a well oiled machine now.

Where was the film shot?

Damien Leone – The entire film was shot in Staten Island, NY where I live. All of the creepy tunnel scenes were shot at a famous abandoned hospital. It’s a really great location. One I will use for as long as I can. 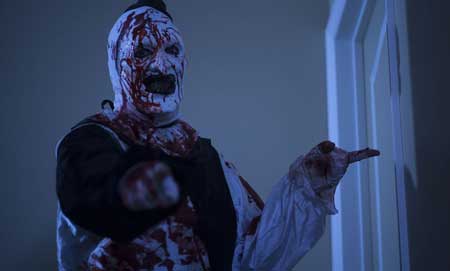 Whats the response you want from your viewers?

Damien Leone -I want them to be creeped out, grossed out and interested. Most of all I want them to be satisfied. There’s nothing worse than forgetting about a film five minutes after you’ve watched it. If at least one scene sticks in the viewers mind after the film is over than I feel I’ve done my job.

Whats next for you?

Damien Leone – A Couple of awesome projects are on the horizon. One is Frankenstein vs. The Mummy. I’m writing, directing and creating fx for that film as well. I can’t talk too much about it yet but it’s going to be really dark and violent.

The other project is another Art the clown film. A script is in the works and it will feature Art as the sole villain this time. 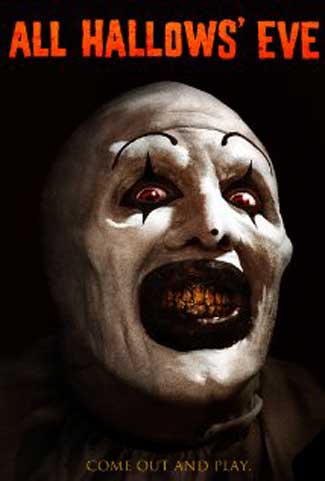 Given the chance, who would you want to team up with on a future film?

Damien Leone -Rick Baker or KNB. If they could do makeup on one of my films it would be the coolest thing ever.

I love “Art” the clown! Whats the story behind him?

Damien Leone – Thanks! I always thought clowns could be really scary but I never saw one done the way I envisioned.

Back in 2006 a few ideas came to mind involving Art. One was a scene of him harassing a woman on a bus which is now the scene in the train station in All Hallows’ Eve and the other idea was of about a young girl seeing the clown exit her parent’s bedroom covered in blood which turned into the last scene in All Hallows’ Eve. That’s usually how my films work, I’ll come up with a scene and build a story around it.

Over the years I’ve developed the character more and more. His look has been refined along with his sense of humor and murder style. Now I think he’s a pretty solid and effective villain.

Without any spoilers do you have a favorite scene?

Damien Leone – Yes, I do. The ending of the final short film in All Hallows’ Eve is my favorite. I think it’s Art the clown at his finest and most sadistic.

Also, I’ve never seen mutilation done to that extent in a horror film before. I’m very proud of that.

When I watched your film I noticed that you used an effect that I think is brilliant! That effect is when you have something terrifying in the far corner of the screen and leave the viewers eyes to kind of find it. It scares the shit out of me two times more than a jump scare! Its kind of like starring at a ghost picture and out of nowhere seeing a face in the window. It will make you jump! It kept me on edge and my girlfriend too scared to sleep. Was that your intention or the way I perceived it?

Damien Leone – Thanks a lot! It’s definitely intentional. That’s a similar technique used frequently in many John Carpenter films and by William Friedkin in The Exorcist. For instance, the scene in The Exorcist where Father Karras walks into Regan’s bedroom and the camera cuts to his dead mother staring at him on the bed. It’s one of the scariest scenes ever and it’s not cheap. Nothing jumps out at you and there’s no loud music. That’s genuine terror.

Damien Leone – I just want to thank you for this excellent interview and I hope you enjoyed All Hallows’ Eve. Art the Clown will be back with a vengeance! 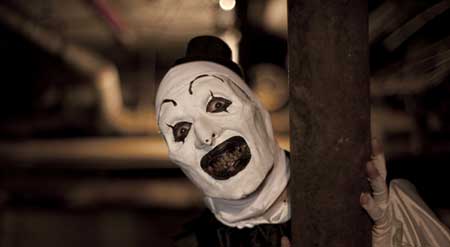 Special thanks to Damien and I watched his film twice already. Its great and really helps keep you in the Halloween mood. Not only was this film scary but a lot of fun as well. I guarantee this is a must see for any horror fan. You read it, lets discuss it! Follow me on twitter @cflhorror to talk about it or leave a comment below! -Thank you!