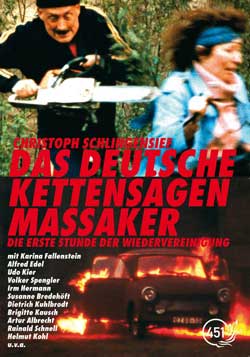 Das Deutsche Kettensagen Massaker — We meet a butcher family. They recognize cheap meat in the East Germans passing over the old border into the West and begin turning them into sausage

There are two ways to look at German director Christoph Schlingensief’s movie Das Deutsche Kettensagen Massaker (The German Chainsaw Massacre, or as it’s called with its American release, Blackest Heart). At one point, it is sharp social commentary on the reunification of Germany and the political and cultural ramifications of the wall coming down. At the same time, it is also an artsy, gory horror movie in the vein of Tobe Hooper’s classic The Texas Chainsaw Massacre. The commentary within the story itself is interesting for sure, speaking as someone who was still young enough to see the fall of the Berlin Wall as something on the news that happened “over there.” Doing a little research, it appears many of Schlingensief’s films are packed full of social commentary on the state of Germany. However, this review will be focusing primarily on The German Chainsaw Massacre as a German horror movie. This is HorrorNews.net, after all. 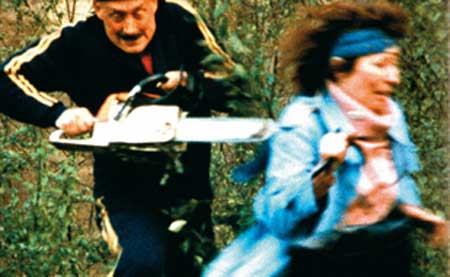 We open at the Reunification ceremonies. People are cheering, bells are ringing, fireworks are firing. A united crowd sings the national anthem. And then we cut to a woman cut in half on the ground, her entrails falling out of her split body, and a car speeding by with a couple inside singing cheerily. Yep, it’s going to be a weird one. After the opening credits roll, a man (played by a woman) comes home from work and calls out to that he is horny. When he goes into the bedroom, he finds a dog torn apart on the bed, then is attacked by Clara (Karina Fallenstein). She slits his throat then drives off. She encounters some bizarre border checkpoint guards, then later stops at a gas station to use the phone, at which point she is offered homemade sausage and we begin seeing the parallels between the Husqvarnas used in Germany and Texas, as well as a touch of The Hills Have Eyes when a guy in a mask peeks through the window and the station attendant stabs at him and scares him away. 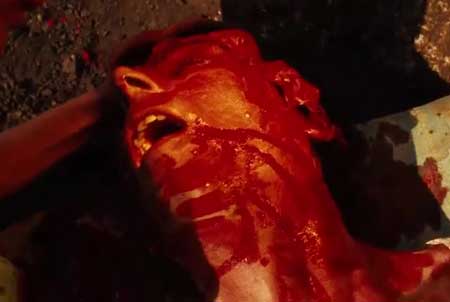 The meat of the story (pardon the pun) focuses on Clara meeting up with Artur, a man she is in love with. They are attacked by a guy wearing a helmet, and Artur is pummeled with a rock. Clara goes off to find help and stumbles upon a rundown hotel/warehouse full of strange people. There is a woman who keeps coming on to her, a couple who insist Clara must register for a room before they can help her in her emergency, and an old man named Alfred who has conversations with a skeleton he calls “father” in which he provides both voices. Psycho, anyone? All of them, who from here on out will be referenced as “The Family,” also run a slaughterhouse which may or may not be full of butchered people and their parts. 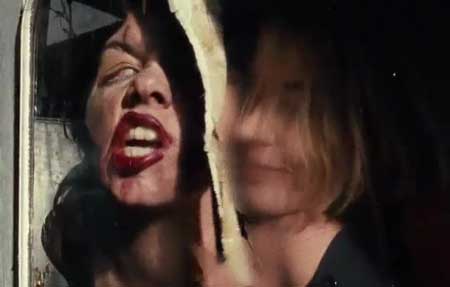 This movie is pretty crazy, usually in a good way. The characters are all over the place and bizarre, making the movie at times feel like an art film, at other times feeling like a twisted nightmare of a horror movie. For example, when a car holding a middle-aged couple is run off the road by The Family, a knife is held to the woman’s throat, and the man has a mask put over his head and then his skull crushed with a pipe, we can’t help but feel the horror. When people in weird masks, zombie make-up, and a Nazi uniform dance around Clara in a smoky room, then she wakes up with a layer of green/grey “skin” on her face, it feels more art-house cinema. And when Jonny (played by Udo Kier, no stranger to horror or art films) shows up at the gas station drunk, sets his own hair on fire, then cuts off his own hand, The German Chainsaw Massacre fully enters the realm of the bizarre. 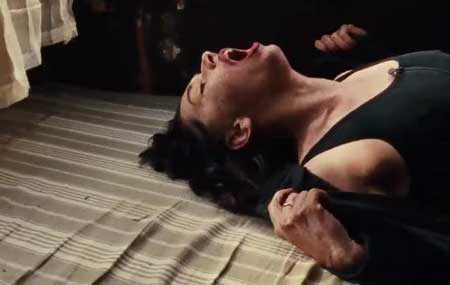 This isn’t in any way a direct copy of, nor a German remake of, The Texas Chainsaw Massacre, but there are a handful of scenes that pay homage to the American classic. The Family feels very familiar, as do some of the chase scenes, complete with swinging chainsaw and girl falling to the ground as she tries to escape a madman. Actually, this German “version” is far more gory than the 1974 classic, with plenty of blood and entrails to keep the attention of anyone not interested in the political commentary that is barely beneath the surface of this homage to the splatter genre. 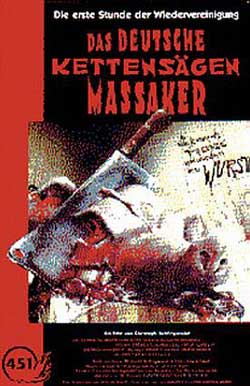 I’ll be honest, I had never heard of this director before, but after seeing this, as well as the short trailer before the film for another of his movies, Terror 2000, I have become a tentative fan of Christoph Schlingensief. The German Chainsaw Massacre is weird enough to grab my attention and balances a line of horror and art throughout that kept me watching until the end. The social commentary is obvious enough to not miss, but not so preachy that it distracts from the bizarro plot.