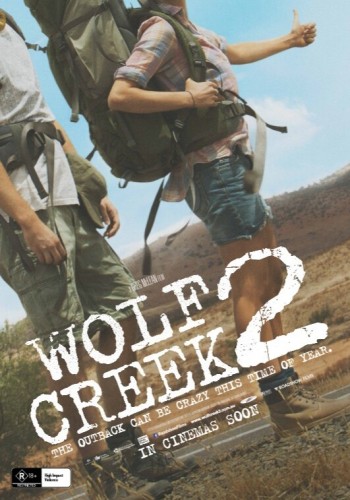 Greg McLean’s 2005 film WOLF CREEK is one of the most frightening films that I have seen of late.  It is not one that I expected to see followed up by a sequel.  The trailer for WOLF CREEK 2 is reportedly going to premiere on Monday, October 21, 2013.  In the meantime, here is a look at the official Australian poster for the film.

The official synopsis of the film is as follows:  Lured by the promise of an Australian holiday, backpackers Rutger, Katarina, and Paul visit the notorious Wolf Creek Crater. Their dream Outback adventure soon becomes a horrific reality when they encounter the site’s most infamous local, the last man any traveler to the region ever wants to meet: Mick Taylor (John Jarratt).

As the backpackers flee, Mick pursues them on an epic white knuckled rampage across hostile wasteland. Only one will remain to be dragged back to his lair to witness the true magnitude of his monstrosity. And if the last man standing is to have any hope of surviving where no one else has survived before, he’ll have to use every ounce of cunning to outwit the man behind the monster and become every bit as ruthless as the monster inside the man.