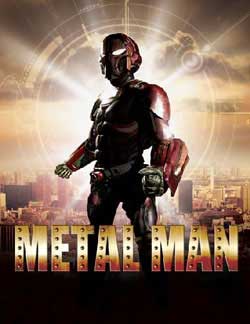 Kyle is your normal college student; he still lives at home with his parents. He still crushes on the girl that he is never going to get and he likes to spend his time playing video games. Kyle however is also a genius that not only plays video games but he also makes them, he also uses his smarts while helping his friend Dr Blake with his experiments. Kyle should have seen what was coming however when Dr. Blake suddenly put the poor boy in some kind of super soldier suit…

“See snakes they lie in wait..they don’t move..they don’t blink and when you lower your trust they strike you with their venomous fangs and drain the life out of you!”

My first reaction to the beginning of Metal Man was simply my eyes rolling and saying to myself…”oh what in the Hell have I gotten myself into this time?” I really am glad however that I continued to let the film play and didn’t judge it based on my first impression, well actually I probably would have if I hadn’t seen that Reggie Bannister is in the film, and luckily he carries it.

Metal Man plays out like a comic book put on screen, even the costume for the “Metal Man” looks like a crossbreed of a Power Ranger and an Iron Man Halloween costume. Yes the budget on this one is pretty low and the content comes once again screaming out of that stack of comics you have hidden under your bed but you know what….it really isn’t that bad.

Kyle is your average college student who still lives at home with his parents. Kyle is also really smart he has already created a video game which he calls Bio Death. Scenes from this game occur after the credit sequence and definitely will cause many an eye to roll thinking that they are about to watch another craptastic CGI filled turd of a film, luckily the CGI battle doesn’t last very long as my patience with the films intro was wearing pretty thin.

Kyle constantly runs late to school on Wednesdays because he makes it a point to casually run into a girl named Julie. During their conversation it becomes apparent that the two of them also have a class together, but she’s a rebel and is deciding not to go. After their brief encounter Kyle quickly goes to see Dr. Blake.

Dr. Blake is played by Reggie Bannister and Reggie is in typical “big brother Reggie” mode in this role. Dr. Blake has been conducting some experiments involving a super suit that he quickly gets Kyle into. Their experiment today is to see how much cold the suit can withstand before Kyle cannot take it anymore. Dr. Blake quickly pushes the young kid into a walk in freezer and points to a keypad on the wall stating that will be the only communication that the two of them are going to have while the experiment is going on.

After Dr. Blake closes the door a man name Sebastian Reed shows up with a couple of goons. Apparently Dr. Blake has stolen the helmet that is the most important part of the suit and Mr. Reed and his goons want it back, besides Dr. Blake’s version of the helmet is missing two important chips that would cause it to have its full power, chips that Mr. Reed does have. Dr. Blake takes advantage of the situation and quickly sends Kyle a pattern of numbers which Kyle says aloud, by doing this Kyle has now caused the suit and the helmet to become permanently attached to his body (I told ya it was like a comic book). The goons start to rough up Dr. Blake pretty good and even hit him across the head with a copy of the same helmet that Kyle is wearing, after the goons leave Dr. Blake uses what strength he has and pulls young Kyle out of the walk in freezer. Only after pulling Kyle out does Dr. Blake die, great I thought to myself no more Reggie….but alas Dr. Blake has programmed an artificial intelligence version of himself inside of the helmet!

The AI Dr. Blake starts to teach Kyle how to use his new found powers and after Kyle finds out that Sebastian Reed and his goons have attacked his parents its time for these new powers to be put to good use.

Metal Man is what is and that is a whole lot of fun, it caused me several times to start smiling and remember the days of yesterday and Saturday morning Ultra Man episodes (for you youngsters think of the Power Rangers). The movie is the perfect outlet for horror fans who are parents to show their children because there really isn’t any gore or blood at all in fact the fight scenes really do look like those old Saturday morning television shows.

Kyle starts to gain all sorts of powers as the movie progresses; in fact it seems he always just finds out about a new power just in the nick of time. These powers aren’t limited to a stealth mode (which lets him look like himself without the power suit on), invisibility, he can morph his appearance, he’s bullet proof and near the end of the movie he even shoots lasers and flies.

The characters in the film are also very stereotypical and what one would expect to find in a film like this. Sebastian Reed is a jerk who employs a young sexpot named Marissa by force, he kidnaps Kyle’s crush Julie, he even forces Marissa’s assistant to put on the decoy helmet causing her head to explode in one of the only scenes containing blood.

Gore hounds really aren’t going to like Metal Man but anyone who wants to embrace their inner child and relive those wonderful afternoons of yesteryear are going to enjoy this one.