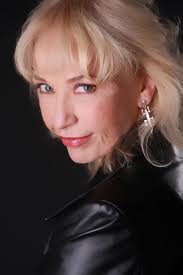 Janel- As an introduction, could you tell us a little about yourself?
Rosemary Ellen Guiley is one of the leading experts on the paranormal with more than 50 books published by major houses on a wide range of paranormal, spiritual, and mystical topics, including nine single-volume encyclopedias. Her work is translated into 15 languages. She has worked full-time in the paranormal since 1983, researching, investigating, writing, and presenting, and teaching. Her present work focuses inter-dimensional entity contact experiences of all kinds, technological and mediumistic spirit communications, spiritual growth and development, problem hauntings, and “portals,” or geographic areas of intense paranormal activity. She spends a great deal of her time out in the field conducting investigations and research. She has done ground-breaking research on Shadow People and the Djinn.
Rosemary has studied energy healing, and completed advanced training in bioenergy under Mietek and Margaret Wierkus, Level One Soul Healing under Francesca Szarnicki, and Therapeutic Touch under Dolores Krieger. She is an initiate in Johrei energy healing. She is a reader and teacher of the Tarot, and is co-author with Robert Michael Place of The Alchemical Tarot and The Angels Tarot. She conducts dreamwork, intuition development and past-life recall sessions.

Rosemary heads her own multi-media company, Visionary Living, Inc., through which she publishes some of her work in a variety of formats, and also an e-newsletter, Strange Dimensions. She has regular radio features on “Exploring Unexplained Phenomena” with Scott Colborn, and “The Conspiracy Show” with Richard Syrett. She is a frequent guest with George Noory on “Coast to Coast AM,” with whom she co-authored Talking to the Dead, about emerging technology for communicating with the dead and other beings. She is featured in documentaries and docu-dramas on the History, A&E, SyFy, Discovery, Animal Planet, and Travel channels. In addition, she is a popular speaker at conferences, colleges and universities.
Rosemary is a consulting editor of FATE magazine, and a board director of the National Museum of Mysteries and Research, a nonprofit educational organization in Columbia, Pennsylvania. She is a past board of director of International Association for the Study of Dreams, and a past member of the board of trustees of the Academy of Religion and Psychical Research (now the Academy of Spirituality and Paranormal Studies). She lives in Connecticut.

DREAMS & INTUITION
Dream Messages from the Afterlife. Visionary Living, Inc., 2013.
Rosemary Ellen Guiley’s Pocket Dream Guide & Dictionary. Visionary Living, Inc., 2011 (e-book), 2013 (trade).
Dreams and Astral Travel. Part of the Mysteries, Legends and Unexplained Phenomena series. Young Adult. Chelsea House/Facts On File, 2009.
The Tao of Dreaming. Co-authored with Sheryl Martin, OMD. Berkley, 2005.
The Dreamer’s Way: Using Proactive Dreaming for Creativity and Healing. Berkley, 2004.
Dreamspeak: How To Understand the Messages in Your Dreams. Berkley, 2001.
Dreamwork for the Soul. Berkley, 1998.
The Encyclopedia of Dreams: Symbols and Interpretations. Crossroad, 1993; Berkley, 1995.
Breakthrough Intuition: How To Achieve A Life of Abundance by Listening to the Voice Within. Berkley, 2001.

PARANORMAL PHENOMENA
Rosemary Ellen Guiley’s Guide to the Dark Side of the Paranormal. Visionary Living, Inc. 2011 (e-book), 2012 (trade).
The Atlas of the Mysterious in North America. Facts On File, 1994.
Harper’s Encyclopedia of Mystical and Paranormal Experience. Harper San Francisco, 1991.
Moonscapes: A Celebration of Lunar Astronomy, Magic, Legend and Lore. Prentice-Hall, 1991.

DEMONS
The Encyclopedia of Demons. Facts On File, 2009.

MAGIC & ALCHEMY
The Encyclopedia of Magic and Alchemy. Facts On File, 2006. 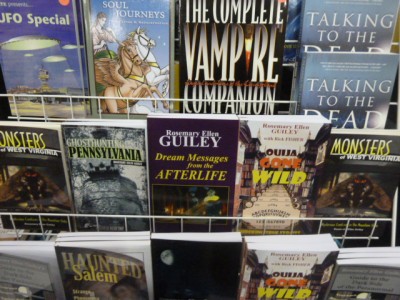 Janel – What inspired you to get into the line of work you do?

Rosemary – A personal statement from Rosemary:
Like many people, my interest in the paranormal began in childhood, inspired by experiences, extraordinary dreams, an intense interest in astronomy, and a voracious reading of nonfiction and fiction related to the paranormal, occult, science fiction and fantasy. My interests were always wide-ranging, and that continues to characterize my research and work today. All things in the paranormal and metaphysical realms are interconnected. My research includes history, mythology, folklore, religion, occult traditions, psychology, parapsychology, science, medicine, anthropology, and archaeology, as well as anecdotal experience.
My work is oriented around the how and why of our extraordinary experiences. It was clear to me early in life that the paranormal and the unseen realms are real, and that human beings have encounters and experiences that have been documented since ancient times. Our experiences form patterns throughout history that reveal our constant interaction with dimensions of the afterlife, spirit, the Divine, and a wide range of beings.
I examine both the light and dark sides of our experiences, from the mystical and angelic to the invasive and demonic. To know one side, you must also know the other.

Janel – You have studied all aspects of the paranormal, which do you think is the most difficult and why?
Rosemary – I don’t really think of the field or any part of it as “difficult.”

Janel – Have you ever had something happened to you that you can share?
Rosemary – I’ve had quite a few experiences in 30 years in every area that I have researched. I don’t think that singling one out of context would illuminate much.

Janel – What advice do you have for people who have had paranormal experiences and are afraid to share their experiences?
Rosemary – By talking about them, you learn that others have the same or similar experiences, which can be quite helpful to many. 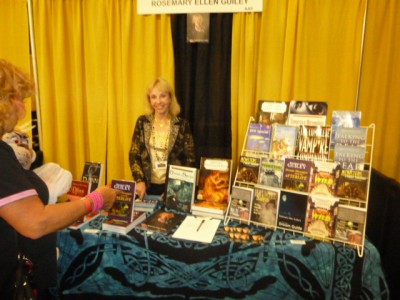 Janel – Do you feel that there are other beings besides “human beings?” and what forms do you believe they manifest as?
Rosemary – There are many beings who share the planet with us, and they reside in parallel dimensions attached to earth. They have multitudes of forms: as W.B. Yeats once said about the fairies, they appear as they want to appear and as our minds are capable of perceiving them. We give them many names: fairies, elementals, demons, angels, mysterious creatures, aliens and more. We may also be visited by beings from other planets, and so they would be extraterrestrials.

Janel – Tell us about your latest book or project?
Rosemary – Dream Messages from the Afterlife
Back jacket copy –
We can have contact with the dead, and the most common and powerful way is in dreams. This book is a ground-breaking validation of dreams that reach into the afterlife for reunions, messages, and previews of what lies beyond earthly life.
Reassurances, farewells, closures, unfinished business, the healing of grief, and vistas of heaven are among the topics featured. Real-life accounts of dramatic afterlife dreams demonstrate the enduring bond of love that never breaks, even in death. Also included are touching stories of pets that make contact with their owners in vivid dreams and visions.
Learn about the unique characteristics of afterlife dreams, their ancient legacy, their relationship to near-death experiences and out-of-body experiences, and how they can transform consciousness.

Janel – How do you feel about conventions and how has your experience been at Parafest?
Rosemary – Conventions are a good way to reach audiences, network and conduct research. Parafest was a great experience.

Janel – You write about everything from Ghosts to Werewolves, what has been your favorite topic to write about?
Rosemary – I really do not have a favorite – I find everything fascinating, in all areas of the paranormal, metaphysical and spiritual.
Janel – You have a book out called Ouija Gone Wild; do you believe that Ouija boards work? Do you feel they are a reliable communication resource for “spirits” to come through?
Rosemary – Ouija boards work, but like all spirit communications devices, they are not reliable, in that one never knows what one will get, if anything. They are neutral and will not produce automatic bad experiences. People have both positive and negative experiences with them, but that applies to all sorts of paranormal activity.

Janel – What is next for you Rosemary? Upcoming projects, conventions?
Rosemary – I am always busy in the fall with events and lectures, and I post upcoming events on my home page at visionaryliving.com, and in my newsletter, Strange Dimensions. I am at work on another book about the Djinn, as well as several others on different topics. I usually don’t discuss them much while they are works in progress.

Janel – What do you feel the dark side or downside to paranormal is and how would you best explain the difference between good and benevolent paranormal activity?
Rosemary – The dark side of the paranormal is anything that is harmful to people, which can cover quite a range of things, as people have different levels of tolerance. What bothers one person will not bother another. There are entities whose intentions are mischievous and harmful. Human beings can wreak havoc on one another by misusing occult abilities. The dark side should not be feared, but should be dealt with as one would deal with any problem or obstacle. People tend to fear “dark” things, but fear only makes situations worse.

Janel – You talk a lot about “Djinn,” could you explain the origin and background of the Djinn and is it good energy or bad energy?
Rosemary – See tutorials on djinnuniverse.com for origins, background, etc.. The Djinn are, like humans, of varying temperments, good bad and ugly.
Back jacket copy from The Djinn Connection –
Could a single entity be responsible for a multitude of our paranormal experiences throughout history?

Drawing upon her decades of extensive research in all facets of the paranormal, Rosemary Ellen Guiley makes a compelling case that our interactions with spirits, extraterrestrials, shadow figures, ancient aliens, demi-gods and human-creature hybrids all involve the mysterious Djinn.
The Djinn are little-known in the West beyond folk tales of genies in lamps and bottles, but they are real and active in our world. They are a race of powerful, masterful shape-shifters who exist in a dimension parallel to ours. Humans have had millennia of intense engagements with the Djinn, who disguise themselves in the forms of many different entities in order to keep themselves and their true motives hidden. Some of their motives are not in our best interests.
The Djinn are not the only beings interacting with humans, but their giant shadow falls across every part of our paranormal and entity contact experiences, including bedroom invasions, alien abductions, and genetics manipulators from other worlds.
The Djinn are significant force in the destiny of human beings. In The Djinn Connection, Guiley explains what we need to know – and how we should respond.

Janel – There are so many different “dream guides” out there, how would you advise people to thoroughly analyze their dreams and what sources would you advise?
Rosemary – My Pocket Dream Guide & Dictionary has useful tools for interpreting dreams through a process of association.

Back jacket copy for the dream book –
Your dreams are speaking to you – are you listening? We get important messages about life from our dreams that can help us make decisions, face circumstances, and even heal emotionally and physically.

Dreams speak in dramatic symbols. No matter how strange they seem, they make sense and speak the truth. Dreamwork reveals the meaning of dreams.

This powerful pocket guide will tell you everything you need to know about how to understand the meaning of your dreams, and also how to improve your dream recall. A dictionary of more than 1000 symbols is included to help you explore the exciting world of your dreams.

Dreamwork is easy and fun as well as beneficial. Working with your dreams strengthens your intuition and enhances your creativity, self-esteem and self-empowerment. Take advantage of one of your best sources of guidance and inspiration!

Janel – Do you believe in reincarnation and why?
Rosemary – Yes because it is the only explanation that makes sense of life and the immortality of the soul.

Janel – What has been your strangest experience in your line of work?
Rosemary – The Shadow People.
Janel – What was the most haunted town or city you visited and could you share an experience?
Rosemary – All places have haunts, so I cannot single out a city or town. One of the most haunted locations in the U.S. is Waverly Hills Sanitarium in Louisville, KY. It has many ghosts and Shadow People.