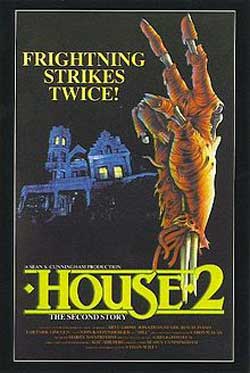 The new owner of a sinister house gets involved with reanimated corpses and demons searching for an ancient Aztec skull with magic powers.

The original House was an underrated gem of a film that married the clever narrative of films like Jacob’s Ladder with the outrageous campiness of Evil Dead II, long before either film was released. It borrowed heavily from films released around that era, using tried and tested motifs in order to make a quick and easy sell. And while the entire film played out like nothing more than a pastiche of 80s horror, it was so much fun that it didn’t really matter so much. 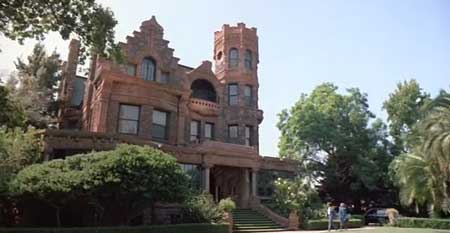 House II is similar in many respects, but it abandons the horror elements altogether, replacing them instead with childish fantasy. Claymation dinosaurs, animal side-kicks and a zombie prospector from the Old West are just some of the spectacles on show. And while it’s still as much fun as the original, it screams out for a much more naïve audience than the original was aimed at.

After inheriting an old mansion from his parents, Jesse, played endearingly enough by Arye Gross, moves in, along with his girlfriend and best friend Charlie (Jonathan Stark). While exploring the rooms, he discovers an old photo of his grandfather holding a Crystal Skull. What follows is a nonsensical parade of spectacle, fantasy and adventure (and it still manages to make more sense than the 4th Indiana Jones movie). 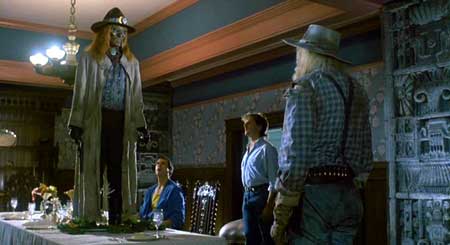 In order to illustrate my main point, I’d like to describe a scene that occurs late in the film. Jesse approaches a window and sees, on the other side, a place he needs to be. He pulls the curtain aside fully and then, after a moments hesitation, dives headfirst through the window.

No one is chasing Jesse at this point, and it seems fairly likely that the window itself would have hinges. And even if it didn’t, there were plenty of chairs about with which he could have broken the glass first and saved himself a lot of effort. The point is, House II has a paranoid fear of boring its audience, so it sacrifices dull elements like logic and common sense in favour of flashy noises and special effects. Admittedly, this is the case with a lot of horror or fantasy films, but whereas many of those films step over the line gingerly, House II drives over it on a motorbike while swigging a bottle of cheap whiskey.

Everything happens at breakneck speed, with the characters barely being introduced before the Indian graveyard is discovered and all hell breaks loose.
A ridiculous amount of time is spent trying to find the Crystal Skull, which inexplicably keeps Jesse’s zombie grandfather alive. Yet, no one ever takes the time out from their adventures to consider just how utterly ridiculous that kind of motivation is! 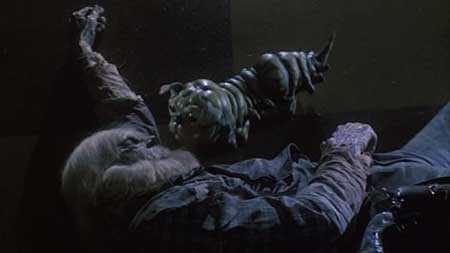 As a result, the only people who are given any real time to shine are Gross and Stark, with the rest of the cast sidelined because they refuse to hop on the wacky adventure express. In fact, it gets so childish and unrefined towards the end that an alternative ending in which Jesse has had a nervous breakdown and everything we see is his fever induced hallucinations wouldn’t be all that unusual. 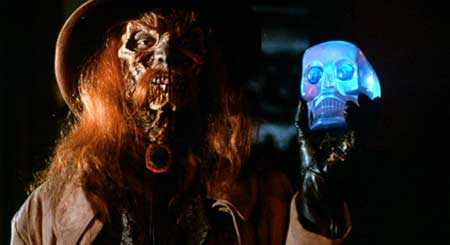 However, as mentioned, the fun is in the spectacle, and House II only occasionally struggles in keeping your brain anaesthetised. Jesse and Charlie play off each other nicely, they’re likable characters and their banter is fairly amusing throughout. However, it’s John Ratzenberger, best known for voicing Hamm in the Toy Story movies, who steals the show, making a brief cameo in an inspired role as Bill the electrician. Nuanced, wise-cracking and lending a perfect air of mystery to the film as a whole, it’s a real shame that he doesn’t feature more, as he would have balanced out the group nicely. In an ideal world, he would replace Gramps as the central comic relief, because the Old Prospector in modern day is such a clichéd gag, they were probably making that same joke shortly after the car was invented. 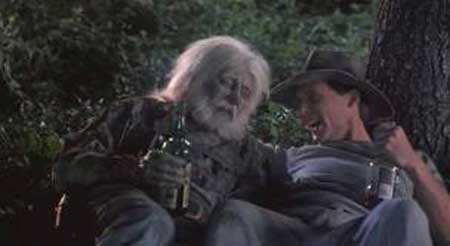 Overall, House II takes an almost identical approach to that of the original, but it replaces camp horror for just plain camp. The lack of logic is far more apparent, but if you can forgive that, as well as the utter lack of scares, it still remains a mindlessly fun way to spend an evening with your kids (provided your kids are a little bit strange).