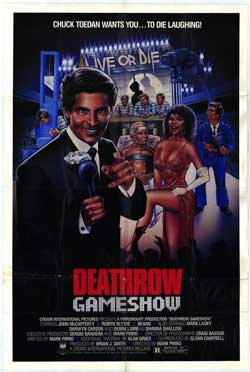 The host of a controversial TV game show that features the deaths of its death row inmate contestants deals with hate mail, protestors, and an angry mob family who have put a hit out on him for killing one of their own on national television.

There are a ton of idiotic reality shows on TV these days (why are they called reality shows when 99.9% of them are obviously badly scripted?) and many people believe that it is only a matter of time before a show like the one featured in Deathrow Gameshow happens. How would you feel about seeing prisoners being killed on a televised game show? Would you enjoy it? Would you be offended? The people behind this film knew that there would be different public opinions about such a game show and took a tongue in cheek approach at looking at such a serious situation. And you know what? It works.

At first glance I was ready to dismiss it as a cheap knock off of The Running Man so I went into it with pretty low expectations. My to my surprise though I ended up really liking it and part of me actually enjoyed it much more than I ever did that old Schwarzenegger flick (which doesn’t hold up very well as I discovered when I watched it again recently). I thought that Deathrow Gameshow was a fun (and funny) movie that was well-written and a little ahead of its time in a lot of ways. 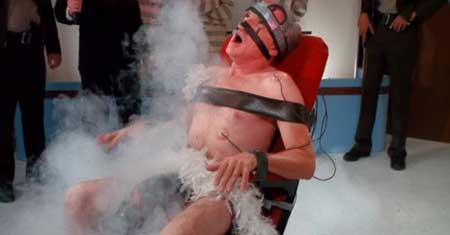 One of the things that really works for the film is the fact that it is actually funny. The writing is witty and quirky, and you have to listen very closely at times or you will miss something that the writers snuck in somewhere (such as the horribly wrong-but very funny-ad on the radio at one point that tells listeners why they shouldn’t drink or drive that had me laughing my ass off when I heard it). Unlike the painfully bad horseshit that the Wayans Brothers and whoever it is that is is responsible for turds such as Date Movie, Disaster Movie and the like keep churning out this movie is funny and will succeed in making you laugh. I hate most comedies (especially recent ones) with a fiery passion because I think that the biggest majority of them are stupid, pointless, and obnoxious, so you know one is good when I admit to liking it. 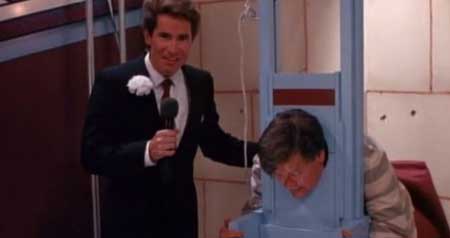 I think that John McCafferty (who reminded me a lot of Ted McGinley for some reason) ruled in the starring role of Chuck. He does an awesome job of playing the obnoxious, arrogant, sleazy game show host and even though he is a total and complete asshole I couldn’t help but like him. I’m sure that he had a lot of fun playing the part and he really delivers. Robin Blythe does an equally impressive job as Gloria Sternvirgin (gotta love that last name), who heads a group of protestors that want Chuck’s show taken off the air (only to become his major love interest later on in the movie). Of course Beano (this is really the guy’s name, did he start the company that makes those pills of the same name that keep you from farting?) is excellent as the rude, disgusting, and classless mama’s boy/hit man Luigi and he owns every scene that he is in (especially when he is on his “lunch date” with Gloria). 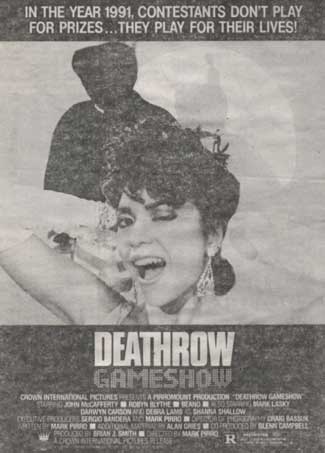 I had a blast watching Deathrow Gameshow and thought that it was just kick ass on a number of levels. If I didn’t know any better I would swear that Lloyd Kaufman and his crew were responsible for the film as it reminded me a lot of a Troma movie thanks to its sense of humor and the way that it was written (which is a compliment as I love Troma). It has many hilarious scenes (the one that revolves around a man f*cking a baked turkey is probably the best just because it is so weird and out there and is one of the funniest things I’ve seen in a very long time), an interesting plot, and likable characters. If you like movies with just the right amount of comedy and haven’t seen this film I suggest that you check it out as soon as you can as you won’t be disappointed. 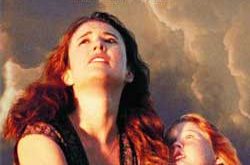