SYNOPSIS:
“The film tells of the eagerness and hardships of the sea captain Herr Avanti Planetaros, now reconverted into a space captain, and his project of a trip to Mars. Before embarking on his particular space odyssey, Captain Planetaros will have to bear the incredulity and the scorn of many conservative astronomers, especially Professor Dubius. In spite of such indifference and after many troubles and years of work, the spaceship ‘Excelsior’ is finally constructed and Captain Planetaro’s trip to Mars goes from dream to reality. Once on Mars, Captain Planetaros and his crew finds an advanced society in which peace is a way of life among its citizens.” (courtesy IMDB)

REVIEW:
Told in often startling images and beautifully composed by director Forest Holger-Madsen, A Trip To Mars (1918) – also known as Himmelskibet or Heaven Ship – is not meant to be an exercise in special effects, nor is it a fanciful recreation of alien worlds like the Georges Méliès film Trip To The Moon (1902). Rather, it uses the idea of Mars as a metaphor, as part of a thoughtful meditation on the notion of the ideal human society, not unlike Thomas More‘s ‘Utopia’ or James Hilton‘s ‘Shangri-La’. Largely forgotten nowadays, A Trip To Mars was an expensive major production in Denmark at the time, boasting some massive amazing sets and Martian exteriors filmed in a rock quarry near Copenhagen.

Avanti Planetaros (Gunnar Tolenaes) is an adventurer who has just returned from commanding an important expedition. He is greeted by his sister Corona (Zanny Peterson) and his Professor father (Nicolai Neiiendam), an astronomer who tells his son that space is the final frontier: “In space, there are thousands of mysteries, planets that we long for, and that long for us!” Recruiting his sister’s boyfriend Doctor Krafft (Alf Blutecher), Avanti plans to build a craft capable to traveling to Mars, much to the amusement of rival Professor Dubius (Frederick Jacobsen). Avanti puts the call out for volunteers to accompany him to Mars and soon has his crew, including a loudmouth American named David Dane (Svend Kornbech) and an unidentified Asian: “The East salutes you and sends me as its member on the great voyage!”

The night before take-off everyone gathers for a formal chicken-and-champagne party and, at dawn, the Heaven Ship is dramatically revealed, looking a little like a stubby zeppelin with box wings and a propeller, with the word Excelsior written in big letters across its fuselage. One amazingly accurate prediction that few other space travel movies refer to is the duration of the trip and the boredom involved. The film cuts to six months later and the spaceship is still on its way to Mars, the crew are beginning to develop ‘cabin fever’ and Dane is considering mutiny. Just in the nick of time, the Martians spot the ship and appear to use a type of tractor beam to bring the ship safely in to land. The crew prepare to exit by donning oxygen masks but soon dispose of them: “We can easily breathe in this atmosphere!”

The local Martian population turn out to greet the humans and, like all peaceful advanced races, they wear flowing togas, strange hats and are, of course, telepathic. The visitors are taken to the dining garden, were Avanti is surprised to discover that the Martians are vegetarians. He happens to have a can of food brought from the Excelsior, and the Martian Wise Man (Philip Bech) is repelled. “Dead meat? How did you procure it?” In a prime example of political incorrectness, Avanti demonstrates immediately by pulling out a gun and shooting a passing bird. The loud gunshot brings more Martians, the humans panic and start throwing grenades which quickly shuts everyone up. The Wise Man’s daughter Marya (Lilly Jacobson) asks to be allowed to help the visitors, and shows the humans the history of Mars, revealing the Martians to be once warmongering barbarians who have since found peace and turned Mars into a paradise. 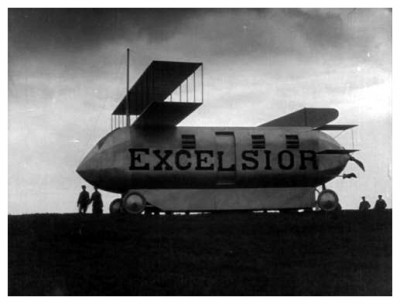 Avanti and Krafft are suddenly ‘born again’ and are given Robes Of Innocence. Avanti’s fascination for Marya deepens, and is brought to a head when the humans witness the Dance Of Chastity where he admits his love to Marya, but is told he must first sleep beneath the Tree Of Longing, retiring to the Forest Of Love where they declare their love for each other. Missing his girlfriend Corona, Krafft decides that it’s time to return to Earth, and Avanti allows Marya to accompany them. Her father, the Wise Man, heartily agrees and suddenly dies. Meanwhile back on Earth, certain that he has sent his son to his death with his wild words of worlds to conquer, Professor Planetaros is about to commit suicide when he hears the news that the Excelsior is on its way back to Earth. After making a successful landing during a terrible lightning storm, the crew are taken home where the Professor welcomes his new Martian daughter-in-law: “In you I greet the new generation – the flower of a superior civilisation, the seed of which shall be replanted in our earth – so that the ideals of love may grow strong and rich!”

Despite the grandiose production design, there is very little effort made to make anything unusual of the Martian landscape or the Martians themselves. This is deliberate – the aliens are different from the Earthlings purely by virtue of their moral superiority. Accordingly their world is classically styled, where togas are all the fashion and the social hierarchy conforms to Platonic ideals – the leaders are all philosophers and wise men. In researching this article I found some critics pointing out the film’s many absurdities and errors in logic: The sun looks the same size from Mars as it does from Earth; the Martian’s globe of the Earth has the North Pole at the top; the airship-style rocket has propellers and a horizontal trajectory; there are more. The film was conceived, of course, long before many of the realities of space travel were generally known, such as variations in atmospheric density and differing gravitational pressures.

A Trip To Mars was produced during a time when the First World War was showing little sign of ending and, in this respect, the film cannot fail to impress when seen as a plea for compassion and tolerance, featuring as it does perhaps the least antagonistic meeting of Martians and Earthlings in cinema history ever – that it is also among the very first of alien-human screen encounters makes it seem even more tragic. Finally restored and released on DVD in 2006 by the Danish Film Institute, critic Phil Hardy noted in The Overlook Film Encyclopedia (published 1994) that although A Trip To Mars marks the beginning of the science fiction sub-genre known as Space Opera, it was also the last science fiction film to be made in Denmark until Reptilicus (1962) reared its ugly head. And it’s with that melancholy thought in mind I’ll ask you to please join me again next week to have your innocence violated beyond description while I force you to submit to the frightening terrors of…Horror News! Toodles! 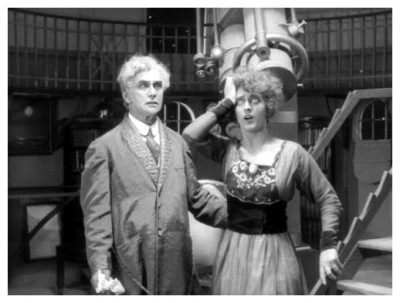