The first thing I noticed about The Old One by P. A. Douglas is the cover, an eye-catching, nightmare inducing painting by Alan Clark. His artwork may be familiar to the horror and bizarre reader, having graced the covers of books by Edward Lee, Cameron Pierce, and Stephen King, among others. It is a fascinating picture of a truly fear-inducing monster, a giant with more mouths than one might prefer. Take a look at the cover; we know how to kill a zombie, a vampire, a werewolf, but how are we going to stop THAT thing? And this is just the beginning. Keep that image in the back of your mind, because for the next two hundred or so pages, Douglas will be taking you on a horrifying, Lovecraftian ride through the middle of an island off the coast of North Carolina called Topsail. A tropical storm is raging down on the town, but to the people of Topsail, this is the least of their worries.

The Old One was put out in July of 2013 by Severed Press, a publisher specializing in horror fiction. Along with a couple of other books by Douglas, they have also released a good sized catalog of titles by authors such as Wrath James White, Shane McKenzie, Eric S. Brown, as well as many more. P. A. Douglas has released nine books, including The Dark Man, Hitchers, and Killer Koala Bears From Another Dimension. Coincidentally, he is also the cover artist of the previously reviewed Moosejaw Frontier by Chris Kelso.

The Old One is a nice breath of fresh air for me, as it is a fairly straight forward horror novel. Set in a very normal, everyone-knows-everyone kind of small town American setting, the story begins with tropical storm Faye bringing more than just rain and winds to the small island town of Topsail, NC. People are being attacked and subsequently controlled by what seem to be squid-like creatures. Rather than take its time setting up the city, our story kicks in immediately and keeps building steam throughout. After the creatures attack Max Willgood and his wife Hanna via their neighbors, leaving Hanna dead, the neighbors dead, and Max wondering what is going on, we begin the mission of figuring out what they are and how they can be stopped. Max’s neighbor George, J. J. the police officer, and conspiracy nut Tatter are just a handful of characters we grow to care for as hell comes to their small town.

With The Old One, author P. A. Douglas does so many things right. It is quickly established that we really don’t know who will survive and who will be killed. It doesn’t matter if it’s a main character or the equivalent of an extra, they all have equal chances to die in this world. But the tension, the thrill of wondering “who will survive?” is one of my favorite parts of this book. And let me tell you right now, the deaths aren’t pretty. They are gory, painful, miserable, and emotional deaths that you can’t just shake away as you turn the page.

A couple things really stood out to me here. I mentioned the word tension quite a few times already, but I will reiterate: there are some great tension-building scenes written on these pages. Unlike so many movies where they know just what to do, our protagonists find themselves split between options, not sure whether to hold out or try to escape, not sure who, if anyone, is still alive. Whether we are following people through the city, avoiding the morphing creatures as well as the elements, or hiding in a (seemingly) abandoned building, the tension keeps your eyes glued to the page. Add in the fact that we realize anyone could die a gruesome death at any moment, we’ve got ourselves a thrill ride.

Throughout The Old One we see things that seem somewhat familiar to die-hard horror fans such as ourselves. The set-up has the feel of a mixture of Slither and The Blob, but with the humor replaced by nerve-wracking terror. Once the squid creatures take over a body, making the people what in the book is referred to as “controlled,” they are very zombie like, all seemingly operating on a similar brain pattern. However, about halfway through the story, Douglas does something that I haven’t seen very often, something that makes the story that much creepier. A girl named Amanda is attacked and dies, becoming a controlled body. Instead of seeing her as a member of the swarming crowd, we get to instead see from inside her mind. We see her struggles with what she is doing against what she is thinking. This could have been a good, straightforward horror novel about an evil power that is wreaking havoc on a small town. Instead, it becomes a great horror story that not only gives us tension, suspense, gore, and monsters, but we get another perspective, a bonus level, if you will, an insight into how the monsters think and feel that we don’t often get. That alone sets this book above so many others in the pack.

I can’t recommend this book enough. It has a Lovecraft feel, but does not alienate those who are not so familiar with the writing of that legend of horror. It is well written, very evenly paced, and brings a lot of fresh ideas to the world of horror. And the end! I wish I could talk to you about the end. One of my favorite endings in quite a while. If I had anything to say I wasn’t a fan of, it was only the part of the afterword in which the author felt the need to explain himself to the audience for his choice of ending. No need to explain, sir, you’ve done right by us readers.

Tags P. A. Douglas Severed Press The Old One 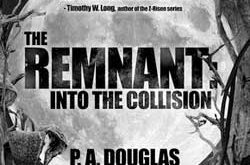