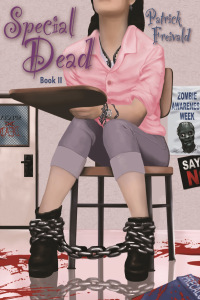 As the dust settles from the ill-fated high school prom Ani Romero and seven additional survivors have been held in a quarantine type environment to resume their studies. Far from the conventional curriculum the students have to cope with trigger itchy soldiers wielding flame throwers, outside radical protestors and continuous poking and prodding from Dr. Banerjee’s relentless experiments. Will the children rise above their infernal containment or will they ultimately succumb to the Special Dead?

Special Dead is the much anticipated sequel to the smash hit Twice Shy. Where a great deal of action unfolds as a result of a young girl struggling to fit in, this addition picks up the aftermath of the infamous Ohneka Falls High School Prom. This spooky-Sci-Fi odyssey mash up may very well make you think twice about your children’s forthcoming prom night.

Author Patrick Freivald captures the institution experience with haunting accuracy reflective of extensive research of sociological relationships that exist within the school system. Such flawless depictions reinforce an ironclad believability in the tale suggesting that perhaps some hands on experience had existed. After all, what better to write about, than what you know? As several loose ends are tied up and questions answered the most prominent question surfaces time and again, what if? Should any author achieve the ultimate question within their audience’s minds we’re onto something exceptional that translates unto countless generations.

The interpersonal relationships between Ani, Dr. Romero, Mike, Devon among others are explored further in depth. We get a certain sense of what makes each of the characters tick, what motives them and indication of how they cope in unspeakable conditions.

Underlining themes of conflict such as society versus the undead and government conspiracies breathes refreshing life unto the tale. The terror escalates to a tangible level. What ordinarily is perceived as far-fetched or contrived suddenly morphs into a harrowing sense of dread while enhancing a near surreal sense of realism.

The kill scenes are horrific ranging from torched alive to devoured into oblivion. Suffice to state there is something to whet the appetite of every horror fanatic. While the story may appear to cater to a young adult market, make no mistake about it Special Dead will appeal to a large fan base of horror fans and zombie buffs alike.

Ani’s progressive humanitarian dilemma accentuates the suspended climax as she feels remorse in varying emotions and stimuli that makes her even more admirable. We invest in what she’s going through and strive to see her succeed in page tearing, ravenous frenzy.

As the final act unfolds most will not anticipate the conclusion, eluding to a possible volume three of this zombie thrill ride of epic proportion.